Browse the article If I suck the venom out of a snakebite, will I live? 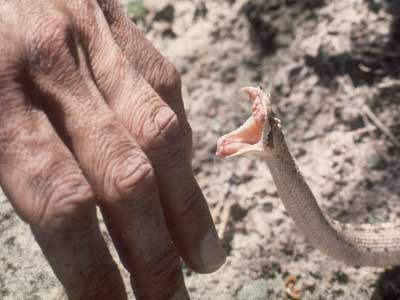 You're hiking with a friend. The sun is shining, the birds are singing -- you're feeling one with nature. Then the unthinkable happens -- as you step over a tree log on the trail, a snake beneath it lurches out and sinks its fangs into your calf. Out of all the panicky thoughts that race through your mind, one screams the loudest -- something you learned in the Scouts: If you get bitten by a snake, suck out the venom. Frantically, you turn to your friend and to tell him to start sucking, but he replies, "No way, man! Then we'll both die."

Is he right? Or, is he just a big coward who should be crossed off your friend list?

Here's your answer: Most likely, your friend wouldn't die from ingesting snake venom. But if he has an open wound in his mouth, the venom could enter his bloodstream, which is very dangerous. On the flipside, his mouth, like any human mouth, is stocked full of germs that could cause infection in your wound. So, either way you slice it, venom-sucking isn't a winning solution.

To understand how to treat -- and how not to treat -- a snakebite, you need to understand how venom affects your body. Note that we don't use the word "poison" when discussing snakebites. Poisons are toxic if you swallow or inhale them. Venoms, on the other hand, are only toxic if injected into soft tissues and the bloodstream. So, technically, if you suck the venom out of a snakebite and you don't have an open wound in your mouth, you won't be affected. But that doesn't mean you should do it! Although long considered a viable treatment, experts now strongly advise against sucking the venom out of a snakebite wound. What changed their minds? 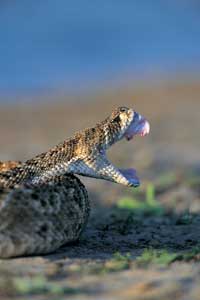 Before we discuss snakebite treatment, it's important to note that the chances of receiving a venomous snakebite are very low. Worldwide, there are between 1 and 2 million snakebite incidents per year. However, those numbers result in only 50,000 to 100,000 snakebite fatalities [source: Reptile Gardens] -- and remember, that's on the entire planet.

Within the United States, for example, just five percent -- about 25 species -- of snakes are venomous [source: NYP]. Rattlesnakes account for about 70 percent of venomous snakebites in the U.S. and for almost all of the snakebite deaths [source: Merck]. However, only one out of 50 million people in the U.S. will die each year from a snakebite [source: Johnson]. So relax.

How do you tell the difference between a venomous snake and a non-venomous snake? Many experts point to the snake's eyes. Non-venomous snakes have round pupils. Venomous snakes have elliptical pupils, like a cat's. Additionally, pit vipers, all of which are venomous, have a small hole or pit between the nostril and the eye. Of course, this information implies that you're supposed to bend over and peer into the creature's face, which wouldn't be very smart. The best and safest way to determine whether a snake is venomous is to familiarize yourself with the snakes local to your area and memorize their color bands or markings. For example, the venomous coral snake and the harmless milk snake, or scarlet snake, look nearly identical, except for the order of their red, black and yellow bands. To tell the difference, children are taught the rhyme, "Red touch black, venom lack. Red touch yellow, kill a fellow."

If a snake does bite you, look out for the symptoms of a venomous bite. Symptoms vary according to the size and species of snake. Pit vipers are the most common venomous snakes in the United States and include all rattlesnakes. The first symptom of a pit viper bite is usually pain, followed by redness and swelling within 20 to 30 minutes. Other signs include chills, fever, weakness, nausea or breathing difficulties. Also look out for blurred vision or droopy eyelid. Severe bruising can occur several hours after the bite. Coral snakebites, on the other hand, usually don't result in immediate pain. The symptoms may take several hours to develop and include tingling, muscle weakness, swallowing difficulties, excess saliva and potentially fatal breathing problems. You should always seek medical assistance immediately to determine whether the snake that bit you was venomous -- even if you're not in pain at the time.

You might be wondering how long it would take a venomous snakebite to kill you. It's hard to answer that question because there are so many variables involved. It depends on how much venom was released into your system, whether you go into shock, what your immune system can handle, how soon you seek treatment, how your body responds to treatment and the list goes on. But one thing's for certain: The sooner a snakebite receives medical attention, the better.

Prevention, of course, is the best medicine. Try to avoid areas where a snake might hide, like under rocks and logs. We probably don't have to tell you that it's not a good idea to pick up or tease snakes, even if you think they're not venomous. Don't provoke a snake, either. When you're hiking in snake-populated areas, wear long pants and boots. If you're about to step into an area where you can't see your feet (like heavy underbrush), tap first with a walking stick.

Instead of injecting botulism into their foreheads to reduce wrinkles, celebrities are now reaching for something even more bizarre -- snake venom. At $185 per ounce, the product UltraLuxe 9 uses simulated viper venom, which partially paralyzes the offending areas ... like the brain, perhaps. 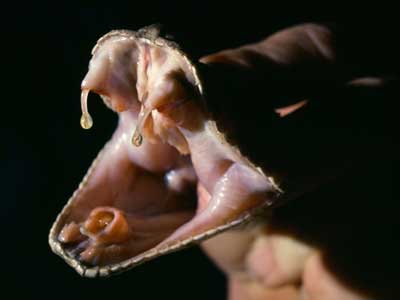 Until the past few years, the recommended first aid for a snakebite was to tourniquet the area above the bite, cut the skin open, suck out the venom and then spit it out. The reasoning behind this was that you could remove much of the venom before it had a chance to enter the victim's bloodstream. However, a study published in the New England Journal of Medicine in 2002 officially refuted this method [source: O'Connor]. Venom enters the bloodstream extremely quickly, and trying to suck it out is ineffective. The best way for a bite victim to prevent venom from quickly moving through the bloodstream is to remain calm, keep the wound below the heart, and avoid running or doing anything that would increase the heart rate.

Many first aid and snakebite kits contain a suction device for removing venom from a snakebite wound. These devices provide way more suction than your mouth ever could and don't require an incision (which is dangerous and could cause infection). Tip: If your snakebite kit contains instructions for making an incision on the wound, throw it away and buy a more current kit. Also note that the Annals of Emergency Medicine reported in 2004 that these commercially available extractors remove virtually no venom, just blood and other fluids [source: Alberts].

Using a tourniquet can damage nerves and blood flow. True story: In Tennessee, a well-meaning passerby used a tourniquet to help a farmer who'd been bitten by a snake. When the farmer arrived at the hospital, his blood pressure was so low from the tourniquet around his arm that he was only minutes from death [source: UPI]. Another treatment that's fallen out of favor is icing the bite area. Doctors advise against this, as it may cause the venom to stay in one place, which creates worse tissue damage than if the venom had spread out a bit.

Now, here's what you SHOULD do if a snake strikes:

The best first aid for snakebite is your cell phone. Calling ahead to an area hospital as the victim is on his or her way allows the medical team to prepare antivenin. Antivenin -- sometimes called antivenom -- is the primary way hospitals treat snakebites. It's very effective because the majority of snakebite victims in the United States manage to reach a medical facility within 30 minutes to two hours of being bitten [source: Juckett].