Browse the article How Skydiving Works 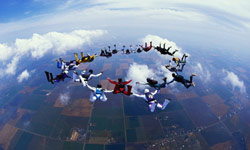 Skydiving is one of those things that you probably see­ all the tim­e. Pretty much every major soft drink has done a commercial with skydivers in it. Lots of action films feature skydivers. Skydiving appears in reality shows and is a mainsta­y of the military.

And it's easy to s­ee why. The sport definitely has an edge to it. There is something about leaping from a plane and falling through the air at 120 miles per hour that really gets people's attention.

­Have you ever wondered how skydiving works? What kind of equipment do skydivers use? How safe is skydiving as a sport? How do you become a skydiver and how much does it cost?

In this article, we will answer all of these questions and many more. The next time you watch someone skydiving on TV, you will have a whole new appreciation for what's going on!

Let's start by looking at what a typical jump is like for an experienced skydiver. 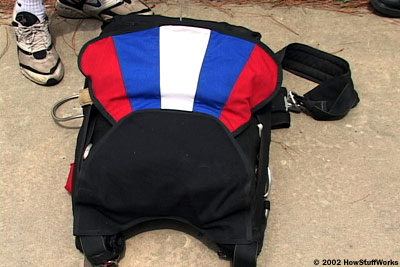 We've used a lot of terminology here -- let's look at some of the actual equipment that a skydiver uses. 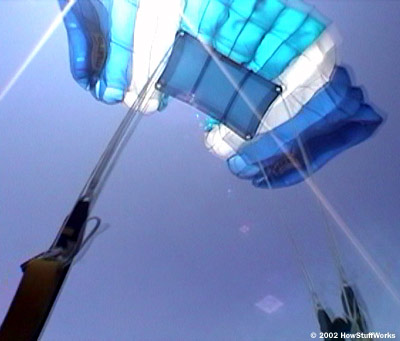 A parachute rig used by any sport skydiver today has six basic parts:

Just about everyone today uses ram-air canopies. This type of parachute is square or rectangular and is made completely out of lightweight nylon. There is a top and bottom sheet of nylon, and then a set of fabric ribs between them. The ribs divide the parachute into a set of individual cells. Air enters, or rams, into the front of the canopy to inflate the cells and give the parachute an airfoil shape. This shape makes the parachute act like a wing (see How Airplanes Work for a description of wings). Instead of coming straight down like you would with a round parachute, you actually glide in with a ram-air chute.

You also have a lot of control with a ram-air chute. You have two sets of lines connecting to the rear edge of the parachute on the left and right sides. You control these lines with two handles called toggles. When you pull on the left toggle, you lower the back part of the left side of the wing. This causes the left side of the parachute to slow down, so you turn to the left. You can turn to the right in the same way. If you pull both the left and right toggles together, it slows the whole wing down and acts like a brake. This allows you to flare to a stop during landing. This level of control makes extremely precise landings possible.

Next, we'll look at how a parachute is packed.

A parachute is like a little nylon machine with all of the parts designed for light weight, durability and as few problems as possible during deployment. Considering the speed at which a skydiver is typically free falling -- about 120 mph (193 kph) -- and the lack of options if something goes wrong, a parachute rig needs to be incredibly reliable.

There's a lot of popular interest in the fine art of parachute packing. It has all the elements of great drama -- a person is folding a piece of fabric and stuffing it into a very small bag, and there's another person whose life literally depends on that fabric unfolding properly. When a parachute deploys, it needs to:

The best way for a skydiver to make sure that all of this happens is to pack the parachute carefully and follow the manufacturer's folding instructions. Most experienced skydivers do their own packing, and it takes 10 to 15 minutes to do the job.

One of the things that makes modern parachute packing so interesting is the use of zero-porosity fabric. Zero-porosity means that the fabric has a coating so that air cannot move through it. Zero-P gives the canopy better performance, but it also means that it can be very hard to get all the air out of the parachute during folding.

Now let's take a detailed look at what happens when a parachute is deployed.

Big thanks to the people at the Raeford Parachute Center in Raeford, NC, for all of their help in creating this article (and for making my tandem jump so much fun!). 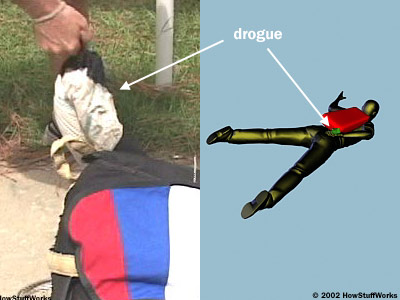 Here's what happens when a parachute deploys normally:

Next, we'll look at what happens when the parachute doesn't deploy correctly. 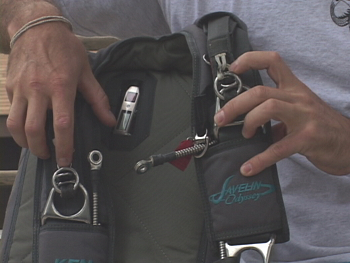 Click here to watch a short video of the three-ring release!

Let's say you try to deploy your main canopy and something goes wrong. For example:

In all of these cases, you have a canopy that you cannot use to land safely. You need to cut away the main canopy and deploy the reserve.

All modern rigs have a mechanism called a three-ring release that connects the main canopy to the container.

To cut away the main, you reach down and pull the release handle attached to one of your shoulder straps. This handle releases the lines on both risers simultaneously. You are now in free fall again. Then, one of two things happens:

In either case, you are praying that the reserve deploys cleanly and you have a good canopy when you get done. Most experienced skydivers pack their own parachutes, but it is common for the reserve chute to be packed by a certified rigger. Every few months, the reserve is unpacked and repacked to keep it from getting stiff.

There's not a lot of room for error in skydiving. Let's say that one of the following three things happens during a skydive:

In any of these situations, you may be unable to deploy your parachute yourself, and you need some help. An AAD (automatic activation device) is a small computer that constantly monitors the altitude and activates the reserve chute for you.

One of the best-known AADs is the CYPRES AAD. CYPRES is short for "Cybernetic Parachute Release System." According to the manufacturer, there are more than 65,000 CYPRES units in the field.

The CYPRES unit has four parts:

Only if the skydiver is in free fall at 750 feet will the CYPRES unit cut the reserve loop.

The skydiver turns on the CYPRES on the ground. The CYPRES computer takes a measurement of air pressure on the ground and uses this to determine the skydiver's altitude throughout the day. Whenever the skydiver is on the ground, the unit recalibrates every 30 seconds to handle weather-based changes in atmospheric pressure.

In the next section, we'll see how inexperienced skydivers get into the sport. 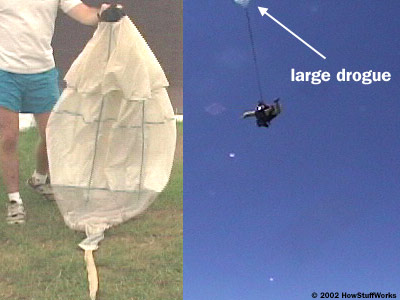 If you have never been skydiving before, one popular way to make the first jump is called tandem jumping. In a tandem jump, you get strapped to your instructor and the two of you fall together. The instructor carries one large parachute on his back -- big enough to support your weight and his together. Your instructor controls all aspects of the jump to make sure nothing goes wrong.

A typical tandem jump looks a lot like a normal jump. Here are the big differences:

One of the most popular skydiving techniques in use today is called Accelerated Free Fall (AFF). In the United States, the student might go through the following steps to become a licensed skydiver:

Once you have your A license, you are generally free to jump at most drop zones, and you pay $15 to $25 per jump.

Once you have your A license, there are many different variations on the basic "falling through the sky at 120 mph" theme:

There are also the professional aspects of skydiving, like teaching and stunt skydiving in movies and TV shows (see, for example, Joe Jennings Freefall Cinematography or SkydivingStunts.com).

Skydiving is a remarkably popular sport. The United States Parachuting Association has nearly 35,000 members. It estimates that about 350,000 people complete more than 3 million jumps in a typical year.

The big question is always, "How dangerous is skydiving?" In 2012, 19 people died in parachuting accidents in the United States, or roughly one person per 100,000 jumps. Look at the US Skydiving Incident Reports to get an idea of the types of problems that lead to fatalities. If you make one jump in a year, your chance of dying is 1 in 100,000.

How does the fatality rate in skydiving compare to other common activities? Since most adults in America drive cars, let's compare skydiving to driving. Roughly 34,000 people died in 2012 in traffic accidents in the United States ref. If you drive 10,000 miles per year, your chance of dying in a car wreck in any given year is something like 1 in 6,000. In other words, we accept a higher level of risk by getting into our cars every day than people do by occasionally skydiving. The fatality rate for skydiving is 0.006 per 1,000 jumps, according to the U.S. Parachute Association.

A logical question to ask here is this: Given these statistics, why do we think of skydiving as dangerous and driving a car as safe?

For more information on skydiving and related topics, check out the links on the next page.

Have you ever wondered why people yell "" when jumping out of a plane? According to The Straight Dope, it goes back to the 1940s, when a group of U.S. Army parachuters went to see a western movie to relieve some anxiety about the next day's jump. Click here to learn more.