Hollywood stuntman and professional skydiver Luke Aikins just became the first man to jump out of an airplane without a parachute or wingsuit, land safely and live to tell the tale. On Saturday, July 30, he didn't do so much as what people dream of doing — he lived the stuff of nightmares, and completely on purpose.

"My whole life's been dedicated to skydiving and pushing the boundaries," Aikins told the Associated Press before the jump, which took him 25,000 feet (7,620 meters) above the California desert.

That's 4.7 miles (7.6 kilometers) straight down — about a third the length of the island of Manhattan, or the width of parts of the Grand Canyon. At his maximum speed, Aikins plummeted at 120 mph (193 kph) for more than two minutes of freefall, eschewing the expected parachute and aiming for a 1,000-square-foot (929-square-meter) net. The super-flexible net absorbs the force of a parachute-free human body traveling at such high speeds, which would otherwise splatter into an instant-death situation upon impact.

Aikins, who's performed around 18,000 jumps over his lifetime, appeared in the Marvel superhero film "Iron Man 3" as well as the memorable skydiving sequence highlighted in the trailer for the 2014 "Godzilla" film.

The event, sponsored by the Stride chewing gum company and broadcast live on Fox, took two years of training and preparation. Before Aikins' plunge, the stuntman's wife Monica Aikins said she felt "a bit nervous," then followed that up by saying "and I'd be lying to say I'm not a lot nervous, but super confident about Luke's ability."

Good news, though — everything went off without a hitch, even though Aikins had to maneuver against an unexpected slight wind during the dive. He was accompanied by three other jumpers to film and provide any emergency assistance in the event of an emergency like a loss of consciousness. The jumping and falling was easy, actually, and the trickiest part came at the very last second, when Aikins had to flip his body to land with his back facing the net. Happily there were neither injuries nor deaths to report. Check out the full dive right here:

Now That's Interesting
The United States Parachuting Association estimates that about 350,000 people complete more than 3 million jumps in a typical year in the U.S. alone.

How Is the Black Lives Matter Movement Organized?

The Real Reason Turtles Have Shells (Hint, It's Not for Protection) 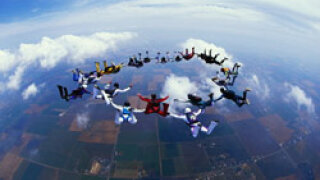 The Human Fly, or the Daredevil Who Made Evel Knievel Seem Sane 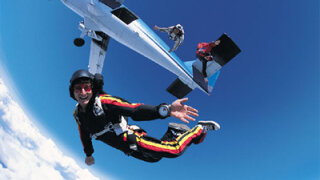 What if you fell out of an airplane without a parachute?