by Julia Layton
Prev NEXT
7 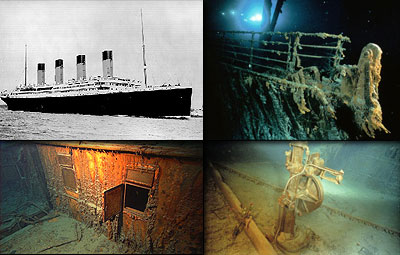 Clockwise from top left: The Titanic; bow and railing of the Titanic shipwreck; steering motor on the bridge; port side forward expansion joint on the boat deck of the bow section
Photo courtesy The Smithsonian Institution; Emory Kristof/National Geographic; NOAA—IFE/URI

Contrast the Sultana with a shipwreck that occurred almost half a century later in the icy waters of the North Atlantic, just south of Newfoundland. When the "unsinkable" Titanic wrecked in 1912, the whole world noticed. The steamship was the biggest and most luxurious passenger liner of her time, and some of the world's rich and famous had booked a room for her maiden voyage. On April 10, 1912, the Titanic left England with about 2,200 people onboard. On April 14, a lookout spotted an iceberg right ahead. Titanic reversed her engines and tried to turn away, but it was too late.

When Titanic hit the iceberg, it gouged 250 feet (83 yards) of the hull and popped out at least six rivets below the water line. Holes from those rivets flooded the first five watertight compartments at the front of the ship. Titanic could have stayed afloat if only four of those compartments had been flooded. Some surmise that Titanic would've remained afloat if she had hit the iceberg head-on instead of trying to turn, because then only the first and maybe second watertight compartments would have flooded.

The weight of the flooded compartments pulled Titanic head-first into the ocean. It ultimately took more than two hours for her to sink, with the ship breaking into at least two pieces in the process. There was a ship in the vicinity, just 10 miles away, but her wireless operator had already left his post for the night, so he didn't pick up Titanic's calls for help. More than 1,500 people died in the disaster. Many went down with the ship or died of hypothermia after jumping overboard into the frigid water. Fewer than 700 people survived the wreck of the Titanic.

It's possible that many more passengers could have survived, but Titanic didn't have enough lifeboats to accommodate everyone. She only carried enough lifeboats for 1,178 people, about half of the passengers onboard. At that time, laws about lifeboats were different -- the number of required lifeboats was determined by a ship's weight, not her passenger capacity (the disaster of the Titanic helped changed the laws regarding lifeboats). Titanic actually had more lifeboats than required by law. One of the many factors that made matters worse was that most of the available lifeboats were launched only half or a quarter full, and then only two out of the 18 launched lifeboats returned to rescue passengers from the water after the wreck.

In 1985, a crew led by Dr. Robert Ballard discovered the wreck of the Titanic. She remains on the ocean floor 323 nautical miles from the southern coast of Newfoundland.