The History of Shenandoah 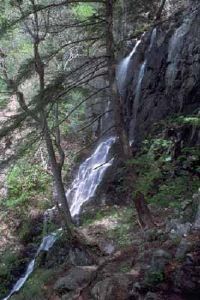 ©2006 National Park Service Thomas Jefferson, whose home in nearby Charlottesville looks out toward the Blue Ridge, much admired Dark Hallow Falls, a 70-foot cascade that flows through a rocky hollow near Big Meadows.

For many years, the so-called Blue Ridge was an insurmountable obstacle to our nation's westward expansion. Its mild eastern flank sloped down to the agricultural heartland of Virginia and farther east to the burgeoning towns and cities along the Atlantic coast. Pioneers who wanted to go west from here thought twice about the ruggedness of the ridge, its height, and the fact that there were no low-lying passes through it.

But the pioneers and adventurers who made it to the top of the ridge were greeted by a spectacular sight: the lovely Shenandoah Valley. This green paradise of endless forests and meadows cut by winding rivers and streams was so inviting that the valley itself seemed to hold all the promise of the West.

Shenandoah contains more artifacts of human history than most other national parks. It lies along a spectacular but populated section of the Blue Ridge that nearly cuts Virginia in two. Unlike most national parks, Shenandoah is a place where people have lived for many generations. The section of the great ridge encompassed by the park is crossed by few passes, and the imposing mountain range forced early pioneers through the Cumberland Gap and into broad Shenandoah Valley.

To make this area suitable for a national park, which was mandated by Congress in 1926, the Commonwealth of Virginia acquired an estimated 4,000 privately owned tracts of land in the Blue Ridge Mountains and Shenandoah Valley. The state then donated the land to the nation. No other park required the acquisition of so much private land or required the National Park Service to create a park out of land that had been so widely inhabited by people.

At the time it was established, much of the future parkland consisted of eroded hillsides, worn farmland, and thin second- or third-growth forests. Timber had been harvested from these woods since the early 18th century. But the people who worked these mountain areas would have to leave to make room for the park.

Some left by 1935, when the park was opened to the public, and in the next few years hundreds of families vacated the area, either voluntarily or by force. Many moved from their cabins and farmhouses to resettle outside the park's borders at government expense. A few mountain people continued to live in the park even after it opened, but they are all gone now.

Make the trek to Shenandoah National Park and explore this unique land. From hiking to camping to scenic driving, the activities available are sure to suit the needs of everyone in your traveling group.