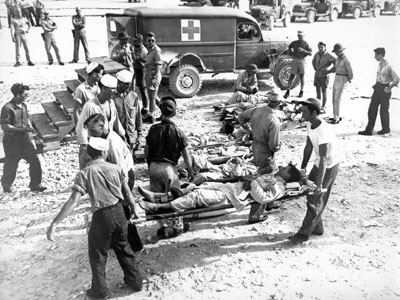 Survivors of the USS Indianapolis en route to a hospital following their rescue
Photo courtesy US Navy, National Archives

Eventually the shark let go of Doudt and he never saw it again. Although he feared a subsequent attack as he paddled for the shore, the shark swam off and did n­ot make a second strike. The shark probably realized that a surfer and surfboard would not make a good meal. Great whites are actually very picky about what they eat -- refusing to bite things that were not their usual prey, such as floating sheep carcasses, after an initial taste.

However, there are many species of sharks, and not every shark follows the same pattern. Circumstances can also change the pattern of attack. Shark attacks in deep sea water are usually not hit-and-run attacks. In these cases, where the victims are often the survivors of sinking ships or plane crashes, sharks circle the scene. They will then bump into victims on the outskirts of the group, or those that are already wounded, before making bite attacks.

One of the most famous shark attacks is that of the USS Indianapolis, sunk by Japanese torpedoes in the Pacific Ocean in 1945. It took several days for rescuers to reach the ship, because the mission had been so top secret that no one reported the ship missing. By the time Navy rescue craft arrived, only 317 men were still alive out of the almost 1,000 that survived the initial sinking. Tiger sharks were responsible for most of the deaths.

­­The bull shark is also noted for its atypi­cal attack behavior. It gets its name in part due to its tendency to attack persistently, hitting a target, circling, hitting again, and repeating. A 14-year-old girl who was recently involved in a fatal shark attack off of Florida's panhandle was hit by a bull shark that did not let go of her leg even when a rescuer reached the scene. It continued circling and attacking, even making a run at another rescuer.

We'll look at the damage a shark attack can cause in the next section.