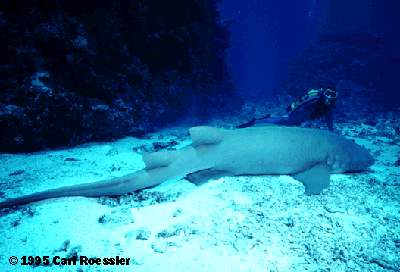 Att­acks have also frequently occurred when humans were spear fishing in ocean waters. Sharks are attracted to the signs given off by dying fish -- the smell of blood in the water a­nd the electrical impulses given off as the fish struggles. Sharks detect these signals with their ampullae of Lorenzini, a set of "detectors" under the skin on a shark's snout. The ampullae are electrically sensitive cells that connect to the skin's surface through small tubes. Once a shark arrives on the scene, it may become agitated and aggressive in the presence of so much food. A hungry, excited shark can easily mistake a human for its usual prey.

­There are cases in which sharks seem to attack out of aggression, rather than hunger. Very little is known about shark behavior, but it is believed that some species, including great whites, display dominance behavior over other sharks. This behavior can take the form of "punching" with the snout, or bites that don't do much damage to the tough skin of a shark. Unfortunately, when a shark makes a dominance display toward a human, these "gentle" bites can still cause horrendous damage.

Sometimes, the cause of a shark attack is simple to determine -- the shark is responding to human aggression. Nurse sharks, for example, are generally placid fish that lie still along the bottom of the ocean floor. For some reason, this makes some divers think that it's a good idea to pull their tails. Irritated nurse sharks have taught several divers to keep their hands to themselves. For this reason, shark attack statistics are divided between provoked and unprovoked attacks.

Movies like "Jaws" and historical accounts of attacks (like those in New Jersey in 1916) have given rise to the myth of the rogue shark. A rogue shark is one that decides for some reason that it really likes eating humans. It displays atypical behavior, appears outside its usual range, and makes additional attacks in the same area over the course of several days.

It is impossible to say that there are absolutely no rogue sharks -- individual sharks may exhibit strange behaviors, possibly because they are sick or injured. Differing ocean conditions can send sharks beyond their typical range as they follow their prey species.

However, there is no evidence to indicate that sharks ever "develop a taste for human flesh." Even if there is a series of attacks in one area, sharks tend to travel great distances in one day. That means the shark that made the first attack is probably hundreds of miles away when the second attack occurs. Scouring the area with fishing boats and killing sharks hours after an attack is unlikely to bring in the specific shark that attacked.