What if I wanted to visit all seven continents in one day?

Browse the article What if I wanted to visit all seven continents in one day?

First, you must think about a few things­. Where are you going? Where will you start your trip? Does "in one day" simply mean a 24-hour time period? Or do we use a broader sense -- and pay attention to the date, not the actual passage of time? And, last but not least, what mode of transportation should you use?

Your travel itinerary would include visits to each of the following continents:

You'd be covering an incredible distance on your journey. At first look, this seems impossible. But there are two ways you can manage a trip like this. Use an extremely fast mode of transportation, like the Concorde (if it were still in operation) or work with the interpretation of "in just one day." We'll take a look at the Concorde in just a minute, but first let's talk about an interesting loophole.

Everyone on the planet wants the sun to be at its highest point in the sky (crossing the meridian) at noon. If there were just one set time for the entire world, this would be impossible because the Earth rotates 15 degrees every hour. Therefore, the world is set up in time zones. The idea behind multiple time zones is to divide the world into 24 15-degree slices and set the clocks accordingly in each zone. All of the people in a given zone set their clocks the same way, and each zone is one hour different from the next. If you pay attention to the time zones, you can use them to your benefit when planning your trip. It will help you accomplish your task if you interpret "in just one day" to mean the date of your trip, not a 24-hour time period. Using the time zones, you can start somewhere in the east and move west. As you travel, you will actually be gaining additional hours for your journey because of the time change.

Where do I start? 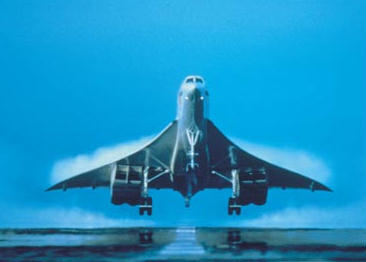 Photo courtesy British Airways
The Concorde, which is no longer in use, would be the only way to really make this trip a reality.

In 2003, before the Concorde was retired, the cost of a flight from London to New York cost about $5,100 one way. Even though chartering a Concorde for your trip would probably cost several million dollars -- for the benefit of this question, we'll assume you have the money and that the Concorde is still flying.

We've established that traveling a certain way will give us more time to work with, so the route will move east to west. You will start on Antarctica and fly to the Australian continent and them on to Asia. From there you will travel to the European continent and move to the continent of Africa. After that, it's on to the South American continent, with your final flight taking you to North America. The actual journey, from country to country, is as follows:

It turns out that the most difficult leg of the journey to plan is the first flight. Although there are more than 20 dedicated landing strips on Antarctica, they are mostly gravel or ice encrusted runways and would not accommodate a Concorde. The U.S. Air Force and the Royal New Zealand Air Force travel to and from a research area known as McMurdo Station and Christchurch, New Zealand. The weather can make take-offs and landings pretty difficult. So difficult in fact, that some flights from Christchurch to McMurdo Station are called "boomerangs" because they have to turn around mid-flight due to inclement weather. As you would imagine, the duration of flights varies depending on the weather, but the average flight takes between 6 and 7 hours. McMurdo Station and Christchurch observe the same time -- so let's say you take off from McMurdo at 10:30 a.m. -- you'll arrive in Christchurch at 5:00 p.m.

How long would it really take?

From this point on, let's say you have chartered a Concorde. The following grid shows the local departure time, duration of the flight, the time difference and arrival time for each leg of the journey. We were able to determine the duration of the flights based on the nautical miles between destinations and the fact that a Concorde can travel approximately 1,173 knots in one hour. For example, there are 5,082.35 nautical miles between Bangkok International Airport in Thailand and Charles De Gaulle airport in Paris, France. So:

It's easy to see that it is possible to travel to each continent in one day. In fact, if you look at the total airtime (23 hours and 40 minutes), you'll discover that, were it possible to land and take off with about a 3- or 4-minute turn-around, you would even make it in under the 24-hour time period, too. But, landings and take-offs do take more time than 3 or 4 minutes!

Using the time zones and the top speed transportation of the Concorde it almost seems too easy. With this scenario, you've even got time for a quick venture out the plane for a photo or two. But what if you could only use a 747?

From this, you can see that it's just not possible to make a trip of this kind in one day on a 747.