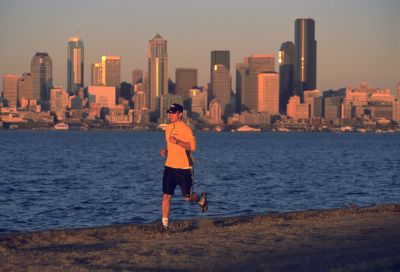 It's not hard to find serenity in Seattle. Despite the frenetic, caffeine-inspired pace of downtown and Interstate 5, all you really have to do to get away is hop aboard a ferry or grab a patio table at one of the many seafood restaurants on Puget Sound.

You can take a short drive into the mountains, explore the wineries of suburban Woodinville, or disappear into one of the city's beautiful parks and gardens, such as the Washington Park Arboretum. These are all things that Seattleites themselves do to unwind, and visitors are well advised to follow their lead.

When you're feeling stressed, there's nothing quite like a ferry trip to Bainbridge Island, to Bremerton, or better yet, to bucolic Vashon Island. The boat trip from Pier 50 on the Alaskan Way waterfront is passenger-only, which means you'll be joined by hikers and bicyclists heading out to enjoy the island's little-traveled back roads through forests and farmland, past orchards, berry patches, and craftspeople's studios.

Insider's Guide: The Best of Relaxing & Unwinding in Seattle

Seattle isn't exactly a beach town -- the waters of Elliott Bay are cold year-round, and there's no surf to speak of -- but you can capture the sandy flavor at two-mile-long Alki Beach (2700 Alki Ave SW), at the northwestern tip of the West Seattle promontory opposite downtown Seattle. A long promenade is popular among joggers, bicyclists, and inline skaters, and in the evening, the strand is a favorite place for local teenagers to gather around bonfires.

Another favorite urban getaway is the Washington Park Arboretum (2300 Arboretum Dr). Its 230 acres stretch north from East Madison Street to Union Bay, a Lake Washington inlet, and incorporates miles of trails through tall firs, blossoming azaleas, and rhododendrons (in spring), and other magnificent greenery. Don't miss the Japanese Garden (1075 Lake Washington Blvd), either, for its cherry blossoms in spring or its brilliantly turning maples in fall.

The International Fountain (305 Harrison St) is a good place to watch and sit aside its sleek, silver globe in the path of splashing arcs of water, which go off hourly and shoot up to 150 feet in the air.

The rainy climate dampens enthusiasm in some more traditional outdoor sports, including golf and tennis. Spring and summer, however, find golfers on the links. A couple of the more popular courses are the Jefferson Park Golf Club (4101 Beacon Ave S), an 18-hole par-70 public course open year-round, and Druids Glen Golf Course (29925 207th Ave), an 18-hole par-72 course with the backdrop of Mount Rainier and several holes requiring difficult shots over water right off the tee.

Diehard tennis players generally turn indoors to private clubs, but if you're an out-of-town visitor, you can call a week ahead to reserve an indoor or outdoor court at the Amy Yee Tennis Center (2000 Martin Luther King Jr. Way S; 206-684-4764).

Don't overlook the appeal of wineries or of a dinner train that can take you there. The Spirit of Washington Dinner Trail and its vintage railcars depart suburban Renton, at the south end of Lake Washington, every evening for a 22-mile run to Woodinville, not far from the north end of the lake. At Woodinville, passengers disembark for a wine tasting at the lovely Columbia winery.

Some people prefer to take a guided tour when visiting an unfamiliar city. The next page offers suggestions on some of the best of Seattle's organized tours.