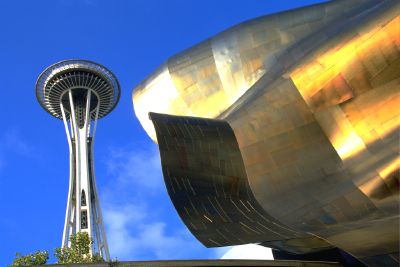 A brief history lesson can help in understanding how Seattle grew architecturally. Platted in 1853 by early settlers (and named for Chief Sealth, who lived nearby with his Suquamish tribe), the town grew slowly around an economy of lumber, coal mining, and fishing. Stripped timber was "skidded" down a steep hill from sawmill to the harbor; this avenue -- flanked by wood-frame hotels, bars, and other establishments -- became known as Skid Road. In 1889 (the same year Washington became a state) the entire 65-square-block business district was destroyed by fire.

Fueled by harbor business and the Alaska gold rushes of the late 1890s, Seattle grew rapidly. Smith Tower was indicative of that growth; its $1 million price tag was a fortune in 1914. Pike Place Market, which opened in 1907 and grew in a haphazard, labyrinthine fashion, was much less costly.

The University of Washington got its start in the same era; its original downtown location, dating from 1924, is now the venerable Fairmont Olympic Hotel (411 University St).

Ever since the 35-story Smith Tower (506 Second Ave) was completed in 1914, capped with a Gothic pyramid and acclaimed the tallest office building in the world outside of New York City, this has been a city well acquainted with unusual feats of design.

The clues are obvious: the 1962 Space Needle (400 Broad St), by John Graham and Victor Steinbrueck; the 2000 Experience Music Project (325 Fifth Ave N) by Frank Gehry; and the 2005 Seattle Central Library (1000 Fourth St) by Rem Koolhaas, are all buildings well ahead of their time.

The Space Needle looks like a flying saucer on a stick; it was the icon of 1962's Seattle World's Fair. At its foot is the Experience Music Project, a glittery bizarre-shaped structure that has been compared to a giant smashed guitar.

Many regard the angular, highly contemporary Seattle Central Library (1000 Fourth Ave) as the finest example of modern architecture in the Pacific Northwest. The angular glass-and-steel library, which opened in May 2004 and cost $169 million, holds 1.4 million books and more than 400 public computers.

And even the sports-arena designs of Safeco Field (1250 1st Ave S) and Seahawks Stadium (800 Occidental Ave S), the latter on the site of the demolished concrete Kingdome, have earned praise. Safeco Field features nostalgic architecture and a retractable roof that weighs 22 million pounds and covers nine acres. The Seahawks Stadium features an arcing roof covering 70 percent of the seats, which is great protection from the rain and also amplifies crowd noise.

If you have a serious interest in architecture, you'll want to contact the Seattle Architecture Foundation (1333 Fifth Ave, Rainier Square Atrium; 206-667-9184) and inquire about the schedule of inexpensive, two-hour guided tours.

Shopping in Seattle is as fun as viewing the city's unique architecture and landmarks. Find out about Seattle shopping in the next section.