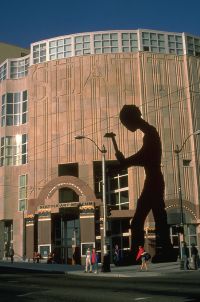 ©2006 Seattle Convention and Visitor's Bureau The Seattle Art Museum soon will be bigger and better than ever.

Glass master Dale Chihuly has put greater Seattle on the art world's map in the past two decades, but the artistic heritage goes back much further. Northwest coast tribal art is considered by many to be the supreme expression of Native American cultures. Galleries throughout the greater Seattle area, but particularly near Pioneer Square, display and sell a wide range of fine arts. For more contemporary work, check out Capitol Hill or the SoDo neighborhood south of downtown.

The Seattle Art Museum, currently closed as it undergoes an expansion targeted for completion in spring 2007, has an outstanding survey collection of international art, while more specific collections may be found at the Asian Art Museum and on the University of Washington campus at the Henry (cutting-edge arts) and Burke (ethnic arts) galleries.

For performing arts, you need look no further than across Second Avenue from the Seattle Art Museum to Benaroya Hall -- home of the Seattle Symphony, one of the nation's top recording orchestras. Numerous other events are held here and at Seattle Center, whose McCaw Hall is home to the Seattle Opera and Pacific Northwest Ballet.

Nearby, the Seattle Repertory Theater performs at the Bagley Wright Theatre. Touring Broadway shows are presented at the 5th Avenue Theatre; the Paramount Theatre is a popular concert venue.

Once the expansion of the Seattle Art Museum (100 University St) is completed in spring 2007, you'll want to use this landmark building as the launch pad for any Seattle art tour. As it triples in size, many more of its collection of 23,000 works will be on display. The art museum is closed until spring.

In the meantime, though, the Seattle Asian Art Museum (1400 E Prospect St) in Volunteer Park on Capitol Hill is the center of artistic activity.

There are other fine museums throughout the Seattle area. Many carry historical or industrial themes, including the Museum of History and Industry (2700 24th Ave E); the Museum of Flight (9404 E. Marginal Way S); Odyssey, the Maritime Discovery Center (2205 Alaskan Way); and the Nordic Heritage Museum (3014 67th St NE).

The biggest event of Seattle's art year is Bumbershoot (305 Harrison St), which completely envelops Seattle Center for three full days over Labor Day weekend. Nationally acclaimed musicians perform on eight separate music stages, and there are multiple additional venues for theater, comedy, film, visual arts, and much more. The price of three-day passes starts at $80 at the gate (less by advance purchase via the Web site).

See the next page to learn where to find the best of Seattle's architecture and landmarks.