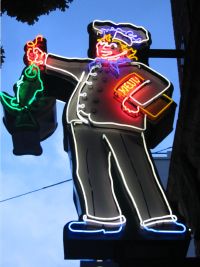 Cuisine in the Seattle area has two particular highlights: seafood and Pacific Northwest regional cuisine. Seafood reigns supreme at restaurants like Elliott's Oyster House (Pier 56, 1201 Alaskan Way) for fresh Hood Canal oysters on the half shell; the Mobil Three-Star Ray's Boathouse (6049 Seaview Ave NW), near Ballard, for roasted Alaskan halibut with a squid-ink risotto and a lemongrass-coriander sauce; and Ivar's Salmon House (401 NE Northlake Way), on Lake Union near the University of Washington, where alder-smoked, barbecued salmon is served in a replica of a traditional Indian longhouse.

Outstanding French restaurants in Seattle include Mobil Two-Star Campagne (86 Pine St), whose roasted sea bass with tarragon and lemon is unforgettable, and Mobil Four-Star Rover's (2808 E Madison St). If they're available, try the Columbia River sturgeon or the venison medallions with lentils and parsnips.

Many Seattleites insist the Mobil Two-Star Metropolitan Grill (820 Second Ave) is not only the best steakhouse in the city buts one of the best in the country. The New York peppercorn steak, topped with a green peppercorn demi-glace, is the stuff of local legend.

For great Chinese, look no further than the L.A. Seafood Restaurant (424 Seventh Ave S) in the International District. It's famous for its Cantonese-style seafood, such as pan-fried prawns with green pepper and black-bean sauce.

If you're trying to keep costs down, Pagliacci (550 Queen Anne Ave N) is a terrific place for the original cheese pizza, Canadian bacon and pineapple pizza, or spinach and chicken pizza.

In March and November, keep an eye out for Seattle's "25 for $25" promotions, which offer three set-price courses at 25 participating upscale restaurants around the urban area.

It's wise to have a reservation to avoid a long wait for a table, especially in summer and on weekends year-round. State sales tax of 8.6 percent will be added to your bill, and you should plan on tipping an additional 15 to 20 percent.

With so much to see and do in Seattle, you might want to plan ahead. The next section will help you do just that, with suggested itineraries for various areas of interest.