Getting In, Getting Around Seattle 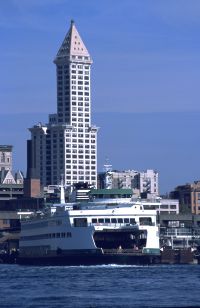 ©2006 Tim Thompson Take Washington State Ferries to get across Puget Sound to some of the islands.

Seattle's street system is pretty easy to get the hang of, but you'll want to carry a map just to play it safe. You'll also want to read the following Seattle transportation primer.

Seattle-Tacoma International Airport, or Sea-Tac, is about 20 miles south of downtown Seattle.

Rental car: Most major rental-car agencies serve the Sea-Tac airport. Counters are located in the baggage claim area, with checkout areas on the lower level of the facing parking structure.

Taxi: Several taxi companies service the Sea-Tac airport, waiting for patrons in a designated area outside baggage claims. Rates are set at $2.50 for the meter drop, $2 per mile, and 50 cents for each rider beyond two passengers. If your designation is a downtown Seattle hotel, your fare will be a flat rate of $28.

Public transportation: Information desks in the airport's baggage claim area provide full information on all transit options from the airport -- all of them conveniently located nearby.

Most shuttle services operate from 5 am to 11 pm, with return airport trips by reservation. The Shuttle Express (425-981-7000) drops off passengers at hotels and residences. Rates are $28.75 for one or two people, and $4 per each additional passenger. Gray Line's Seattle Downtown Airporter Shuttle (866-235-5247) serves the downtown hotel district only, with rates of just $10.25 for a one-way ride and $17 for roundtrip.

Rush hour: Either from the Sea-Tac airport or from neighboring cities, you'll be approaching Seattle on Interstate 5, which runs through the heart of the city from south to north. Coming from the east, chances are you'll approach via Interstate 90. The two major highways join just south of downtown.

The street network is pretty straightforward -- there really are only two other non-freeway arterials, north-south Highway 99 and east-west Highway 520. But Seattle's restrictive geography can lead to severe traffic jams, especially on Interstate 5 north and immediately south of downtown. If you exit the interstate without a street map, you're likely to get lost.

Try to avoid driving on the main roads during rush hours, which are between 7 and 9 am and again between 3 and 7 pm, or earlier on Fridays. If you must drive on Interstate 5 during these hours and want to get through the city as quickly as possible, look for the exits onto express lanes, whose traffic flow

is toward downtown in the morning, away from downtown in the evening. Bear in mind, there are few exits from the express lanes, so they aren't a good option for shorter commutes.

Rules of the road: If you aren't comfortable driving in a rainy climate, now would be a good time to learn. For starters, adjust your speed accordingly. It takes much longer to stop on wet pavement than on dry, so tailgating isn't an option. Keep this in mind, as well, when you're approaching crosswalks -- in general be aware of pedestrians and bike riders.

Public transportation/fares: Take your choice from among buses, trains, streetcars, a monorail, and the most extensive urban ferry system in the Lower 48.

Metro Transit buses are ubiquitous throughout the greater Seattle area, with free downtown service. Fares otherwise are $1.25 and $2. Metro also runs the Waterfront Streetcar trolleys between Pier 70, on the waterfront, and the International District.

Sound Transit links Seattle with neighboring Tacoma and Everett through a network of buses and trains. The Seattle Monorail is a grizzled veteran of 44 years of service along a one-mile route (9 am to 9 pm daily, $2 each way) between downtown's Westlake Center and the Space Needle.

Washington State Ferries cross Puget Sound to Bremerton, Bainbridge, and Vashon islands from Pier 50/52 (passenger fares begin at $6.50), as well as offering four other routes in the greater Seattle area.

Taxis, on foot, or by bike: Taxis are a good option if you're traveling several miles or schlepping luggage, but have your concierge call ahead for you: Cabbies here rarely respond to being hailed on the street. Rates are set at $2.50 for the meter drop, $2 per mile, and 50 cents for each rider beyond two passengers.

In fitness-oriented Seattle, despite numerous steep hills, walking and biking are real options: walking in downtown, biking in the outlying neighborhoods. Many major suburban streets have bike paths distinctly marked on the sides of the roads.

Now that you know where to go, you can begin thinking about exploring. From festivals like Seafair to an underground tour of Pioneer Square, Seattle offers a wide range of special events and attractions to its visitors. See the next section for more information.