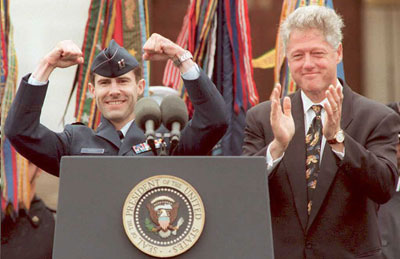 The life of each U.S. soldier is important, and combat search and rescue has become one of the most vital operations in modern warfare. In fact, CSAR units are among the first to arrive behind enemy lines after combat operations. The Department of Defense has appointed the U.S. Air Force as the lead in CSAR operations. Whenever an aircraft goes down or a soldier is isolated away from his unit, the Air Force CSAR comes in to locate, establish contact and attempt to recover him.

Other operational tasks of the CSAR units include:

Currently, the Air Force has two operational systems that use two different aircraft. The HC-130 plane is for long-range search operations in low-to-no threat scenarios. It also provides in-flight refueling for the search helicopters to extend the mission's range. The HH-60 helicopter is for search and recovery in a medium-threat environment. Each operation can perform in both day and nighttime scenarios. In the event of an emergency medical situation, the helicopters drop paramedic rescuers if the enemy threat is low enough. In order to minimize the threat, support aircraft launch air-to-air and air-to-ground missiles and gunfire to keep the enemy away.

­Authenticating the source of a distress call is the most important step in a CSAR mission. With the enemy's ability to monitor and jam radio frequencies, discreet ground-to-air signals are vital to the successful extraction of a soldier in need. After communication is established, the CSAR unit needs to get information on the physical well-being of the soldier first. After that, the authentication process is initiated. This typically entails relaying the soldier's name and rank, as well as unit numbers, colors and letters. Isolated personnel won't receive assistance until authentication is complete. Authentication details are never given in full over the radio as they can be stolen by the enemy. The CSAR team will ask the soldier to add, subtract or multiply specific digits in the authentication code and relay that information back. This allows the soldier to reuse the codes later without being compromised.

In the next section, we'll examine some of the techniques used by civilian SAR teams in missing persons searches.

U.S. Air Force Captain Scott O'Grady became famous when he survived behind Bosnian enemy lines after his F-16 was shot down in 1995. The incident occurred at 27,000 feet, exploding his jet fighter and forcing him to eject, on fire, and parachute into the unfriendly region below.

He survived on bugs, but his primary concern was dehydration. With only a couple of packages of survival water, he collected rainwater and ultimately drank the sweat from his own socks. O'Grady avoided capture by the Serbs for six full days, while trying to establish contact with the airborne command center for rescue.

Once the CSAR team received the signal, they had a decision to make -- their preference was for a nighttime rescue to take advantage of night-vision capabilities and make the mission safer. But the signal was received just before dawn, and they didn't think­ waiting another day was an option. So two hours after they received the signal, in broad daylight, a Marine unit hit the ground and extracted O'Grady in just over two minutes [source: FIU].

O'Grady wrote about his survival and rescue in the book "Return with Honor."