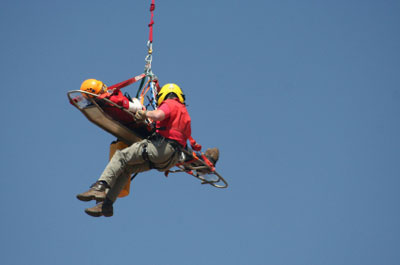 A survivor is lifted from the sea in a rescue litter.
© iStockphoto/Destonian

The Coast Guard, Navy and Air Force carry out search-and-rescue missions in U.S. waters. This applies to individuals lost at sea as well as downed airmen. The Coast Guard reports that 95 percent of all sea rescue missions occur less than 20 miles from the shoreline. Additionally, 90 percent of these incidents involve only rescue, without a search. This is largely due to distress beacons found on boats and planes, giving the Coast Guard a high probability of finding the person in distress in short time. A limited or nonexistent search is ideal because the less time they spend looking, the more people they can save. It's also less risky for the SAR teams and doesn't cost as much money. The 10 percent of missions that involve a search cost the Coast Guard more than $50 million each year [source: U.S. Coast Guard].

The mission of any Air/Sea Rescue (ASR) team is simple: get people out of the water before they succumb to the unforgiving sea. Helicopters fly in to drop rescue swimmers into the ocean from heights up to 60 feet, sometimes into 10-20 foot waves and shark-infested waters. The downed airman is often tangled in parachute lines or still attached to his ejection seat, struggling to stay afloat. While getting pelted with 100-knot wind from the helicopter's rotors, it's the job of the rescue swimmer not only to save the live of the survivor, but keep from being pulled under himself.

Navy and Coast Guard rescue swim training is among the most difficult in the military -- the school has a 50 percent dropout rate [source: military.com]. Potential SAR swimmers must come from the aviation side of the military and go through training specific to the helicopter they're assigned to. In addition to physical endurance training and a medical training course, students learn:

In the next section, we'll look at the important role that combat SAR plays in modern warfare.

Emergency locator transmittors (ELTs) have been used on boats and airplanes for decades. When activated, these distress beacons send a signal to an orbiting satellite that's able to pinpoint their location. They can be manually activated by the pilot or captain, or automatically activated when they hit water or go above a certain G-force.

­Older models operate at a 121.5-megahertz frequency and emit false signals 98 percent of the time. For this reason, starting Feb. 1, 2009, the FAA and National Oceanic and Atmospheric Administration (NOAA) will no longer monitor this frequency for rescue. After this date, aircraft and boats with these older beacons will have to count on planes flying directly overhead to pick up their calls for help.

Newer 406-megahertz beacons are the preferred standard, even though only 10 percent of the 200,000 planes in the United States have them. Most of these beacons are on commercial airliners. At $4,000, it's an expensive switch -- but one that the FAA urges private pilots to make.

When aviation adventurer Stev­e Fossett's single engine airplane went down over the Nevada desert in September 2007, his older 121.5-megahertz beacon was activated. His plane was never found, after a month of searching. Civil Air Patrol flyers found eight other previously undiscovered crash sites in the mountains, some as old as 30 years [source: The New York Times].