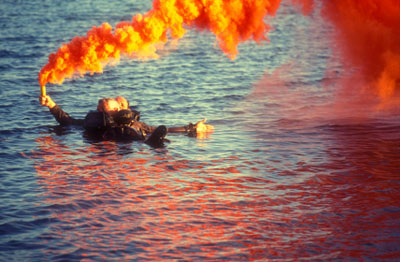 The National SAR School for the U.S. Military is located at the Coast Guard Training Center in Yorktown, Va. Jointly operated by the U.S. Air Force and U.S. Coas­t Guard, its motto says it all: "Always Ready, That Others May Live." The school started with a scant $15,000 and only six trained instructors, but it celebrated its 40th anniversary in October 2006, having trained more than 29,000 people from 148 different countries in maritime and inland SAR procedures [source: Coast Guard­].

Students at the school are trained by experienced SAR specialists, many of whom are alumni. They can accommodate up to three simultaneous classes of students learning planning techniques and practicing real-life SAR scenarios. The main program objectives of the school are to:

The SAR school's program goals include a realistic benchmark of saving 93 percent of people in danger and 85 percent of property at risk. Coast Guard SAR teams are expected to be ready for action within 30 minutes of notification by the National Distress and Response System (NRDS), with a two-hour total response time from the time they're notified to their arrival on the scene [source: Training Center Yorktown].

The test for a SAR team's performance is the Naval Air Training and Operating Procedures evaluation (NATOPS). After a thorough examination of record keeping and paperwork maintained by the teams, SAR team members take a detailed written test that covers everything from equipment operations to virtually every SAR technique. One example question might be: "What pitch and roll limits should be maintained during emergency lubrication system operations?"

Next up is the grueling physical test. After a round of 25 pull-ups, SAR team members run a timed 100-yard obstacle course while carrying two 50-pound dumbbells. Then they're timed while they march one mile carrying a 40-pound rescue litter -- the caged metal stretcher used in air and sea rescues. Team members then get in their rescue harness, swim fins and snorkel for a one-third of a mile solo swim, followed by another third pulling along a volunteer "victim" -- to be completed in 27 minutes.

The inland training features rock climbing, rappelling and rescuing 180-pound dummies entangled in trees 60 feet off the ground. There are also combination scenarios -- a helicopter crew has ejected leaving two men in the water, one in the trees and one stranded cliffside. Rescuers are rated on their planning and execution as well as how they work as a team.

Civilian SAR training isn't standardized, and there are dozens of private SAR schools open for business. Sheriff departments might send deputies to a private SAR school, but most participants are average citizens who have a desire to help those in need. They often spend their own money on training and equipment.

In the next section, we'll look at how important urban search and rescue is in helping victims of natural and man-made disasters.

More and more often, mountainous regions are making use of horses in their SAR missions. Horses can provide transport of foot searchers to locations not accessible by automobiles -- like the side of a mountain. The horses can assist in extraction of injured and dead or haul supplies on long SAR operations. They can also help establish radio relay positions over long distances by setting up in between search points. A forensics expert who rarely leaves the lab might benefit from riding to the search location rather than attempting to hike [source: Downs].