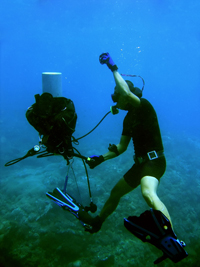 Equipment failure can be worked around if you know what to do.
Donsimon/Dreamstime.com

Diving equipment failure, yikes! While we all agree this would be a frightening experience, it's usually not as dire as it sounds. When you hear about a diving incident, it most often involves a malfunctioning regulator or a tank low on air. There are two things you need to worry about if your equipment fails:

Typical recreational SCUBA divers breathe either compressed air (78 percent nitrogen, 21 percent oxygen) or an oxygen-enriched, nitrogen-oxygen combination called Nitrox (64 to 68 percent nitrogen, 32 to 36 percent oxygen). The gas is contained in a cylinder that you carry on your back. You can't breathe directly out of the tank because the high pressure would damage your lungs. Therefore, the cylinder is fitted with a regulator. The regulator does two things: It reduces the pressure from the tank to a safe level for you to inhale, and it supplies air on demand.

To accomplish these tasks, regulators have two stages:

So what would happen if your regulator were to malfunction or your tank ran out of air? Obviously, when the air stops, your first instinct will be to head straight for the surface. But before you do, there are two things to keep in mind.

As you ascend back to the surface, the air in your lungs will expand. In order to keep your lungs from expanding too quickly or too much, you need to exhale as you float to the surface. Think about a balloon. Say you take a blown-up balloon with you as you dive 30 feet below the ocean's surface. The balloon will deflate to about half its capacity by the time you reach your destination because of the pressure of all that water pushing down on it. As you go ­back to the surface, it will expand. Now let's say you took an empty balloon down 30 feet and somehow inflated it to normal size down there. Then you brought it back to the surface with you. What happens? It expands beyond its capacity and bursts. The same thing would happen to your lungs if you don't exhale constantly. If you exhale and rise no faster than the bubbles do, you should be OK.