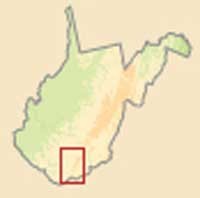 Experience life in the coal camps on the Coal Heritage Trail in West Virginia. As you wind through the mountains and valleys of the byway, you will see many physical remnants of the coal boom that furthered the industrialization of America.

Cultural: Experience the culture of the coalfields that developed from different racial and ethnic groups working and living together. As coal became a primary resource for fuel after the Civil War, southern West Virginia and its coalfields grew quickly. Immigrants from Europe and from the southern states of the nation gathered along the Coal Heritage Trail. Although the byway is a representation of cultural harmony, distinctive ethnic communities, old-world traditions, and festivals are kept alive to enjoy today. Physical elements such as onion-domed Orthodox churches are available for enjoyment, while shops and stores exist that preserve the heritage of the past.

Historical: The story of southern West Virginia's coalfields is one of working-class culture, industrial might, and racial and ethnic diversity. The coal mines along the Coal Heritage Trail produced abundant economical fuel that transformed rural America into an industrial land, providing jobs and homes for thousands of people fleeing persecution and oppression. Immense fortunes were made by those who invested in the industry, and a society was produced with a peculiar and fascinating legacy.

What makes the Coal Heritage Trail significant are the physical remnants of the coal boom that remain scattered in the deep valleys of the region. These artifacts provide a wonderful opportunity for understanding the role of the West Virginia coalfields in the industrialization of America.

As mining jobs were lost to mechanization, the people of the coalfields left in search of employment in the cities of the industrial Midwest and beyond. The descendants of these people and other visitors interested in the many facets of heritage and culture represented on the byway are visiting the area. Visitors will see historic structures, including coal mines and railroad structures. Visitors will also experience coal camp life by seeing coal miner houses, company stores, company offices, and similar structures that defined coal camp life.

Natural: Amid the Appalachian Mountains, the Coal Heritage Trail makes its way through the Ohio Valley. Before its industrial days, the area along this byway was rugged and undeveloped. With the industrial revolution, a new natural resource was discovered in the Trans-Allegheny Frontier. Deposits of some of the world's best bituminous coal were found throughout southern West Virginia. This type of coal is low in sulfur and high in BTU volatility, and this produces "smokeless coals."

Recreational: Visitors to the Coal Heritage Trail enjoy outstanding recreational and natural features. The rugged and beautiful mountains of the coalfields are the physical signature of the region and were instrumental in the development of isolated coal camps that were connected to the outside world only by the railroad that also hauled out coal. Numerous state parks and wilderness areas provide access to recreational areas offering hiking, skiing, canoeing, mountain biking, white-water rafting, and other activities.

Scenic: The Coal Heritage Trail is an industrial byway that tells its story through the physical artifacts and cultural traditions that remain. The byway is linked together by the mines, towns, coal camps, and industrial artifacts that are hidden and then revealed by the extreme topography of the landscape.

Wind through mountains and valleys showcasing America's remarkable industrial heritage on Virginia's Coal Heritage Trail. Learn where you can step into a coal miner's home and a company store, view a railroad yard, and brave a visit deep inside a former coal mine. 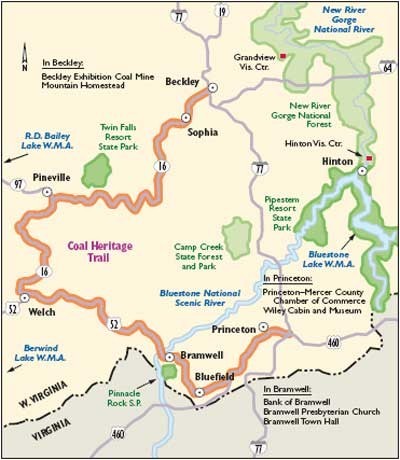 Not only rich in scenery, this area is rich in heritage, a place where coal reigned supreme. This itinerary gives you a few of the must-see highlights along the way.

Bluefield: From Princeton take U.S. 460 to Bluefield to begin traveling along the Coal Heritage Trail. On Commerce Street is the Eastern Regional Coal Archives and Museum. The facility collects, preserves, and makes available coal-related heritage through photographs, memorabilia, and other artifacts. Also in town is the Bluefield Area Arts Center on Bland Street in the Old City Hall. It is home to an art gallery, the Summit Theatre, a restaurant, and the Mercer County Convention and Visitors Bureau.

Bramwell: The historic village of Bramwell was once the wealthiest town per capita in America, home to 14 millionaires who made their fortunes here. A brochure with a walking tour and map of the historic highlights of the luxurious heydays of Bramwell is available at the Bramwell Town Hall and at several of the bed-and-breakfasts that are the former homes of the wealthy coal barons.

Bank of Bramwell: The Bank of Bramwell was once so prosperous that the janitor would take heaping mounds of moneybags in a wheelbarrow to the train station each day. Bust by 1933 as a result of the Great Depression, the historic bank building, still oozing with opulence and elegance, was home to the local paper by the turn of the 20th century.

Welch: Though a tiny village now, the town of Welch is noted for its four-story granite courthouse and the History in Our Mountains Museum. At the museum visitors can begin with a 25-minute film about the coal industry. A self-guided tour takes guests on a journey through history.

Beckley: The city of Beckley awaits visitors at the northern end of the Coal Heritage Trail. In the New River Park in Beckley are two definite must-sees for those eager to experience the coal heritage of the region.

Mountain Homestead: The Mountain Homestead is located directly behind the Youth Museum at New River Park and has re-created a typical settlement on the Appalachian frontier. Trained interpreters enhance the visit to each reconstructed historical building, including the two-story log house, weaver's shed, one-room schoolhouse, barn, blacksmith shop, and general store.

Beckley Exhibition Coal Mine: This mine gives visitors a realistic glimpse into the world of coal mining as it was in the early 1900s. Tours travel underground through nearly 1,500 feet of passageways in an authentic coal mine 500 feet below the New River Park. Guides are veteran miners and provide vivid details of life in the mines. Visitors can also browse in the coal mining museum.

The region commemorates the history and culture of the coal industry and the impact it had on the physical and social environment. This winding mountain drive brings that story to life.