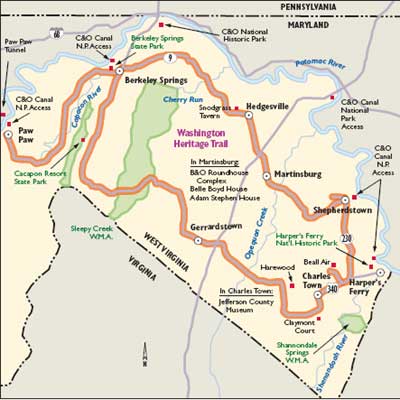 View Enlarged Image This map will take you to countless historical sites in West Virginia. The Washginton Heritage Trail also leads to many opportunities for outdoor recreation.

Follow the footsteps of America's first president and founding father when you travel West Virginia's Washington Heritage Trail. So much of George Washington's history is preserved and relived along the byway that you can almost feel his presence. The byway offers a retreat from the hustle and bustle of metropolitan life. Travel through farms and apple orchards and enjoy the scenic beauty of the area as you explore the history of the people and places that shaped this great nation.

The eastern panhandle of West Virginia is rich in culture and history, although the figure of George Washington looms large over the region.

From archaeological mounds to old cemeteries and towns, the Washington Heritage Trail offers pieces of the past for interested travelers. Visitors will find Green Hill Cemetery as a museum of stone-carver's art. In the same area on the byway, visitors can go to one of the earliest known African-American cemeteries, as well as a Dutch cemetery from the mid-1700s.

Prehistoric archaeological sites dating from as early as 12,000 B.C. can be found in the Heritage Trail area. One prehistoric site that travelers find interesting is the earthen mound at Woods Resort. Artifacts recovered from the mound suggest that it was built between 800 B.C and 300 B.C.

Cultural qualities along the Washington Heritage Trail reflect the rich history and diverse culture of West Virginia's heritage, which blends Virginia gentility with mountain hospitality and charm. The panhandle's pioneers are recognized by annual events. Berkeley Springs honors the nation's first president each March with the George Washington's Bathtub Celebration.

Far from being confined to history, celebrations along the byway focus on other facets of the eastern panhandle's unique cultural legacy, such as arts and crafts, apples, and drinking water.

Beginning in the days of George Washington, the eastern panhandle of West Virginia has been a pocket of history. It has seen troops of three wars, the growth of a population, the industrialization of a society, and the developments that have allowed the area to achieve national recognition. For example, the eastern panhandle was an important source of quality enlisted officers during the Revolutionary War.

Many of the region's settlements were established during the late 18th century, including Shepherdstown and Martinsburg. Much of the panhandle's early activity occurred around these settlements, and historic structures line the roads of the Washington Heritage Trail.

By urging the establishment of a federal armory at Harper's Ferry, George Washington inadvertently played a role in the tensions that sparked the Civil War. The armory was seized by abolitionist John Brown during his famed 1859 raid, an event that focused the nation's attention on the issue of slavery. The Potomac Valley was the stage for a number of critical Civil War campaigns, one of which culminated in the battle at Antietam, the bloodiest of all Civil War battles.

Also, George Washington's interest in making the Potomac River navigable sowed the seed for what became the Chesapeake and Ohio Canal, which was critical to the movement of goods and people through the Potomac Valley for more than 70 years.

Confederate forces traveled portions of the Washington Heritage Trail in Morgan County during Thomas Jonathan "Stonewall" Jackson's 1861-1862 winter campaign. In Morgan County, nearly 16,000 Union forces camped at Camp Hill Cemetery east of Paw Paw -- the same location used by General Edward Braddock's forces during the French and Indian War. Panhandle railroads like the Baltimore and Ohio were strategically important during the war as well, and Martinsburg's B&O Roundhouse Complex National Register of Historic Places District preserves some of the resources that were targeted by Confederate raiders.

The bountiful natural qualities of the Washington Heritage Trail spring from the unique geomorphology that shaped West Virginia's eastern panhandle. Indeed, the earth's moving crust created the dominant landscape features that are experienced along the byway, including the ridges, valleys, and mineral springs of the eastern Appalachian Mountains.

Recreational activities are abundant on the Washington Heritage Trail. Sight-seeing is one of the most popular activities. In addition to visiting historical sights and passing scenic overlooks, fishing, hunting, boating, golf, and racing are all activities that are offered.

Resources for walkers and hikers abound in the eastern panhandle, including everything from historic walking tours of Shepherdstown and Charles Town to many wonderful hiking trails. Shorter hiking trails can be found in the Cacapon Resort State Park and at the Coolfont Resort, and longer hikes exist along the Tuscarora Trail that runs the length of Sleepy Creek Mountain. The 2,100-mile-long Appalachian Trail has its headquarters in Harper's Ferry and can be accessed there. Another great hiking trail, the C&O Canal Trail, is probably the least strenuous and one of the most scenic trails. It can be accessed at Harper's Ferry and Paw Paw.

The network of mountain streams and rivers in the panhandle provides ample opportunities for both fishers and boaters to enjoy the water. River rafting, canoeing, and kayaking trips on the Shenandoah and Potomac Rivers can be arranged through outfitters in Harper's Ferry.

Not surprisingly, the Sleepy Creek Public Hunting and Fishing Area remains the largest public area open to hunters. Golfers can enjoy a round or two at public and private courses such as those at the Woods Resort, Locust Hill, and Cacapon Resort State Park. Fans of thoroughbred racing can try their luck on a trifecta wager at the Charles Town Race Track. Auto racing enthusiasts can also get their fill at the Summit Point Raceway.

States it runs through: West Virginia

Considerations: This byway is long (136 miles) and has a host of historical sights to see. Visitors may want to consider spending an extra day or two in order to experience all that the Washington Heritage Trail has to offer.