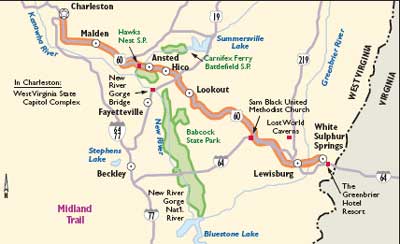 Travel West Virginia's Midland Trail and enter a land of world-class white-water rafting, Civil War remnants, African-American history, and small towns full of country charm. The byway will carry you through areas rich in industrial culture, over hills and through valleys arrayed in scenic beauty, and finally out into rolling farmland settled during the colonial era.

From the soaring cliffs of the New River Gorge to the depths of the Lost World Caverns, the Midland Trail offers a wide range of attractions unique to West Virginia.

Cultural Qualities of the Midland Trail

Part of the cultural heritage of today comes from the history of yesterday. The Midland Trail holds many historical sites significant to the life of Booker T. Washington who played an influential role in African-American education and equality. He is memorialized today at historic buildings and information centers on the byway. People remember the first developments of industry along the byway when Elisha Brooks used 24 kettles to extract salt from the area's brine in 1797.

Although West Virginians have found a significant role in the industry of natural resources, an appreciation for the arts and outdoors has also been cultivated here. Nothing is more revered in today's West Virginia culture than outdoor recreation and adventure. White-water rafting is second to none. The skill and craft of byway residents can be found in the many stores along the way. Quilts are a specialty, and visitors will be able to find quilt shops in Malden, Lookout, Ansted, and several other byway communities. Cabin Creek Quilts in Malden has made quilts for such figures as U.S. Presidents, Jackie Kennedy, and Barbra Streisand.

Historical Qualities of the Midland Trail

There are many historical events associated with the Midland Trail. As the new country struggled to move westward over the Appalachian Mountains, the Midland Trail was the most direct but most difficult passage from the mid-eastern colonies. Following buffalo and Native American trails, Daniel Boone explored the route.

Eventually a combination of land and water routes opened up the land and the natural resources to the nation. Buffalo, American Indians, settlers, and later industrialists sought out the rich salt brines of the Kanawha Valley. The river provided transportation for coal and timber. The battles fought over this route started before the Revolutionary War and continued through the Civil War.

Claudius Crozet was responsible for planning Virginia's road system. He designed and constructed many roads, including the Midland Trail.

These roads became very important during the Civil War. The state provided many troops for battle, and the Midland Trail itself was used as a warpath.

For a time, the Midland Trail was nearly forgotten as people used the railways. Meanwhile, the 20th century began, and the area's resources fueled the industrial development. The slaves who toiled in the salt works and the immigrants who cut the Hawks Nest Hydroelectric Tunnel through silica rock left behind a history of the nation's growing pains.

In the mid-20th century America's love affair with the automobile was heightening, and the trail became U.S. 60, the preferred truck route over the mountains. Today, its roadside parks, turnouts, and mom-and-pop businesses still resemble the traveling conditions present after World War II. Yet the road leads to a place of change and history in Charleston, the state's capital.

Recreational Qualities of the Midland Trail

World-class whitewater rafting and outdoor sports are found along the Midland Trail. The best white water east of the Mississippi annually draws more than 160,000 people to raft the New River, and more than 60,000 people raft the Gauley River during its 22-day fall season.

Outdoor adventurers also participate in kayaking, canoeing, fishing, hunting, rock climbing, hiking, and mountain biking. One of the most adrenalizing activities happens once a year on the third Saturday in October. For a thrilling spectacle, watch trained jumpers as they leap from the 876-foot-high New River Gorge Bridge.

Local communities also offer recreational activities. Ansted has an annual street luge competition. The Greenbrier Hotel Resort, a National Historic Landmark, has 54 holes of championship golf, including the golf course called Oakhurst Links. At the 1884 course, golfers must still use 19th-century wooden clubs and equipment, and play by 19th-century rules.

Time to allow: Two to

States it runs through: West Virginia

Considerations: High season occurs from April to October when an abundance of outdoor extreme sports are available. There are a number of quality pull-offs that give visitors the opportunity to enjoy the scenic qualities of the Midland Trail to the fullest extent. There are no planned seasonal closings.

Highlights of the Midland Trail 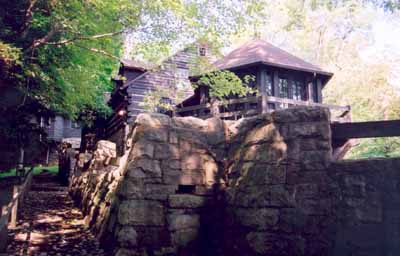 This Civil War Museum is just one of the fascinating historical sites you'll encounter as you travel West Virginia's Midland Trail.

West Virginia's Midland Trail is a scenic drive through the rolling farms of Greenbrier County and the mountains of Fayette County. Numerous pull-offs and scenic overlooks provide spectacular vistas in all seasons, from the dogwood-jeweled forests of the spring to the multicolored foliage of the fall. The scenic beauty of waterfalls and the New River Gorge are classic Appalachia.

At the Kanawha County end of the trail, the road follows the river. Here the industrial heritage is visible in many places. At the trail's start, the state capitol and the area around it provide a parklike setting. Its gold dome shining with the fire of the sunset is a picture worth seeing.

Before the interstate system crisscrossed the country, the Midland Trail was a major thoroughfare in West Virginia. Here are some of the highlights.

: Begin your journey at Charleston, the capital of West Virginia. The town is filled to the brim with historic landmarks.

West Virginia State Capitol Complex: The complex includes the capitol with its marble rotunda containing a splendid two-ton chandelier. The complex also has several statues and fountains, a veterans' memorial, a museum, the Governor's Mansion, and the antebellum Holly Grove home.

: Continuing east on U.S. 60 visitors come to the town of Ansted. Attractions include the gravesite of Julia Neale Jackson, mother of Thomas "Stonewall" Jackson; Halfway House, a former tavern on the Kanawha Turnpike and headquarters of the Chicago Dragoons during the Civil War; and African-American Heritage Family Tree Museum.

Sam Black United Methodist Church: Farther east near the junction with I-64 is this church, built in 1901. Reverend Sam Black was a Methodist circuit rider for nearly 50 years.

: The historic town of Lewisburg has enough attractions, including a 235-acre historic downtown district, to keep visitors busy for several days.

Guided tours of the elegant interior design and architecture are offered year round; the Presidents Museum details the memorable moments from the visits of 26 U.S. Presidents; tours give a glimpse into the history as well as the natural beauty that surrounds the resort.

The Midland Trail runs through the heart of West Virginia, passing through towns and countryside reminiscent of a bygone day.