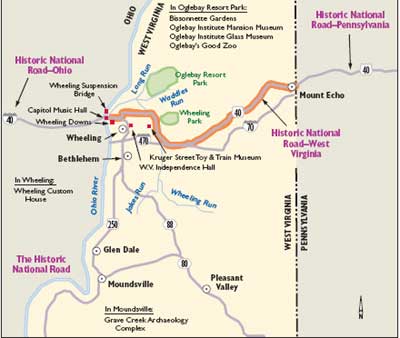 View Enlarged Image The West Virginia portion of the Historic National Road, shown on this map, will take you through a variety of significant sites related to musical, state, and national history.

West Virginia's Historic National Road takes you on a trip through history. In 1863, West Virginia developed into a new state. The building where the Restored Government of Virginia was established is located along the byway; many important decisions and debates regarding the Civil War took place in this building. You can tour this historic site that has been painstakingly preserved and beautifully restored.

The Historic National Road boasts many impressive museums and art galleries. One of the most popular museums along the byway is the Kruger Street Toy and Train Museum in Wheeling. The byway also features restored mansions, such as the Oglebay Institute Mansion Museum. This 16-mile attraction offers a high level of historic aesthetics and cleanliness. To make this route even more accommodating, you can find bike paths and paved trails through most of the byway's highlights.

Come take a ride through the northern panhandle, and discover the remarkable heritage to be found in this narrow section of West Virginia.

The cultural qualities of the Historic National Road are many in number and offer diverse experiences. Two of perhaps the most meaningful include music (particularly Jamboree U.S.A.) and religion.

The Capitol Music Hall, located next to the famous Wheeling Suspension Bridge, is home to both Jamboree U.S.A. and the Wheeling Symphony Orchestra. The Jamboree is the second-longest-running live radio program in America's history. Since 1933, famous artists from all over the nation have their show aired live over the radio each Saturday night. It was founded with the idea of promoting the regional country music that is dear to the South. When the Jamboree first began, fans drove hundreds of miles for this weekly event. This tradition continues today, as many still drive great distances to participate in the yeehawin' fun.

Religion has played a powerful role in shaping the communities along the byway. Places of worship dot this area, some with beautiful aesthetics and architecture. Churches along the route tell the story of the great diversity of those who traveled and settled here. You can view beautiful cemeteries near the churches with many monuments and headstones indicative of the artistry of earlier eras.

Without question, the historic qualities are the richest attribute this byway has to offer. With two national historic landmarks, numerous designated historic districts, and National Register structures, the Historic National Road had a great impact on not only West Virginia's past, but on America's, too.

In 1888, farms outside the city began to be developed as "suburbia." The Woodsdale–Edgewood Neighborhood Historic District is a result of this type of development. The district contains many high-style houses, such as Queen Anne, Colonial Revival, and Shingle styles. As the route descends Wheeling Hill into the city of Wheeling, you enter the North Wheeling Historic District. Ebenezer Zane, the founder of Wheeling, laid out the Victorian district in 1792. The houses include a variety of simple Federal townhouses offset with the high styles of Italianate, Queen Anne, Second Empire, and Classical Revival architecture.

The city of Wheeling has some of the world's fastest canines in the races. This popular event is usually open every day.

Visitors go to Wheeling Downs to watch the races in person. These sleek thoroughbreds give quite a show as they thunder along at speeds of up to 40 miles per hour. At Wheeling Downs, people can enjoy the luxury of attending the races while eating at a fine diner overlooking the track.

Time to allow: Less than

Cities it runs through: Wheeling

Considerations: The byway is open all year, but many feel it is best to drive during the summer, the high season, when more cultural activities are taking place.

Highlights of the Historic National Road

A scenic drive along Historic National Road in West Virginia will deliver you from your worries. Time almost stands still while looking down on the city of Wheeling from Mount Wood Overlook. With careful observation, you can spot old, restored Victorian homes, as well as other important buildings in the nation's history.

This vantage point, resting on top of Wheeling Hill, also overlooks the mighty Ohio River. It's at these heights that the observer starts to appreciate the accomplishment of early Americans who constructed the single-span Wheeling Suspension Bridge across this wide river.

As you continue to gaze in the area around Wheeling, more sights become visible. Ancient deciduous forests surround the city and small streams make their way to the grand Ohio River. Maple trees thrive here, and some of the locals harvest the syrup.

Look to these points of interest for a great tour of West Virginia's Historic National Road.

Oglebay Institute Mansion Museum: Built in 1846 as an eight-room farmhouse, the Greek Revival-style home later was expanded to become a private summer estate. Willed to the city of Wheeling, in 1930 it became a museum, and it displays period antiques.

Oglebay Institute Glass Museum: Adjacent to the mansion, the Glass Museum features 3,000 examples of Wheeling glass made from 1829 to 1939. Displays include cut lead crystal, Victorian art glass, carnival glass, and other Ohio Valley glass designs. Of note is the 225-pound Sweeney Punch Bowl, the largest piece of cut lead crystal ever made. It is regarded as a masterpiece of Victorian glass.

Wheeling Custom House: Completed at the beginning of the Civil War, the stately Wheeling Custom House has been dubbed "the birthplace of West Virginia." Meeting here in 1861, delegates from Virginia's western counties voted to nullify the state's secession from the Union while creating what became the separate state of West Virginia. It was admitted to the Union in 1863. A video provides details, and a museum displays period artifacts and gives more background on the statehood process.

Grave Creek Archaeology Complex: The Adena, a mound-building people who lived in the region from 1000 b.c. to a.d. 700, are represented by the 2,000-year-old Grave Creek Mound. It is the largest of the Adena burial mounds. In the adjacent Delf Norona Museum, exhibits detail the life of the Adena people. The mound was built by hauling 60,000 tons of dirt in basket loads.

The Historic National Road offers a glimpse into a crucial moment in American history, as well as a glimpse of the beautiful landscaping to be found in this slender stretch of land.