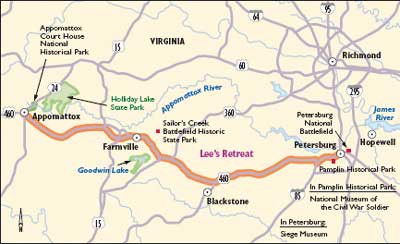 View Enlarged Image This map of Lee's Retreat will take you through the middle of Virginia along a historic Civil War route.

In the waning days of the Civil War, Union and Confederate armies raced across the Virginia countryside to the village of Appomattox, where Robert E. Lee ultimately surrendered to Ulysses S. Grant.

Civil War armies traveled mostly by foot, horse, and wagon. Today, motorists with an interest in American history can follow their path in a series of drives recalling the major campaigns in Virginia. You follow the course of action, often on the same roads used by the combatants. Directional signs guide you, and waysides along the route explain what happened. At each stop, you can tune your car radio (AM 1620) to hear more details.

The most poignant of the Civil War drives (because it culminated in the war's end), and the most scenic is Lee's Retreat, a 110-mile driving tour that follows the day-to-day, and sometimes hour-to-hour, progress of the armies west from Petersburg to Appomattox.

Perched atop a broad, grass-covered hill, the village where the two armies converged has been preserved as a national historical park. Surrounded by acres of rolling green farmland and pastures, it looks much as it did on the day of Lee's surrender, April 9, 1865.

Essentially a history lesson, the drive provides plenty of opportunities for fun-filled recess. At Farmville, where Lee hoped to find food for his hungry troops, you can lunch in an outdoor café alongside the racing Appomattox River. Just outside Appomattox, little Holliday Lake State Park tempts with a fine sandy swimming beach.

States it runs through: Virginia

Considerations: A brochure detailing the route of Lee's Retreat is available at Virginia tourism information offices and at the Petersburg Battlefield visitor center. The route can be driven year-round, although snow-covered roads are an occasional possibility from December into March.

General Lee had advisors and surveyors to help him choose his path. You can use the following itinerary as you travel the road to Appomattox, otherwise known as Lee's Retreat.

Siege Museum: The civilian story of the Petersburg siege -- the lives of the 18,000 people who endured both hunger and cannon bombardment -- is told at the Siege Museum. During the Christmas of 1864, exhibits relate, the townsfolk kept up their spirits by staging "starvation balls." Festive music was played, but there was not food on the plates.

Petersburg National Battlefield: Site of the nearly ten-month siege, the park's most notable sight is the Crater, symbol both of Union ingenuity and bungled opportunities. Early in the siege, military mining experts devised a plan to dig a nearly 500-foot tunnel under a Confederate fort to blow it up. The blast succeeded, digging a huge hole and leveling 500 yards of Confederate lines. But the Union attack force, stunned by the violent spectacle, delayed its advance, giving defenders a chance to rally.

Pamplin Historical Park and the National Museum of the Civil War Soldier: Seven galleries re-create the life of the common soldier in camp, on the march, and in battle. The museum is located on the site of a Union attack that breached Lee's defenses shortly before his flight to Appomattox. A one-mile trail explores the battlefield.

Farmville: A central Virginia commercial hub, Farmville boasts an attractive downtown center, where visitors can browse for antiques and enjoy a lunch alongside the Appomattox River. Lee hoped to feed his army here, but the federal cavalry intruded. Just to the south, Twin Lakes State Park operates a swimming beach on Goodwin Lake.

Appomattox Court House National Historical Park: Other Civil War parks commemorate the violent clash of armies. Appomattox is a place of peace, a beautiful and quiet memorial to the end of four long years of war. As such, it honors the remarkable dignity and the generosity of the combatants in the final hours of the conflict.

Holliday Lake State Park: Ringed by public forest, the park is a recreational antidote to the somber story told on Lee's Retreat. Swimming, fishing, canoeing, rowboats, and paddleboats can be found here.

The path of Lee's Retreat passes through lush farm country that has changed little since the end of the Civil War. However, the final days of that war still loom large over this serene trail.