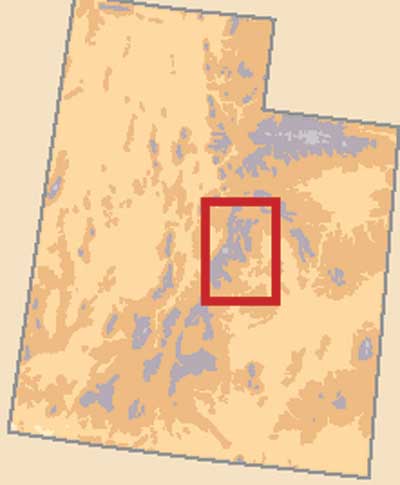 Travelers come from miles away to fish the trout-filled waters along the route or to enjoy a picnic in the beautiful forest surroundings. You can also see signs of red rock country.

Deriving its name from the rich coal-mining history of the

Along the way, you can see early Mormon settlements in Sanpete Valley or visit unique museums in the byway communities. Towns from Scofield to Huntingtonrevere the days when coal mining was the livelihood of so many of their ancestors. As you pass today's mines, note the harmony between the environment and industrial development.

The Energy Loop and the surrounding areas in central Utah offer an archaeological menagerie for visitors of any knowledge level. As you pass places on the byway, informational kiosks offer stories and facts about the archaeological past of the area.

Huntington Reservoir is especially notable for its excavation of the 27-foot mammoth skeleton that was found in 1988. Other excavations in the area have yielded a short-faced bear, a giant ground sloth, a saber-toothed tiger, and a camel, all from an ice age long ago. Examples and casts of these archaeological finds can be seen in museums on and near the byway, the most significant being the College of Eastern Utah Prehistoric Museum.

While the Energy Loop is most famous for the mammoth skeleton that was found at the Huntington Reservoir, other treasures await visitors as well. Museums in the area -- such as the Fairview Museum, the Museum of the San Rafael in Castle Dale, and the College of Eastern Utah Prehistoric Museum -- feature artifacts of human inhabitants from the recent past of the pioneers to the more distant past of the Fremont Indian culture. Near the byway, you can travel through Nine Mile Canyon, a place that has more than 1,000 sites of pictographs and petroglyphs left on the rocks by an ancient people.

You will also find tributes to dinosaurs in many of the area museums. Not only have ice-age mammals been found; the area also holds an extensive dinosaur quarry. East of Huntington, the Cleveland Lloyd Dinosaur Quarry is a place where 145-million-year-old bones and fossils from the Jurassic Period are uncovered by paleontologists.

The reconstructed skeletons and exhibits in the visitor center and area museums provide a vast amount of information on these creatures of the past. From millions of years ago to just hundreds of years ago, the Energy Loop and its surrounding areas have much to offer in the way of archaeological exploration.

The cultural patchwork of the area begins with the Fremont Indians. These people moved into the area sometime between A.D. 300 and 500. Although they were a primitive people, they left behind artifacts of a culture in their rock art, baskets, and figurines.

The Fremont Indians usually lived in pit houses made of wood and mud that were entered through an opening in the roof. The weapons and tools of this culture were much different than neighboring American Indian cultures, indicating the unique existence of the Fremonts. By the time European settlers reached the area, the Fremont Indian culture had disappeared.

Settlers who came to the area in the early 1800s found an untamed wilderness with many resources. Ranchers found meadows with grass that was perfect for grazing livestock. Coal was one of the most important resources found in the area, and as a result, coal-mining towns sprang up all around.

The coal-mining culture was a society of hardworking men, women, and children who worked in and around the mines -- often at the peril of their own lives. Their story can be found in places like the Scofield Cemetery and several deserted towns. Coal mining, power plants, and hydroelectric power harnessed in the reservoirs are all still present today. These all play a direct part in the name of this byway -- the Energy Loop.

Few areas in the United States can boast of undiscovered and diverse historical resources the way the area surrounding the Energy Loop can. Travelers along the route see a variety of important historical landmarks, including Native American historical sites, Spanish exploration routes, and the early Mormon settlements that have grown into towns. You are in for a diverse historical experience not likely to be matched as you visit the historic coal-mining and railroad industries that have deep roots in the area, along with the small-town museums in the byway communities.

View Enlarged Image This map will guide you along Huntington/Eccles Canyon Scenic Byway.

The Energy Loop abounds with natural resources that make it the scenic and productive area that it is. All along the byway, you see evidence of energy -- harnessed or unharnessed -- on the Energy Loop. Places like the Skyline Mine and the Huntington Power Plant bring natural fuels to the surface, while canyons and wildflowers bring scenic nature to the surface. With these natural qualities combined, the Wasatch Plateau is a thriving habitat for both wildlife and people.

Through ancient fault lines and geological uplifts, the canyons and valleys along the byway present a unique topography and beautiful places to stop or pass. Red rocks of sandstone line the walls of Huntington Canyon, while Eccles Canyon takes drivers through forested ridges and grassy meadows. Because of the thick forests of maple, aspen, and oak, the fall is a colorful time in the canyons of the Energy Loop.

For the same reasons that this area is rich with prehistoric fossils, it is also rich with coal. The coal in this area was formed nearly 100 million years ago, when plants were covered by land or water. The plant matter was compressed by sediment and hardened into the carbon substance we call coal. Although you may not see any coal, its presence is one of the unique natural qualities of the Energy Loop.

As you drive the byway, the natural splendor that surrounds the road is impossible to ignore. Streams rush by with trout hiding just near the banks. Mature forests of aspen and pine create a lush habitat for wildlife that lives on the byway. You may catch a glimpse of a fox or a badger.

The wetlands of the Fairview Lakes are the best place on the Energy Loop to observe waterfowl or perhaps a bald eagle. The meadows, streams, and forests all combine to create the perfect habitat for creatures great and small. On the mountaintops, birds of prey circle near the clouds while chipmunks scurry through open fields. And in the spring and early summer, wildflowers dot the road and paint the ridgetops.

All along the Energy Loop, cars are stopped at the sides of the roads, but the drivers are nowhere to be seen unless you check the river. Anglers come from all around to fish for the trout that swim in the waters of Huntington Creek. Fly fishers have their pick of cutthroat, brown, and rainbow trout when fishing the streams and rivers on the byway. Fishing in the six reservoirs along the byway is a common recreational activity.

Hiking and biking are activities worth trying along the Energy Loop. The rocks and cliffs of Huntington Canyon are an enticing invitation to explorers ready to hike along such diverse terrain. Tie Fork Canyon offers a hike among trees and wildflowers of every kind. Joes Valley is a stop that offers options for anglers and hikers.

Cities it runs through: Fairview, Huntington

Considerations: Because sections of the Energy Loop climb to altitudes above 10,000 feet, dress warmly during all seasons. Certain roads may be closed in winter due to heavy snowfall.