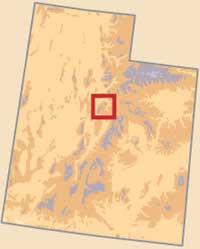 Utah's Nebo Loop Scenic Byway begins in the quiet community of Payson and ascends back and forth through a canyon of deep, fresh forest that turns to visual fire in the fall. The route continues alongside a cold, rocky creek that drops off into intermittent miniature waterfalls; fishers sit aside this creek in the cool of dusk, listening to a cricket symphony and the birds' sonata.

By degrees, the landscape changes into a high-mountain wilderness. Only fields of crisp, bright wildflowers interrupt the thick stands of aspen. Incredibly high overlooks show the Wasatch Mountains sitting loosely below you like a pile of ribbon. From these overlooks, you can also see the byway's namesake, 11,877-foot Mount Nebo.

This area is so well liked that more than one million people visit annually, and a good percentage of them reserve campsites a year in advance.

During the summer, most people like to fish at the glass-smooth lakes, such as Payson, or hike on the many trails, such as Loafer Mountain Trail.

Archaeological sites in the area show that this valley had one of the largest Native American populations in the Great Basin. In fact, if you had gone to the Nebo Loop Scenic Byway's Utah Valley Overlook in about A.D. 1500, you would have seen smoke curling up from several large villages. This byway now retains two archaeological sites.

The first, the Nephi Mounds, as a site used by the Fremont Indians around A.D. 1300.The Nephi Mounds archaeological site is agricultural in nature, as opposed to most of the mounds in the United States, which are ritualistic or artistic in nature.

As one of the primary sites for the Fremont Indian farming, Nephi Mounds was discovered by modern peoples when a farmer uncovered American Indian relics in his field.

The second is Walker Flat, a favorite camping spot of the Ute Indians, who liked to spend their summers in these mountains. Walker Flat is also where the Walker War broke out between the Utes and Mormon settlers.

The historic Peteetneet Academy displays information about Ute Chief Walker and his followers, the protagonists of the Walker War.

Settled by Mormon pioneers in 1850, the area surrounding the Nebo Loop Scenic Byway took on the culture of the farmer and the frontiersman, with pieces of the native cultures mixed in.

Although towns such as Payson and Nephi were established nearby, Mount Neboand its surrounding landscape were preserved even after a road was placed through these backwoods areas. Proud of their pioneer and native heritage and the legacy of the Nebo Loop, today's residents of Payson, Nephi, and surrounding communities fully enjoy the rivers, lakes, and forest.

The Nebo Loop Scenic Byway covers two counties, and as you continue south, the communities become smaller. The city now known as Payson was once called Peteetneet, named for Chief Peteetneet of the Ute Tribe. Peteetneet,

which means "little waters," is now the name of the academy that exhibits art and museum pieces.

Visitors stop at the Peteetneet Academy on their way to the natural wonders of the Nebo Loop. And like any communities with traditions, the byway communities host unique festivals throughout the year. Over Labor Day weekend, for example, Payson hosts the Golden Onion Days celebration.

As you drive the Nebo Loop Scenic Byway, you may want to follow the examples of the local residents and grab your tent and a fishing pole to camp your way along the Nebo Loop. Stop by some of the orchards along the way that have been a main supply of food and income for Nebo's communities for nearly two centuries. By stopping at small communities along the way, you get to see what's in store beyond Mount Nebo.

The road that became the Nebo Loop had been used for centuries by Native Americans and, later, by explorers and sawmill companies. The road was then built by the Civilian Conservation Corps (CCC) and enhanced by the addition of recreational facilities.

People have inhabited the byway and its surrounding areas for unrecorded amounts of time. The elusive Fremont Indians made their home here before the Utes, who played a part as settlers arrived in Utah. The Walker War, one of two significant wars between Utah Utes and the Mormon settlers, took place on the northern end of the Nebo Loop Scenic Byway.

Important explorers, such as Father Francisco Dominguez and Father Silvestre Velez de Escalante (1776), Jedediah Smith (1826), and John C. Fremont (1843), investigated the area and found it attractive. Mountainman Daniel Potts, who came in 1827, said that the Utah Valley was beautiful. The Mormon Battalion also used the road in 1848 on their way back from California and the Mexican War, and the 49ers used it to go west for gold.

Early pioneer settlement is marked by places such as the Winward Reservoir. Payson farmers built the reservoir between 1890 and 1907 with horse teams and drags and named it after the city's first water master.

Later in the mid-1930s, the CCC made great contributions to the development of the byway and its components. For example, the CCC's rockwork allowed both the paved byway road and the stream to occupy the narrow space that it does.

The old Loafer Ski Area and the Maple Dell Scout Camp demonstrate the longtime popularity of the Nebo Loop Scenic Byway for recreation. The Loafer Ski Area was a popular place to relax from 1947 to the mid-1950s. The old slope, whose concrete slab foundations you can still see, had a 930-foot-long towrope and a 284-foot elevation drop. The ski area was rudimentarily furnished: a simple shelter, a toilet, and an outdoor picnic area.

The Maple Dell Scout Camp has produced vivid memories for Utah scouts since 1947. Continual improvements have been made at the camp; one of the most notable was the construction of a large lodge in 1960. Later, a dance hall, cottages, and a swimming pool filled with water from a nearby icy spring were added.

By preserving the Nebo Loop as it is today, visitors are able to see this beautiful wilderness as it was 100 or 200 years ago. Its more recent history is preserved in its museums and exhibits and in structures and buildings all along the byway.

The Nebo Loop Scenic Byway takes you into the Wasatch mountain range, where you overlook the Utah Valley. The range was formed from great movements of the earth's crust and an uplift of sedimentary layers. Viewing the topography from the byway gives you a sense of Utah's place in the Rocky Mountains.

Some favorite places for travelers on the Nebo Loop Scenic Byway are the Payson Lakes Recreation Area and Devil's Kitchen. Climbing the byway toward the lakes, you'll pass Payson Creek running through the forest. When you reach the peaceful lakes, you'll find them to be a mountain retreat perfect for fishing, picnicking, or just enjoying the serenity of the gently lapping waters.

The Devil's Kitchen has been compared to Bryce Canyon: Red rock and strange pillars of rock called hoodoos decorate this part of the byway. This is where Utah's sandstone sculptures begin.

The Nebo Loop Scenic Byway travels through the Uinta National Forest full of cottonwoods, maples, pines, and aspen. The forest springs up on either side of the road, shading it with millions of leaves. You may also notice the change in plant life as you ascend the byway; views of sagebrush are soon overtaken by pine and spruce trees. Among the trees live elk, deer, and bobcats. On a very rare occasion, a bear or cougar comes into view, but these creatures spend time in the most secluded places.

From lush forests to sandstone basins, the Nebo Loop offers a compact view of some of Utah's unique terrains. Be sure to explore realms of the Nebo Loop Scenic Byway -- all created by nature.

All the typical outdoor recreational activities can be done here, and some activities, such as hunting and horseback riding, that are rarely allowed in other urban forests are allowed here. Nebo Loop is also a popular area for watching wildlife; specific viewpoints have been designed for observing deer, elk, moose, and bears.

Because the Nebo Loop Scenic Byway is so popular, reservations must be made at least a year in advance for Blackhawk and Payson Lakes Campground; the typical weekend occupancy rate is 95 percent during the camping season.

Payson Lakes Campground is the most popular because it offers swimming, canoeing, hiking, fishing, a fully accessible nature trail, and fishing piers for people with disabilities. Few scenic byways offer so much recreation while showing so little evidence of use.

Although the Nebo Loop Scenic Byway attracts more than one million visitors each year, the design of the facilities makes them almost fade into the woods, keeping them fairly invisible to a driver. Payson Lakes Campground illustrates this fact by offering myriad recreational activities that remain hidden from the byway, yet the road is only a few hundred feet away.

In the midst of the typical camping experiences is the Mount Nebo Wilderness Area, which offers primitive, roadless recreation for the adventurer. In the winter, byway recreation includes ice climbing, snowmobiling, snowshoeing, and cross-country skiing.

Cities it runs through: Payson

Considerations: Most of the Nebo Loop Scenic Byway is somewhat narrow and winding. This means that you won't have much opportunity to pass slower vehicles, and speed limits average 30 mph. Plan to sit in the front seat of your vehicle if you are susceptible to carsickness. A 200-foot-long section of the route consists of hairpin curves, so you must slow to about 15 mph in order to get around the 90-degree turns safely. Heavy snowfall in the winter necessitates the closure of the Nebo Loop Scenic Byway to passenger vehicles from October to the first of June each year. However, Utah State Park employees groom the road for winter use.