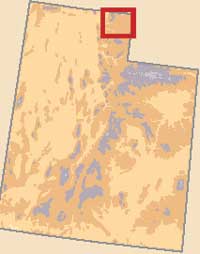 You won't regret taking a scenic drive along Utah's Logan Canyon Scenic Byway. Beautiful mountains that tower over the city of Logan and the turquoise waters of Bear Lake captivate visitors and residents year-round. You'll be enchanted by inland seas, a dramatic landscape surrounding the Logan Canyon Scenic Byway formed by great earthquakes and mountains that tower over the road on both sides.

Driving the Logan Canyon Scenic Byway is like entering a new world where the mountains, trees, and river together reveal the undying patterns of nature. Learn more about this new world, including the many cultural and historical highlights you'll discover along the way.

From mountain men to mountain climbers, Logan Canyon has fostered a variety of cultures from its earliest days. As cultures have shifted and evolved over the last few centuries in this corner of northern Utah, memories of the past are still in place. Cultural influences of mountain men and Native Americans still surface from time to time in the modern cultures of agriculture and industry.

The Shoshone and Bannock nations had been living in the areas near Cache Valley and Bear Lake for many years before their lands were forever changed by the coming of fur trappers and, later, settlers. Local nations still gather to practice beautiful cultural dances and songs; their artwork can be seen in summer fairs and festivals. Mountain men are also honored with festivals and activities.

The coming of the Mormon pioneers made a significant impact on the culture of the area. Settlers from the Church of Jesus Christ of Latter-Day Saints (LDS) developed an agricultural society that still thrives in Cache Valley. The Mormon pioneers also brought with them an appreciation for family and heritage.

Today, because they live so close to a perfect wilderness, most everyone in Cache Valley and Bear Lake has a personal attachment to at least one aspect of Logan Canyon. From exploring nature trails to fishing and canoeing, the skills and pastimes of the first people in Logan Canyon remain with today's residents.

Although most of the places in Logan Canyon were named in the last 150 years, influences from an earlier past can still be found in places along the byway. Guinavah-Malibu Campground carries the Shoshone word for bird water, which was the earliest name for the Logan River. A mountain man named Jim Bridger gave his name to the region that encompasses the canyon known as Bridgerland.

Cache Valley, at the west end of the canyon, was named for the caches that trappers made in the area to store their furs. As Mormon pioneers entered the area in mid-1800s, they established Temple Fork, where they procured the materials they would need to build their temple and tabernacle. And many of the names in the canyon came from the days of the Civilian Conservation Corps (CCC). Most notable of their achievements is the amphitheater at the Guinavah-Malibu Campground.

Stories of highfalutin families at Tony Grove or an 11-foot-tall bear named Ephraim can be found in places all along the way. One of the best places to find out about Logan Canyon history is at Lady Bird Overlook at the mouth of the canyon in Logan, a location that carries history of its own.

The overlook was named for President Lyndon Johnson's wife, Lady Bird Johnson, who initiated the highway beautification plan in the 1960s. Here you can discover the story of a 1,000-year-old tree and find out why one of the most beautiful spots on the byway is called China Row.

Logan Canyon was in the land of the Shoshone and the Bannock. Later, Logan Canyon saw the days of mountain men trapping animals for their fur. When the Mormon pioneers arrived, the wild land of Logan Canyon was forever changed. Civilization came to the Logan Canyon Scenic Byway to explore it and discover the wonders of the canyon in the same way that travelers do today.

In Logan Canyon, wilderness waits at the doorstep of the Cache Valley community. The canyon is alive with wildflowers, shrubs, and trees of every kind. Although the mountains seem high, they were once covered with the water of an inland sea called Lake Bonneville. Many of the rock formations that visitors enjoy in the canyon were caused by erosion from Lake Bonneville.

Outcroppings, such as the one called the China Row, are simply ancient beaches where the sediment has become solid and provides a perfect place for activities like rock climbing. Just looking up at these mammoth walls of nature is a mesmerizing experience; knowing that they were once ancient beaches makes them even more exotic.

The enchanting Tony Grove Lake, formerly a glacier, is a favorite natural feature in the canyon. Covered with wildflowers in the spring, the shorelines of the lake are partly a mountainside and partly a forest of pine trees. Water has carved numerous caves through the limestone of the canyon, including Logan Cave and Ricks Spring.

The Logan River is the heart of Logan Canyon, its rhythm changing with the seasons. During the spring, the river rages with snow melt runoff, reaching high velocities. In summer, the river slows, fed by delayed runoff from groundwater storage and augmented by the many springs and tributaries that flow into it.

The river surface begins to freeze in the fall, and by midwinter the river forms ragged sheets of ice. When the weather is fair, visitors on the shores of Second Dam watch fish jumping and beavers swimming across the water to their dams. In the winter, deer step lightly on the mountainside and pause by the river for a drink.

Logan Canyon recreation is one of the main reasons people come to Cache Valley to visit and to stay. After a short drive into the mountains, you'll find a garden of recreational opportunities -- some relaxing and others extreme. From an early morning hike to rock climbing, Logan Canyon is the best place for miles around to unwind.

Logan Canyon's limestone outcroppings are calling for you to climb them. Rock climbers gather from spring through fall to challenge the million-year-old mountainsides. Most of the climbs are bolt-protected sport climbs.

In winter, climbers can be found making their way up a frozen waterfall. Another mountainside challenge is offered within the crisp winter air at Beaver Mountain, where skiers and snowboarders gather to test skills of balance and coordination.

Although they might be the most exciting of mountain sports, skiing and climbing aren't the only activities available in Logan Canyon. With 300 miles of hiking trails, Logan Canyon is also a hiker's paradise. Trails lead to every kind of destination, from an ancient juniper tree to a pristine mountain lake. Runners and cyclists especially love the Logan River Trail starting at Red Bridge. On summer mornings, the air is cool and green leaves hang over the trail, creating a scenic place to exercise.

Roads available at Temple Fork and Right Hand Fork provide opportunities for ATVs and motorcyclists to enjoy the exciting back roads to the canyon. During the winter, trailers carrying snowmobiles can be seen entering Logan Canyon. They might be heading to Franklin Basin or The Sinks, where valleys between the trees offer the perfect places to traverse the snow.

When all the snow melts, water sports reach their heights in Logan Canyon, whether you are boating or fishing. Logan Canyon is home to the Logan River and Bear Lake, where many travelers take boats and jet skis during the summer for an exhilarating run across its mesmerizing waters. Visitors can also fish for the Bonneville Cisco, which is only found in Bear Lake.

The Logan River is famous for fly-fishing, but anglers of every kind and age gather at Second and Third Dam to try their luck with a pole. A careful observer will be able to see groups of trout as they gather underneath a bridge nearby, but scuba divers at the east end of Bear Lake have the best view of the local fish. A more secluded setting is found at Tony Grove Lake, where the most popular activity -- besides fishing -- is canoeing.

Considerations: Please note that Logan Canyon Scenic Byway is a two-lane highway. Although the byway has more passing zones on the upgrade than the downgrade, you'll find only five to eight passing zones. Also, because winter weather can be severe, the highway patrol may require that vehicles carry tire chains.