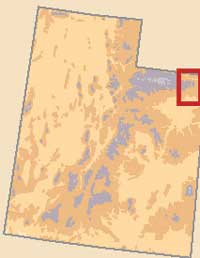 As one of the most aptly named landscapes in the country, Flaming Gorge provides the kind of scenic vistas that refuse to fit in the viewfinder of your camera and must be relived in your memory after you return home.

Driving the Flaming Gorge-Uintas Scenic Byway, you get to watch Flaming Gorge and the Uintas Mountains unfold from several different perspectives.

Beyond its scenic beauty, Flaming Gorge-Uintas Scenic Byway has pieces of stored ancient history within its grounds and cliff sides. Pictographs and petroglyphs are thought to have been left behind by the Fremont Indians many hundreds of years ago. Ancient rock art can also be found near Dinosaur National Monument on one of the nature trails.

But ancient history goes back further on the Flaming Gorge-Uintas Scenic Byway, and one of the main reasons people travel to this area is to see the largest quarry of Jurassic dinosaur skeletons in the country. Dinosaur National Monument is a must-see on the Flaming Gorge-Uintas Scenic Byway. Discovered in 1909, the quarry has yielded 11 dinosaur species, plus more than 1,600 bones. Here, you can see bones in and out of the quarry and all the places they have to go in between.

View Enlarged Image This map will guide you along Flaming Gorge-Uintas Scenic Byway.

The route along the Flaming Gorge-Uintas Scenic Byway is rich in history and culture. The first European explorers were Fathers Dominguez and Escalante. Wesley Powell explored the Green River and named many of the byway's geographic sites, including Flaming Gorge.

The Flaming Gorge-Uintas Scenic Byway parallels the Outlaw Trail that Butch Cassidy and members of the Wild Bunch used. Two turn-of-the-19th-century homesteads on the byway, Swett Ranch and Jarvies Ranch, are presently managed and interpreted by the Forest Service and Bureau of Land Management.

The town of Vernal celebrates Outlaw Days with an outdoor theater depicting sagas of the Wild Bunch, a ride along the Outlaw trail, and other community events. The influence of the Mormon settlers is also evident in the Manila and Vernal areas.

The Flaming Gorge-Uintas Scenic Byway winds over the eastern flank of the Uintas Mountains and through the Flaming Gorge National Recreation Area, leading you through diverse plant communities that provide a great habitat for more than 390 species of birds, mammals, reptiles, amphibians, and fish. You'll have access to several developed viewing platforms, overlooks, displays, and signs that interpret the different wildlife species.

This byway is one of the few areas in the United States where visitors have the chance to see large herds of deer, elk, moose, and pronghorn antelopes on any given day. The seasonal weather changes complement the wildlife migration patterns, which means that you may encounter Rocky Mountain bighorn sheep, river otters, yellowbellied marmots, kokanee salmon, red-tailed hawks, mountain bluebirds, golden eagles, bald eagles, and ospreys. Additionally, thousands of sandhill cranes migrate through the Vernal area in April and October.

This landscape is the basic setting for the real Jurassic Park, not only for dinosaurs but also for other prehistoric creatures, such as sharks, squid, and turtles. The Utah Field House of Natural History and Dinosaur Gardens serves as an orientation center for the byway.

Dinosaur National Monument features the largest working dinosaur quarry in the world; the world-class displays of dinosaurs and interpretive exhibits provide you with a greater appreciation for the geologic and prehistoric features found along the byway.

Flaming Gorge Reservoir is the most popular recreation spot in Utah. It offers highly developed facilities for camping, hiking, riding, skiing, snowmobiling, and other activities on a year-round basis. The visitor center, gift shops, restaurants, outfitters, guides, boat rentals, and other retailers work together as partners to make this a quality experience.

Flaming Gorge Reservoir is surrounded by 367 shoreline miles, creating an angler's paradise. World-record brown trout exceeding 30 pounds and lake trout over 50 pounds have been caught here. People from all over the world visit the Green River for premier blue-ribbon fly-fishing experiences.

States it runs through: Utah, Wyoming

Considerations: Because the public lands along the Flaming Gorge-Uintas Scenic Byway are managed under the Multiple Use Concept, you may have the opportunity to encounter a real western cattle drive along the roadway during the spring and fall months. Sections of the mountain highway are occasionally closed due to extreme snowfall during the winter.