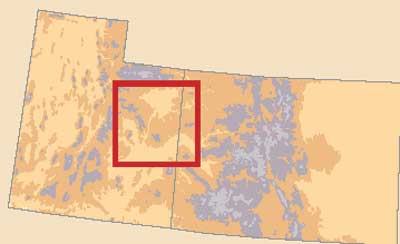 The Dinosaur Diamond Highway provides a unique and unparalleled opportunity to experience the thrilling story of dinosaurs and the science and history of discovery behind them.

The route combines opportunities to witness dinosaur bones still in the ground being excavated and to see dinosaur bones prepared by paleontologists for museums. Museums all along the byway display both reconstructed skeletons and fleshed-out re-creations of dinosaurs found in the area.

In between and sometimes overlapping the dinosaur sites are areas of major archaeological interest. The prehistoric Native Americans who occupied this area saw its many rock cliffs as ideal surfaces for their petroglyphs and pictographs. Some of the finest examples and densest concentrations of this rock art in North America are located along or near the byway.

Along with unique red, gray, and green rock formations, you can enjoy forested mountain passes, canyons, cliffs, rivers, and plateaus along the Dinosaur Diamond Highway. Wide-open spaces and miles of unobstructed views are the reward for those who travel this byway.

The Dinosaur Diamond Highway showcases the archaeological qualities of about 1,000 years ago, when Native American cultures lived and hunted in the area. These cultures maintained their way of life in the desert. The best evidence of these ancient people is the abundance of petroglyphs and pictographs in the area. (Petroglyphs are pictures that are pecked into rock surfaces by using harder rocks, often made into tools; pictographs are pictures painted onto the rocks.)

Hundreds of rock surfaces in the Moab area display rock art that was created by the Paleo-Indian, Fremont, and Anasazi cultures. The Golf Course Rock Art site near Moab Golf Course is a large area covered with human and animal figures. Within Arches National Park, Courthouse Wash has both petroglyphs and pictographs on a panel that is 19 feet high and 52 feet long. Also in Arches, Ute rock art may be seen at the Wolfe Ranch near the Delicate Arch Trailhead.

Between Wellington and Myton is Nine Mile Canyon, the greatest concentration of rock art in the United States and the premier site of the archaic culture of the Fremont Indians. The canyon also has examples of dwellings that have been untouched for hundreds of years.

Nine Mile Canyon is well preserved because of the dry climate and isolation from large population centers. Because of this preservation, the canyon is home to more than 1,000 rock art sites.

Eastern Utah has been and continues to be home to many ranches and cattle. In celebration of this culture, rodeos are held periodically throughout the area. In Vernal, the Dinosaur Roundup Rodeo is one of the largest rodeos in the world. In Price, the Black Diamond Stampede Rodeo is held every year.

In Moab, Butch Cassidy Days celebrate the history of the area's most famous outlaws. The San Rafael Swell was a favorite hideout for Butch Cassidy and the Sundance Kid and their gang. The Outlaw Trail went from the wild country of Robber's Roost down by Hanksville, up through the San Rafael Swell and either Nine Mile Canyon or along the canyons of the Green River into the Uinta Basin. It then either continued along the Green or up and over the eastern Uintas to Brown's Park in the tri-state area of Wyoming, Colorado, and Utah. Matt Warner, a former outlaw in the gang, was elected marshal in Price for a number of years.

Today, the Outlaw Trail Festival is held every summer in Vernal in honor of these famous outlaws. Josie Morris, an old friend of Cassidy's, built a small cabin in Cub Creek, part of Dinosaur National Monument. It is preserved and stabilized so that visitors can experience what it was like to rough it in the Old West.

Moab is known as the mountain bike capital of the world, but it is also home to many different festivals and celebrations. Every year in the early spring, participants from all over gather for the Jeep Safari. The slick red rock and warming temperatures in the desert at that time of the year make it a perfect location for extreme driving. If you have more traditional events in mind, the Moab Film Festival showcases the work of independent filmmakers, and Moab hosts an outdoor music festival as well.

Stroll by Colorado's largest and most diverse outdoor sculpture exhibit, on display along Grand Junction's downtown shopping park. The exhibit, entitled Art on the Corner, highlights a unique variety of work by local artists. The nearly 20-year-old ongoing event introduces visitors to many distinct artistic approaches.

The first recorded venture of Europeans into the area was the Escalante-Dominguez Expedition in 1776. This expedition began in Santa Fe and attempted to blaze a trail to California in order to access the missions located there; however, their journey was unsuccessful due to the barriers formed by the western Utah deserts.

The expedition was led by Father Silvestre Velez de Escalante and Father Francisco Dominguez, accompanied by Captain Bernardo de Miera y Pacheco, a retired military engineer. They explored Canyon Pintado from Douglas Pass toward what is now Rangely, Colorado; crossed the Green River near Jensen, Utah; and traveled as far west as Spanish Fork before turning back south to return to Santa Fe.

While Escalante and Dominguez came to the area in search of another route west, others have been drawn to eastern Utah because of scientific exploration. Beginning with John C. Fremont in the early 1840s, reports of the majesty of the mountains, the roaring rivers, the expanse and austerity of the deserts, the abundance of game, and the clues to vast mineral resources have enticed adventurers to the intermountain west of the United States.

Settlement in the area inevitably brought about great changes to the landscape, such as mining. In the Uinta Basin, Gilsonite was the first hydrocarbon to be mined, bringing a small, narrow-gauge railroad (the Uinta Railroad) into the southeastern edge of the basin near Dragon. Although several attempts were made to build more railroads into the basin, none was successful. As a result, the Uinta Basin remains one of the largest areas of the United States to be undeveloped by railroads.

After World War II, petroleum development and phosphate mining became integral to the rural economy. The railroad from Grand Junction, Colorado, to Price, Utah, brought the development of the coal resources in Carbon and Emery counties. As a result of this mining industry, an influx of some 18 different ethnic groups from across southern and eastern Europe and Asia came to work in the mines.

The area encompassed by this diamond-shaped byway is the best place in the world to see dinosaurs in a variety of ways: models and bones on display in museums, bones still in the ground at the sites where they were discovered, bones currently being excavated by paleontologists, and trackways preserved in rocks.

Today, the bones and tracks of dinosaurs can be seen at various sites along the Dinosaur Diamond Highway. Many of these sites are located in their natural settings, which makes this byway one of a kind. Actual dinosaur quarries, which are areas where dinosaur bones are excavated, are along the byway, especially near Moab, Vernal, and Price.

The only two enclosed dinosaur quarries in America are located on the Dinosaur Diamond: one at Dinosaur National Monument and the other at the Cleveland Lloyd Dinosaur Quarry. The bones discovered at Dinosaur National Monument in 1909 by Earl Douglass date from the Jurassic Period (about 145 million years ago) and were preserved in a riverbed that has been quarried for fossils. Portions of more than 300 individual dinosaurs have been recovered, making the site one of the most prolific dinosaur quarries in the world.

The Cleveland Lloyd Dinosaur Quarry has the densest concentration of Jurassic dinosaur bones in the world. The quarry is so dense because, about 145 million years ago, dinosaurs were trapped in a muddy bog. Area ranchers found the jumbled remains of these bones, and the quarry has provided dinosaur mounts in more museums around the world than any other in existence. At this quarry, 44 Allosaurus specimens have been excavated; appropriately, Utah made the Allosaurus the state fossil in 1988.

In nearby Price, dinosaur skeletons, tracks, and fossils are on display at the College of Eastern Utah Prehistoric Museum. These exhibits invite visitors to learn more about the history of the area and the effect of dinosaurs on eastern Utah.

River rafting is a popular sport to participate in along the Dinosaur Diamond Highway. Both calm-water and white-water trips are available through companies out of Vernal, Moab, and Green River.

The whitewater sections can be frightening even to experienced river runners during the high water levels of spring melt, yet some stretches of both the Green and Colorado Rivers have flatwater that can be enjoyable in canoes. Grand scenery waits around every bend in the river. In fact, the Green River in Desolation Canyon has cliffs higher than the Grand Canyon in Arizona.

Hiking opportunities are everywhere along the byway. The terrain is varied, giving visitors a feel for the many aspects of the landscape along this route. In the mountains, numerous spectacular peaks and lakes are accessible to hikers. The Uintas Mountain Range, the largest east-west mountain range in the 48 contiguous United States, includes the highest point in Utah -- Kings Peak -- at 13,528 feet.

The desert, particularly near Moab, is another popular place to hike and is an entirely different experience from alpine hiking. The red slickrock around Moab provides the perfect surface for hiking while looking for dinosaur trackways or arches.

All of the national parks and monuments along the Dinosaur Diamond Prehistoric Highway are outstanding places for hiking and camping as well. Outfitters are available all along the byway for visitors who want guides, horses, or even llamas to help with the load. Hunting and fishing are also popular recreational activities in the area.

Moab has world-famous mountain biking trails to challenge expert riders and lure beginners. The city has quickly become a mountain bikers' paradise, with trails traveling over many miles, often on slickrock. The Slickrock Bike Trail is located east of Moab in the Sand Flats Recreation Area. The Poison Spider Mesa Trail is another popular trail for both jeeps and bikes and is located on the Potash Road. This trail offers spectacular views of the area surrounding Moab and the Colorado River. Fruita also has excellent mountain biking trails.

Winter sports are also popular along the Dinosaur Diamond Prehistoric Highway. Snowshoeing, cross-country skiing, snowmobiling, and ice fishing can be enjoyed in the high country, while hiking (without the summer heat) is a popular activity in the southern desert areas.

See the next page for a suggested tour of the Dinosaur Diamond Prehistoric Highway.

Considerations: The mountain passes at Reservation Ridge on U.S. 191 and Douglas Pass on CO 139 can be treacherous during winter storms. These roads are rarely officially closed, but there can be delays of up to a few hours. Cleveland Lloyd Dinosaur Quarry is at the end of 13 miles of gravel road that is accessible to sedans in all weather except deep snow; it is closed during the winter months. The Mill Canyon Dinosaur Trail and Copper Ridge Dinosaur Trackway are reached by a couple of miles of dirt road that is accessible to two-wheel-drive automobiles in good weather but are not advisable in wet conditions. Dinosaur trackways are difficult to see under snow cover.