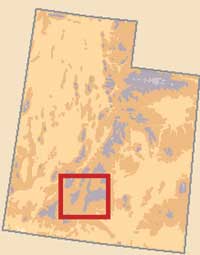 As you drive along Utah's Scenic Highway 12, the byway that connects Bryce Canyon National Park and Capitol Reef National Park, you are treated to enticing views and stops, along with a kaleidoscope of color. Byway towns in between offer a flavor of a simple life in the middle of a fantastic wilderness. Historic stops and pull-offs provide stories for curious byway travelers. Ancient ruins and artwork can be found throughout the canyons and rock faces that line Scenic Highway 12, otherwise known as A Journey Through Time Scenic Byway.

Driving Scenic Highway 12 through some of Utah's most unusual landscapes, the climate and topography seem all too fantastic for human beings to dwell there. Nevertheless, evidence of ancient civilization is around every corner and within almost every crevasse of the canyons along Scenic Highway 12.

The Anasazi, Fremont, and Utes all left their mark on the rugged and challenging land. Their occupation has been preserved in the sandstone of the plateaus and under the sands and soils of the valleys.

The structures that the Anasazi left behind astound travelers and archaeologists alike. Alcoves high in the rocks hold ancient stone granaries where this hunting and gathering culture would store the food they had collected. The granaries reside in grooves within the cliff side and consist of rocks stacked like bricks with a small hole in the center near the bottom of the structure. It is not known how the people of so long ago would have reached these heights.

Farther along A Journey Through Time Scenic Byway, a remarkable display of an excavated Anasazi village is located on the byway in the community of Boulder. The Anasazi Indian Village State Park Visitor Center is located at the site

of a village that once held 200 people. Walls of homes and structures of pit houses are displayed there.

Some of the most impressive examples of rock art can be seen at Capitol Reef National Park as images of ancient people and animals line the red rock face of nearby Highway 24 and the Fremont River.

The archaeological remains and artwork of the Fremont Indians and the Anasazi enable modern-day experts and visitors to speculate about what these people must have been like. These cultures had a belief system of legends and histories that explained the landforms that surrounded them. One thing is certain: The cultures of the Anasazi, Fremont, and Paiute revered the land of Highway 12 as a special land.

Mormon pioneers established communities more than a century ago whose presence today has brought a new collection of stories and histories. The communities that visitors will observe display the classical elements of a Mormon settlement. People would gather in a town and

spread their farms all around the town.

The first explorers were Spanish and claimed the land for Spain in 1776. The name of the town Escalante comes from one of the priests who was on the expedition, Silvestre Velez de Escalante.

John Wesley Powell more thoroughly explored the land nearly 100 years later in 1869 on a treacherous journey on which he lost several of his company. By the time he explored the area, Mormon pioneers had already begun to inhabit the region.

The town of Panguitch was the first place the pioneers attempted to settle. Because of conflicts with the Native Americans, they abandoned the settlement until 1871. A string of other towns, including Tropic and Boulder, retain a western town appearance with wood storefronts, stone walls, and old-fashioned architecture.

Red Canyon, Bryce Canyon, and Kodachrome Basin offer some of the strangest geological sites. The walls of Bryce Canyon are lined with singular, humanlike pinnacles that protrude from the rock. The irregular shapes of the rocks in Bryce Canyon were formed when ancient rivers carved exposed layers of the earth. The meandering of these rivers must have been erratic, for there are thousands of paths through the pinnacles.

Red Canyon displays a range of orange and red colors in the rock. Take a hike to discover all the natural arches there. In Kodachrome Basin, evidence of another natural wonder from millions of years ago is in the strange pinnacles of stone. This used to be a geyser basin not unlike the kind found in Yellowstone National Park today. Geologists believe that the towers of stone there are actually fossilized geysers. Their vivid colors are evident from a distance.

Some of the most captivating hikes in Utah are located just off Scenic Highway 12 in the slot canyons of The Grand Staircase or near one of the byway's state parks. Red Canyon and its accompanying canyons offer trails for hikers, bikers, horseback riders, and ATV enthusiasts.

Time to allow: One to three days.

Considerations: Several stretches of A Journey Through Time Scenic Byway are quite isolated and rugged, some with 12 percent grades. The road climbs to 8,000 feet as it crosses Boulder Mountain, rising and falling in steep switchbacks through Escalante Canyons and Boulder Mountain. The Aquarius Plateau/Boulder Mountain segment receives heavy accumulations of winter snow and may be closed temporarily during heavy snowstorms. Please also note that The Hogsback is high and narrow and can be windy. High-profile vehicles should be prepared. 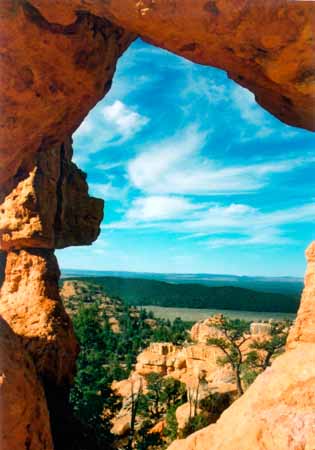 ©Byways.org Stone arches like this one in Bryce Canyon are visible along Utah's

Spanning a route of more than 120 miles, Utah's Scenic Highway 12 travels through some of the most diverse and ruggedly beautiful landscapes in the country. The surrounding red rock formations, slickrock canyons, pine and aspen forests, alpine mountains, national and state parks, and quaint rural towns all contribute in making Highway 12 a unique route well worth traveling.

This tour starts in the vicinity of Bryce Canyon on the western end of the byway.

Escalante State Park: Continuing east on Highway 12, the next stop is Escalante State Park, a petrified forest with mineralized wood and dinosaur bones. The park also has a reservoir for swimming, fishing, and boating (with ramps) as well as hiking trails, picnicking, bird-watching, and camping.

The name of this drive really says it all -- you'll feel like one of yesterday's explorers, traveling through the lands of ancient peoples on Utah's Scenic Highway 12.