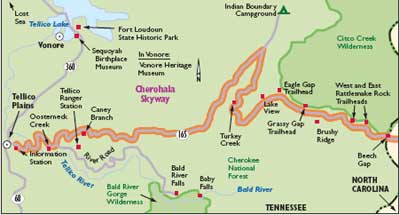 View Enlarged Image The Cherohala Skyway takes you to mile-high mountain and woodland vistas. This map shows the Tennessee portion of the Skyway.

Experience first-hand amazingly towering trees by traveling the Cherohala Skyway in North Carolina and Tennessee, and you will agree that nothing could be lovelier. Visit in the fall when vibrant vermilion, golden, and orange leaves drape the trees surrounding the skyway. Or plan a leisurely summer road trip, leaving plenty of time for picnics, hikes, fishing, or many of the other activities available on the Cherohala Skyway.

The Tellico River parallels part of the skyway, delighting canoeists and kayakers from all over. Follow the river with paddle in hand, and bask in the sunlight and beauty of the surrounding forests. With hundreds of miles of hiking trails traversing the national forests, you're bound to find a favorite.

Botany lovers will want to whip out their sketchbooks to capture in ink some of the 2,000 native plant species that thrive around the Cherohala Skyway.

Catch your breath by pausing to admire the wildflowers sprinkled throughout the landscape in the spring, or make camp at one of the many campgrounds and spend several days exploring the backwoods.

This trek winds into the heart of the woodlands in two states, with many opportunities for hiking, fishing, and spotting the local flora and fauna. Find the best places to stop and admire the view in the next section.

Time to allow: One hour and 45 minutes

Highlights of the Cherohala Skyway 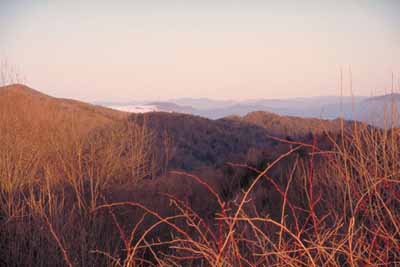 With spectacular views it is hard to leave the heights of the Cherohala Skyway, but some of the most interesting natural and Native American sites are just beyond the byway. A few of those venues are highlighted here.

Fort Loudoun State Historic Park: Nearby is Fort Loudoun State Historic Park. Operating from 1756 to 1760, Fort Loudoun was built by the British to protect the Cherokee during the French and Indian War. Though the original buildings are long gone, the current replica is historically accurate. Activities allow visitor participation, and a visitor center explains the fort's role in the French and Indian War.

Sequoyah Birthplace Museum: Learn about the lifestyle of the Overhill Cherokee at the Sequoyah Birthplace Museum. Born near where the museum stands and roaming the area as a boy, Sequoyah was born in 1776 and was the man who gave the Cherokee nation, formerly illiterate, its unique writing system. The museum is the only tribally owned and operated historical attraction in the state.

Vonore Heritage Museum: Before leaving the Tellico Lake area, be sure to stop at the Vonore Heritage Museum on Church Street. The museum features farm implements and tools, household items, and lovingly created miniature replicas of local historic venues. Also exhibited are many items donated by local citizens to help in the telling of the Vonore story.

Lost Sea: Descending even farther from the heights of the Cherohala Skyway at the town of Sweetwater is the Lost Sea, America's largest underground lake. Part of the larger Craighead Cavern system known and used by the Cherokee, the lake is extensive, its depths never having been completely mapped. Glass-bottomed boats carry visitors into the Lost Sea, a Registered National Landmark, where rare and beautiful geologic formations in massive cavernous rooms can be seen.

Bald River Falls and Baby Falls: Viewable from the car or via hiking paths, Bald River Falls in the Cherokee National Forest is a stunning sight as the plunge over rock outcroppings makes for an 80-foot white-water falls. As an added bonus, just a quarter of a mile up the road is Baby Falls, a playpen for kayakers and swimmers.

Stratton Ridge: Be on the lookout on the left side of the road for the next noteworthy overlook. At 4,420 feet, Stratton Ridge looks over lower portions of the Cherohala Skyway and provides information about the byway and surrounding area on informational kiosks. Picnic tables and restroom facilities are also available here.

Spirit Ridge Overlook: From the roadway take a gentle walk less than a mile through the hardwood forest to the Spirit Ridge overlook. Here visitors get seemingly unending panoramas of splendid mountaintops. The trail leading to the overlook is wheelchair accessible and is appropriate for people of all ages.

Hooper Cove: Hooper Cove is an open area to get out and enjoy the view from this 3,100-foot high vantage point. Four picnic tables give visitors an opportunity to eat a bit while drinking in the beautiful vistas. This is a great location for fabulous photos of the Santeetlah Creek rushing below.

Joyce Kilmer Memorial Forest: Just north of the Cherohala Skyway is the Joyce Kilmer Memorial Forest. Once the uncharted hunting ground of the Cherokee, the best way to see the Memorial Forest is on foot using the Joyce Kilmer National Recreation Trail. It is an easy trail, possible for novices and families with small children to enjoy. A tribute to World War I soldier and author of the poem "Trees," the forest is a rare and outstanding gathering of virgin Appalachian hardwood trees, some as old as 400 years and as large as 20 feet in circumference at their base.

The Cherohala Skyway opened in 1996, but it's already gaining notice for outstanding mountain and woodland vistas and unparalleled views of Cherokee ancestral lands.