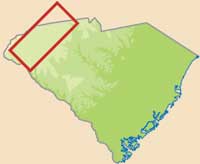 The Cherokee Foothills Scenic Highway offers travelers a beautiful and relaxing drive through some of South Carolina’s most historic sights. Looming majestically beyond the low, soft hills of the Piedmont, the Blue Ridge escarpment thrills the soul of the mountain lover. The Cherokees called these heights the "Great Blue Hills of God." The stream-laced foothills and rugged mountains of the Blue Ridge have helped shape the development of South Carolina's Upcountry. The Blue Ridge Mountains are forested and steep, and in some places they are penetrable only along narrow passes cut by roaring, cliff walled rivers. From the mountain heights, some of these rivers plunge hundreds of feet in breathtaking falls.

While today's travelers may hear echoes of the area's Cherokee heritage in place and river names such as Seneca, Keowee, Jocassee, Tamassee, Tokeena, Toxaway, and Eastatoe, the first strains of the Cherokee recessional were truly heard in 1776. As the new American nation was forming, the region's first white settler, Richard Pearis, married a Cherokee woman and built the area's first business -- a trading station and gristmill -- on the falls of the Reedy River in what is now downtown Greenville. Following the Revolutionary War, treaties with the Native Americans opened up what was called the Pendleton District (now Anderson, Pickens, and Oconee counties) and land-hungry settlers flowed in.

These lofty green mountains have long drawn vacationers to enjoy hiking trails, raft on the whitewater of the Chattooga, and explore history at a Revolutionary War battlefield.

This scenic roadway serves as a home address for many families descended from early settlers whom William Bartram (author of the 1791 book of Travels) called "friendly and hospitable" but with manners and customs different from his other experiences. A great deal of the area still seems remote and undeveloped, particularly in Greenville and Pickens Counties. Most of the development is located in Spartanburg and Cherokee counties, where the terrain is conducive to development and the roadway has existed the longest. Those touring the highway for the first time today will be mesmerized by a corridor not much changed since Bartram made his journey centuries ago. This is due to statewide efforts to prioritize the preservation of the Upcountry lands.

Cowpens National Battlefield commemorates a decisive battle that helped turn the tide of war in the South. On this field on January 17, 1781, Daniel Morgan led his army of tough Continentals, militia, and cavalry to a brilliant victory over Banastre Tarleton's force of British regulars. Because he had sciatica so bad that it was too painful for him to sit on a horse, Morgan retired to his home in Virginia after the Battle of Cowpens. On March 25, 1790, he received a gold medal that Congress had struck to honor him for his victory at Cowpens. Following the Revolution, Morgan organized and led a group of militia against the protesters during the Whiskey Rebellion. In 1797 he was elected and served one term in the House of Representatives. He died on July 6, 1802.

The Cherokee Foothills Scenic Highway has it all. This highway has history, culture, recreational opportunities, and scenery, all of which are incomparable. However, on SC Highway 11, everything comes back to the natural features. These features are exceptional and were the choice of the Cherokee Indians, who called this area the "Great Blue Hills of God." They were also the main attraction for early settlers at the time of the Revolution. These natural features include miles of parkland trails, unique mountains, and wonderful flora and fauna.

Travelers who drive along SC Highway 11 leave traffic and tension behind for a leisurely journey through ancient mountains, along rural byways, and through small towns and former mill villages. Those who begin a venture at the western entrance to the Cherokee Foothills Scenic Highway are afforded many views of the area's natural water features, including the shores of Lake Hartwell. As the road proceeds across the region, it crosses numerous small streams as well as many of the region's major waterways, including the Oolenoy, South Saluda, Middle Saluda, North Saluda, South Pacolet, and North Pacolet Rivers. The area also boasts one of the premier whitewater rafting rivers in the eastern United States, the Chattooga National Wild and Scenic River. More than 50 waterfalls can be accessed from SC Highway 11, including Wildcat Falls, which is located next to the roadway on the western edge of Greenville County.

The high hills and distant mountain ridgelines are prominent from northern Oconee County to the western edge of Spartanburg County. A series of ridges separate the northwestern corner of South Carolina from North Carolina. This part of the Blue Ridge mountain range has unique mountains named by the Cherokee Indians who called this area home prior to the 1800s. East of Tamassee, Table Rock, and Glassy Mountains, the landscape begins its descent, entering into Spartanburg County. The lowest lands are found at each of the highway's endpoints. In areas of flat terrain (or as the roadway passes over high ground), the corridor (or viewshed) may extend for miles in the horizon-to-horizon vista.

Located just 45 miles from Greenville, South Carolina, Lake Keowee provides a majestic view, beautiful freshwater lakes, and mountain views. The lake is located close to the small town of Seneca in the northwest corner of South Carolina. Lake Keowee consists of about 18,000 acres and approximately 300 miles of shoreline. Only a small percentage of the shoreline has been developed, resulting in an uncrowded lake. Boating, sailing, fishing, and a variety of outdoor activities are popular in this region.

State it runs through: South Carolina

Considerations: The speed limit along the byway is 50 mph. The only seasonal restrictions are on certain campgrounds.