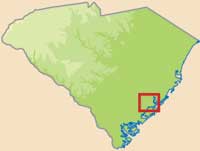 Covering a distance of only 11 miles, the Ashley River Road is a journey into the history, culture, and beauty of the South Carolina low country. Ancient live oaks, Spanish moss stirring in a warm summer breeze, and elegant brick gates hinting at the architecture within hearken back to days gone by. The Ashley River Road itself reflects the history and culture that has been at home along this great river.

The grandeur of the Old South comes alive on this driving tour of old plantations and towering live oak trees.

In addition to the grand architecture of the mansions and gardens of the area, the African-American churches that chronicle their religion from slavery to emancipation are no less remarkable. As the first non-native culture to live in the area, the early slave and subsequent emancipated African cultures contributed to the shaping of the Ashley River Road and the surrounding area.

The Springfield Baptist Church along the byway is an example of community efforts of the African-American culture of the area. Coming together in the mid 1860s, African-American individuals established the first freely organized Baptist congregation. The Ashley River Road connected these congregations with rural African-American communities such as Red Top, Marysville, Sanders, Drayton, Bullfield, and Cherokee. This connection ensured that the heritage of the people would remain intact by allowing open and free communication between people.

The plantation mansions and magnificent gardens are witnesses of the influence of English architecture for both mansion and garden. Drayton Hall is an example of the Georgian-Palladian architectural style, which meant that these homes were often rectangular in shape and that the rooms were arranged symmetrically around a spacious hall. The Middleton Place Gardens also illustrate order, geometry, and balance, with a variety of sweeping vistas and blooming flowers, shrubs, and trees.

An extraordinary blending of plantation, slave, religious, war, and mining history along the Ashley River Road secures this 11-mile stretch of road as an important snapshot of the history of South Carolina. The grand architecture of the plantation mansions, the road itself, and local historic churches speak of a time rich in tradition.

During the colonial period of U.S. history, the low country of South Carolina was ideal for rice plantations, and the nearby Ashley River was used to cultivate these rice fields. The fields were planted, flooded, and harvested at the hands of mainly African slaves.

In addition to work on the plantations, slave labor was an integral part of the construction and development of the Ashley River Road itself. Plantation owners were required to send their slaves to work on the road; consequently, while the funds generally came from the white landowners, the labor for the road is due to the work of the slave population.

The Ashley River Road saw dramatic changes when action at Fort Bull during the Civil War resulted in the abandonment of the fort to Union troops and the burning and looting of many of the great manor houses along the road. With the slave labor era waning, the search for new ways to make money resulted in the mining of nearby phosphate rock. Signs of this mining are seen today in low berms and high mounds of mining tailings from Drayton Hall to Middleton Place.

Time to allow: 25 minutes without stopping, or as much as two days to experience all the National Historic Landmarks

States it runs through: South Carolina

City it runs through: Charleston

Considerations: There are no fees on this byway.