Pennsylvania's Historic National Road is the most time-honored transportation corridor in the United States -- it was one of the first colonial routes traveled by early settlers. George Washington and Daniel Boone were among its first travelers. Now, you can relive the spirit of a growing America by traveling the road and visiting the historic homes, toll houses, and scenic vistas.

As America entered the 19th century, the young nation faced one of its first challenges: how to link the people and cities along the Eastern Seaboard to those on the frontiers west of the Allegheny Mountains. Settlers moving west faced perils aggravated by the lack of a well-defined roadway.

And easterners were unable to take advantage of the abundant produce and goods from the western frontier without a road to transport them over the Alleghenies. The solution was the National Road, America's first interstate highway, and the only one constructed entirely with federal funds.

Construction began in 1811, and by 1818, the road stretched from Cumberland, Maryland, to what is now Wheeling, West Virginia. In time, the National Road ran the whole way to Vandalia, Illinois, a distance of 600 miles. For three decades, the history, influence, and heritage of the National Road have been celebrated at the annual National Road Festival, held on the third weekend each May. The festival features memorable festivities and a wagon train that comes into town.

The National Road was developed from existing Native American pathways and, by the 1840s, was the busiest transportation route in America. Over its miles lumbered stagecoaches, Conestoga wagons with hopeful settlers, and freight wagons pulled by braces of mules, along with peddlers, caravans, carriages, foot travelers, and mounted riders. In response to demand, inns, hostels, taverns, and retail trade sprang up to serve the many who traveled the road. Today, reminders of National Road history are still visible along this corridor, designated as one of Pennsylvania's heritage parks to preserve and interpret history throughout the region.

The first cries for a national road were heard before there was even a nation. Such a road would facilitate settlement and help the budding nation expand in order to survive and flourish. Economic considerations weighed heavily in favor of a national road, which would be a two-way street, allowing farmers and traders in the west to send their production east in exchange for manufactured goods and other essentials of life. In May 1820, Congress appropriated funds to lay out the road from Wheeling to the Mississippi.

Construction in Ohio did not commence until 1825. Indiana's route was surveyed in 1827, with construction beginning in 1829. By 1834, the road extended across the entire state of Indiana, albeit in various stages of completeness. The road began to inch across Illinois in the early 1830s, but shortages of funds and national will, plus local squabbles about its destination, caused it to end in Vandalia rather than on the shore of the Mississippi River.

The major engineering marvels associated with the National Road may have been the bridges that carried it across rivers and streams. The bridges came in a wide variety of styles and types and were made of stone, wood, iron, and, later, steel. As the bridges indicate, an amazing variety of skills were needed to build the road: surveyors laid out the path; engineers oversaw construction; carpenters framed bridges; and masons cut and worked stones for bridges and milestones.

By the early 1800s, the National Road was a lifeline, bringing people and prosperity to the regions of the country removed from the eastern coast. First a Native American trail cutting through the mountains and valleys, and then a primitive wagon trail to the first federal highway, the National Road is surrounded by the views of pristine hardwood forests blanketing rolling hills, vintage homes and barns, historic farmlands, orchards, and hunting grounds.

Cities it runs through: Hopwood, Washington

Considerations: The colors of fall make it a great time to travel the Road. 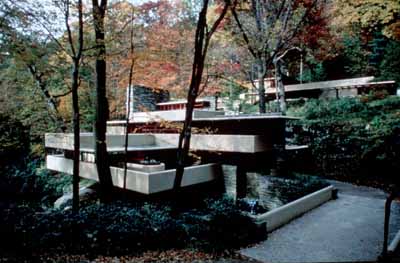 Frank Lloyd Wright's Fallingwater is one of the draws of Historic National Road.

The scenic qualities of Pennsylvania's Historic National Road can be described as a rich tapestry that changes with the seasons. Obvious reference can be made to the beauty of the budding leaves in the vast mountain woodlands, the lush green look of the trees and fields in summer, or the vibrant colors of autumn. Some of the real beauty, however, arrives with winter, with the starkness of the woods and barren trees.

One of the most amazing sights along the road occurs just after you climb the Summit Mountain traveling west from Farmington and Chalk Hill at the Historic Summit Inn. Just over the crest of that "hill," your eyes fall onto a vast, endless valley, with rolling hills and a lushness that makes you believe you have found the promised land. This breathtaking view beckons you to imagine the sense of jubilation pioneers must have felt after struggling to cross the Appalachians, realizing that the mountains were behind them as they began their final, steep descent down the western side.

This tour begins in picturesque Fallingwater and ends at the lovely Pennsylvania Trolley Museum.

Fallingwater: One of the most celebrated buildings of the 20th century, architect Frank Lloyd Wright's Fallingwater perches dramatically above a small waterfall on Bear Run. Completed in 1937 as a vacation retreat for the wealthy Kaufmann family of Pittsburgh, it aptly illustrates Wright's concept of "organic architecture"; that is, it was built to fit into the surrounding landscape of rocky, tree-shaded hillsides. Escorted tours reveal some of Wright's idiosyncrasies; he was short in height, so ceilings are low -- he designed to his own personal scale.

Kentuck Knob: Near Fallingwater, another wealthy family hired Wright. More modest in scope, their home sits high on a hillside hidden by trees as you drive onto the encircling 80-acre estate. From the outside, the house fits unobtrusively into its woodland setting, lacking the dazzle of Fallingwater. But the visual rewards, the magical spaces, are inside. The living room appears large, a look enhanced by a long wall of floor-to-ceiling windows. The ceiling is of polished wood, which reflects the light. In the evening, the glow is said to be very romantic. Though the house is luxurious, it boasts only a carport, not a garage. Wright, it seems, hated the clutter that a garage often generates.

Ohiopyle State Park: Just outside Fallingwater, Ohiopyle State Park and the village of Ohiopyle form a center for whitewater rafting and float trips. Several licensed outfitters offer trips of varying degrees of difficulty from gentle floats to daring, white-knuckle challenges. The outings take place on the Youghiogheny River -- the "Yock" -- which winds through the heavily forested state park.

Fort Necessity National Battlefield: Fort Necessity is the site of George Washington's only military surrender. Though the rebuilt fort is only a modest ring of stakes thrusting from the earth, it marks an important lesson for Washington that surely must have aided him two decades later in the American Revolution.

Braddock's Grave: A simple stone marker at Fort Necessity National Battlefield indicates the presumed gravesite of British General Edward Braddock. At the time of his death, he was commander of all British forces in North America. In 1755, a year after Washington's surrender to the French, Braddock led a snail's pace march against the French, who were instigating American Indian attacks on settlers from Britain's American colonies. Failing to heed Washington's advice on wilderness tactics, Braddock was fatally wounded. His army of 1,400 suffered 900 casualties.

Take your time and enjoy the Historic National Road, where the story of the road is told at information centers, explained at interpretive centers and lived at many interpretive sites.