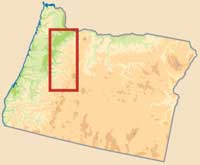 Oregon's West Cascades Scenic Byway isn't the shortest route between Portland and Eugene, but this 220-mile scenic alternative offers some of the best views of thundering waterfalls, lush ancient forests, rushing white water, and placid lakes. The byway ends near the timber towns of Westfir and Oakridge.

The northernmost access to the West Cascades Scenic Byway begins in the historic logging and hydropower city of Estacada, located only 40 minutes from Portland. From the very start, you're immersed in old-growth forest, skimming

the edge of the breathtaking Clackamas River. From here, the byway winds through the Western Cascades and its beautiful snowcapped volcanic peaks.

Although two segments of the West Cascades Scenic Byway -- Forest Roads 46 and 19 -- are closed in the winter due to snow, the rest of the byway offers access to a range of winter sports. These winter sport facilities range from the most rustic, primitive facilities to highly developed, full-service facilities.

Archaeological remains confirm human use of these lands 10,000 years ago. Previous native inhabitants include the Molalla, Kalapuya, Tenino, and Northern Paiute peoples.

Even though the West Cascades Scenic Byway has relatively few archaeological artifacts, the story of early inhabitants is told well through the byway's more soft archaeology: rich written and oral histories inter twined with scattered discoveries of tool caches.

For example, a famous oral history is tied with an old trail that formed a natural pass up the Santiam River. The legend says that a fierce battle between the Molalla (of the west hills) and the Paiutes (from the east side) took place on this trail. After the battle was over, the souls of the dead warriors waited to make war on old enemies along both sides of the trail. When settlers began to use the pass, they noticed that the Native Americans bypassed gorges along this trail where these souls were believed to be waiting.

Harder archaeological evidence shows that Native Americans hunted, fished, and gathered huckleberries and wild plants in the Santiam Basin at least 10,000 years ago. Gathering obsidian for their tools from the local Obsidian Cliffs, the tools they made (spear points and scraping tools) have been discovered in caches throughout the three major river basins.

Historical Qualities of the West Cascades

Early industrial companies and the Civilian Conservation Corps (CCC) both helped shape the West Cascades Scenic Byway as it is today. One such early industrial company that built structures along the route was the Portland General Electric Company (PGEC); the PGEC built a train bed in the 1920s that now serves as a portion of Highway 224.

Also, the logging and power companies practically built the city of Estacada, and they specifically left what is now Estacada's Timber Park, featuring a dam that boasts the longest fish tunnel in the Pacific Northwest.

Another company built the Hogg Railroad (now listed in the National Register of Historic Places) in the early 1900s, in an effort to connect the Willamette Valley with Eastern Oregon over the Santiam Pass.

In the 1930s, the CCC built many of the structures that are

West Cascades Scenic Byway's systems of mountains, vegetation, rivers, and wildlife support one another vitally. Wildlife thrives in the volcanic peaks and unique geologic formations of the High Cascades; it also flourishes in the Western Cascades' jagged lava flows and smooth glacial valleys. These ranges' old-growth forests of Douglas fir and western red cedar are excellent habitats for the northern spotted owl and the bald eagle (both endangered) and also for the pine marten, pileated woodpecker, Roosevelt elk, black-tailed deer, and mule deer.

The mountains' heavy snow and rain percolate through porous volcanic rocks and reappear as hundreds of springs that feed the byway's numerous rivers and lakes. These rivers support a number of rare and threatened species of fish, including spring chinook, winter and summer steelhead, bull trout, and a rare species of cutthroat trout. This abundant moisture has allowed the development of dense, lush old-growth forests: Some trees measure more than six feet in diameter and are more than 180 feet tall.

View Enlarged Image This map shows the points of interest along the West Cascades Scenic Byway.

A broad range of recreational activities is available along the West Cascades Scenic Byway. Summer brings horseback riding, picnicking, primitive and rustic camping, and fishing. You can also enjoy practically any water and watercraft activity: drift and motor boating, canoeing, jet skiing, sailing, water-skiing, kayaking, rafting, and swimming. The hiking here is especially good because the U.S. Forest Service maintains the byway's three national recreation trails to the highest standard. Hundreds of miles of other trails are also accessed from the byway.

In the winter, you can snowmobile, sled, snowshoe, and downhill and cross-country ski.

Considerations: Even though Forest Roads 19 and 46 are closed in the winter due to snow (from approximately November 15 to April 30), the rest of the route is open during winter months and provides access to cross-country skiing, snowmobiling, snowshoeing, and winter-only cabin rentals at Fish Lake Remount Depot. You need to buy a five-dollar day pass to access some of the park.