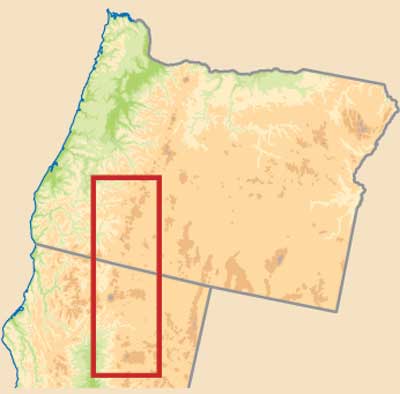 The Volcanic Legacy Scenic Byway stretches from California's Mount Lassen to Oregon's Crater Lake, making this byway America's volcano-to-volcano highway. The volcanic activity of the past has created unique geological formations, such as wavy lava flows and lava tube caves.

Surrounding this volcanic landscape is a wide diversity of scenery. The Volcanic Legacy Scenic Byway travels through or near dense forests, broad wetlands and habitat areas, pastoral grasslands, farms and ranches, and well-managed timber resource lands.

As the byway passes the 90,000 surface-acre Upper Klamath Lake, you can see more than one million birds during peak migrations in the fall. The Klamath Basin is the largest freshwater ecosystem west of the Great Lakes. Six national wildlife refuges in these wetlands were favorite fishing spots of President Theodore Roosevelt.

You can also visit the same Pelican Bay where John Muir (naturalist, writer, conservationist, and founder of the Sierra Club) wrote The Story of My Boyhood and Youth in 1908.

Let's discover even more about this volcano-to-volcano route, including what cultural treasures you'll uncover as you travel.

The Volcanic Legacy Scenic Byway was (and still is) littered with ancient Native American artifacts. Most of the artifacts that have been discovered along this route are displayed among the 100,000 artifacts in the byway's own Favell Museum of Western Art and Indian Artifacts. This museum focuses on the area's Native Americans but also spotlights nations across the country. It covers 12,000 years of history in its collections of basketry, beadwork, stone tools, and pottery.

Qualities of the Volcanic Legacy

The Klamath nations (more specifically, the Klamaths, Modocs, and Yahooskin) are an integral part of the communities along the byway because they lived here before anyone can remember. Also, the determination and grit they have demonstrated to survive the changes of years, famine, and new settlers have affected positively the attitudes of other groups who have lived in the area, including the groups who caused their setbacks.

to cattle ranching and made a profitable living.

And even though the nations were not federally recognized for about 30 years and had to work without supplemental human services on their reservation land, they have sustained the economy of Klamath County for decades; they contribute 12 million dollars per year to the Klamath County economy. They have also instituted training schools to make their enterprises more competitive.

Qualities of the Volcanic Legacy

Much of the historical significance of the Volcanic Legacy Scenic Byway arises from its Native American roots, and the byway is dotted with historic mining and logging towns. Many features along the byway are listed as historical landmarks.

Captain Jack's Stronghold, a national monument located in the Lava Beds National Monument, is historically significant because it was the site of the Modoc War.

From this secure base, Captain Jack and his group of 53 fighting men and their families held off U.S. Army forces, which numbered up to ten times more than Kintuashk's nation. However, the nation was still able to hold off the Army forces for five months.

Mount Shasta is another site of historical significance along this byway. The major history of the mountain lies in its geological greatness. It also has a spiritual history. Native Americans of the area believed Mount Shasta to be the abode of the Great Spirit. Out of respect, the natives never ascended past the timberline. A long history of mythology surrounds the mountain, including legends of Lemurians, Atlanteans, secret commonwealth citizens, dwarfs, fairies, Bigfoot, and space beings that materialize at will.

Mount Shasta draws visitors from all over the world, some seeking spiritual insight, others searching for the experience of the beauty and wonders that nature has to offer here in this unique alpine region. The upper elevation of Mount Shasta Wilderness was designated in 1976 as a National Natural Historic Landmark.

The Volcanic Legacy Scenic Byway is dotted with historic towns, many of which began as logging communities. McCloud is one example, being a company-built mill town, still revealing its colorful railroad and logging history.

The Heritage Junction Museum in the city offers exhibits displaying 100 years' worth of historical artifacts and photographs depicting the region. The still functioning McCloud Railway is also evidence of the logging history of the town. Likewise, the town of Weed was a logging town, built in 1897. The Weed Historic Lumber Town Museum helps to reveal the part Weed played in the logging industry of the time.

Other historical towns along the byway include Westwood, one of the largest company towns in the West during the early to mid-1900s, and Mount Shasta. Also, the Collier State Park and Logging Museum can give you an overview of the area's logging history.

Fort Klamath also tells an important story of early settlement. The fort was built in 1863 to protect Oregon Trail pioneers and southern emigrant trains from the nearby Modoc and Klamath nations who were inclined to attack on occasion. Two notable events happened at this fort: one was when Captain Jack was executed at the fort along with three other Modoc warriors in late 1873 (their graves are at the fort); the second was when the fort played an important part in the 1864 Council Grove peace treaty.

Crater Lake Lodge's historical guest register shows what a popular vacation spot Crater Lake has always been: It has hosted important visitors, such as First Lady Eleanor Roosevelt and author Jack London. It is listed on the National Register of Historic Places.

Unfortunately, not all of the history along the byway is bright. The Tule Lake Relocation Center was one of ten American concentration camps established during World War II to incarcerate 110,000 persons of Japanese ancestry. The majority of these people were American citizens.

A large monument of basalt rock and concrete along the north side of State Highway 139 commemorates the relocation center. The monument, dedicated in 1979, incorporates multiple levels of rock walls, a concrete apron, and a state historical marker.

In the spring, more than one million birds retreat there. This number is added to in the summer, as ducks and Canada geese join the throng. In the fall, the birds (ducks, geese, swans, and green-winged teal) number in the millions. In addition, the Klamath Basin is home to the largest concentration of wintering bald eagles in the lower 48 states.

The Volcanic Legacy Scenic Byway takes you around magnificent Mount Shasta, a solitary peak rising to a height of 14,162 feet. The byway allows you to experience the effects of the geological and volcanic history of the region.

It traverses two major geological areas. Lassen Volcanic National Park is located in the southern portion of the byway. The park contains Lassen Peak, one of the largest plug dome volcanoes in the world. Lassen Peak was a major source of the many geological formations of the area. Lava Beds National Monument, located along the northern part of the byway, near California's border with Oregon, is the site of the largest concentration of lava tube caves in the United States.

To finish this exciting volcano-to-volcano journey, continue north on Highway 97 to Crater Lake National Park. Crater Lake, Oregon's only national park, is not only a place for wildlife to refuge, but also is one of the nation's favorite places to retreat. The deepest lake in the United States, it was formed inside the collapsed peak of an ancient volcano, Mount Mazama, that erupted 8,000 years ago. The eruptions were 42 times greater than those of Mount St. Helens in 1980, and the ash spewed over eight states and three Canadian provinces. One of the finest and most accessible examples of a young caldera (a certain kind of volcanic crater) in the world, Crater Lake is recognized worldwide as a scenic wonder.

In the summer, you can fish, camp, visit a horse and cattle ranch, whitewater raft, or hike. You can tour a lighted lava tube or spelunk on your own at Lava Beds National Monument, see bubbling mud pots and steam vents at Lassen Volcanic National Park, or drive to an elevation of 7,900 feet on Mount Shasta to view the surrounding landscape. You can also tour the scenic shores of the Upper Klamath Canoe Trail by canoe.

Crater Lake National Park is especially good for camping and hiking. Lake of the Woods is popular for any kind of summer activity and is also great for winter activities, such as cross-country skiing (although cross-country skiing is exceptional in many other areas along the byway as well). Willamette Ski Lodge and Diamond Lake Resort are particularly good for downhill skiing.

States it runs through: California, Oregon

Considerations: The portion of the route from the south rim of Crater Lake to the North Park Entrance is closed from mid-October to mid-June each year due to snow. The roadway within Lassen Volcanic National Park is typically closed from November through June. The opening of Rim Drive each year is a locally celebrated event that signals the beginning of summer. Views of Crater Lake are available year-round at the south rim near the visitor facilities. The geometry of the Volcanic Legacy Scenic Byway makes it restrictive with respect to large vehicles, including RVs and tour buses.