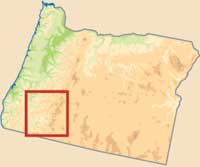 The Rogue-Umpqua Scenic Byway ventures deep into the Cascades. About 18 miles east of Roseburg, the North Umpqua River meets with the Little River at Colliding Rivers, one of the few places in the world where this head-on phenomenon occurs. The North Umpqua provides whitewater thrills and superb steelhead runs as it tumbles through the Umpqua National Forest.

Whether you're learning about the rich history of the Native Americans, stretching in front of a tranquil lake, or experiencing the rush of white-water rafting on the river known as the "emerald jewel" of Oregon, the Rogue-Umpqua Scenic Byway shares one of the state's best-loved areas with you.

Qualities of the Rogue-Umpaqua Scenic Byway

The North Umpqua and Rogue Rivers flow through this valley that was inhabited by prehistoric people for more than 8,000 years. Many dating techniques, such as radiocarbon and stratigraphic dating, indicate prehistoric occupations prior to the eruption of the volcano Mount Mazama, approximately 6,800 years ago. The presence of time-sensitive artifacts shows that occupation may go as far back as 12,500 years.

The route encompasses lands once occupied by the ancestors of the Upland Takelma, Southern Molalla, Klamath, and Cow Creek Bands of the Umpqua and Upper Umpqua Rivers. Along the route, interpretative panels are offered at the Colliding Rivers site at Glide, representing an Upper Umpqua village site.

There is also a recorded prehistoric fishing locality that is located at the Narrows near Idleyld Park. The Susan Creek Recreation Sites contain cairns, which represent vision questing. A trail provides access to the sites, and an interpretive panel gives information on the sites.

The nature and habitation of the valley changed with the eruption of Mount Mazama. When the volcano erupted, the Upper North Umpqua and Rogue River drainages were covered with a layer of airborne ash as far downstream as Dry Creek on the Umpqua and Elk Creek on the Rogue. A cloud of superheated gas and ash flowed across Diamond Lake and down the North Umpqua River to the Toketee Falls area and down the Rogue River toward Prospect, denuding the forest and destroying whatever plant and animal life happened to be in the way.

Subsequent floods carried ash and pumice farther downstream, blanketing terraces. Drainages were choked with ash, and their gravel beds became silted over, altering fish habitat. This cataclysmic event forced early inhabitants to adapt to their new surroundings, and archaeological sites within the Rogue and Umpqua corridors preserve a record of these adaptations, including alterations in clothing, food, and hunting techniques.

Qualities of the Rogue-Umpaqua Scenic Byway

Early settlers to the Rogue-Umpqua Scenic Byway laid a foundation for life in this rugged landscape. The Fort Klamath military wagon road made its way over the formidable Cascades to the settlement of Union Creek. The city doesn't remain today, but the wagon trail was an important trail to get settlers and supplies over the mountains.

In the 1850s, the Siskiyou Mountains in the Rogue River National Forest became home to many prospectors who were searching for gold. In the early days of the byway, American Indians, trappers, traders, explorers, and settlers all made their way into the surrounding area and worked or settled there.

The Civilian Conservation Corps (CCC) further developed the area surrounding the byway during the 1930s. This organization provided work for thousands of people during a time of low employment.

The CCC was responsible for a variety of projects, including reforestation, fire prevention, soil conservation, and development of recreational areas. Many structures that stand today along the byway are a legacy to the CCC.

Stretching across the river near Steamboat is the historic Mott Bridge, a recognized Oregon Historic Civil Engineering Landmark. Constructed by the CCC during 1935 and 1936, the Mott Bridge is the only surviving example of three such structures built at that time in the Pacific Northwest.

Fisheries play an important role in the ecosystem. The spring-fed rivers flow large amounts of freshwater and support nationally significant fisheries of steelhead and salmon.

The Upper Rogue and North Umpqua Rivers sustain critical habitats for a variety of resident and migrating fish species, including summer and winter steelhead, fall and spring chinook, coho, and sea-run cutthroat. These rivers and others provide large and consistent numbers of native (non-hatchery) fish in the run.

In 1997, following the listing of the Umpqua River cutthroat trout as an endangered species, fishing for trout in the mainstream Umpqua and tributaries was prohibited. Additionally, all wild steelhead and coho salmon caught in the North Umpqua River must be released.

Two fish hatcheries are also associated with the Rogue-Umpqua Scenic Byway. Located at the base of Lost Creek Dam on the Rogue River, the Cole M. Rivers Fish Hatchery is the largest hatchery on the West Coast, built in 1973 to mitigate for a lost spawning area when three dams were constructed in the Rogue Valley.

The Rock Creek Fish Hatchery, built in lower Rock Creek and 1/2 mile from Highway 138, was constructed in the late 1800s. It still operates to supplement the summer steelhead, spring chinook, and coho fisheries of the Umpqua, the North Umpqua, and South Umpqua Rivers.

View Enlarged Image This map details the points of interest on the Rogue-Umpaqua Scenic Byway.

Many come to fish, hike, camp, bike, and soak in the sites. However, the recreational opportunity that's most popular here is white-water rafting, an exhilarating experience that brings people back each year because of its world-class fun. The 33.8-mile North Umpqua River recreation area offers white-water thrills, including rapids of intermediate to advanced experience levels.

For the days not spent braving the rapids, Joseph H. Stewart State Park on Lost Creek Reservoir is a water paradise, providing 151 campsites with electrical hook-ups; 50 tent sites with water; two group tent camping areas with the amenities of flush toilets, showers, and volleyball and horseshoe pits; and day-use picnic areas. The boating facilities include a marina with a store and cafe, moorage facility, boat launch, boat rentals, and fish-cleaning facilities.

You can also find several other recreation sites on the 30 miles of shoreline created by Lost Creek Reservoir, including McGregor Park, a visitor center called Spirit of the Rogue Nature Center, Takelma Recreation Area, and the Cole M. Rivers Fish Hatchery.

Considerations: It's best to drive the Rogue-Umpque Scenic Byway during the summer and fall; fall colors are particularly spectacular along this byway. Check your car's fuel level often. Gas stations are few and far between. Also, during the winter months, the roads may be dangerous.