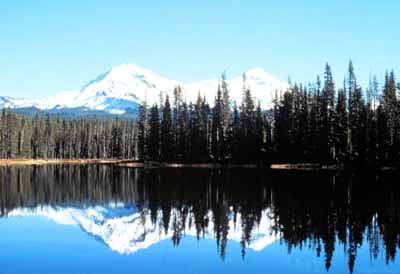 The North and Middle Sisters can be seen beyond Scott Lake from the McKenzie/Santiam Pass Scenic Byway.

The view of the Three Sisters and Broken Top Mountains from the McKenzie/Santiam Pass Scenic Byway represents the greatest concentration of snowcapped volcanoes with glaciers in the lower 48 states. In addition, the panoramic view of lava fields, six Cascade peaks, and lakes from the summit of McKenzie Pass is breathtaking.

If you're heading west from Eugene/Springfield, begin the byway at the junction of historic Highway 242 and Highway 126. If you're arriving from the east, access the byway from Sisters, a lively town chock-full of arts and crafts offerings and special events.

Junction Highway 126 and 242: Turn right to travel to 242, the McKenzie Pass Route. The forest along the byway on this portion is dark green, characterized by water-loving species such as hemlocks, cedars, and firs. The climb eastward is through a thickly vegetated, narrow corridor. Here, the road meanders, and travel is slow.

Proxy Falls Trailhead: To take in the beauty of both falls, spend about an hour to hike the 1-1/4-mile trail into the Three Sisters Wilderness.

Scott Road Historical Marker/Pull-Off: Open views of the Three Sisters Mountains -- originally named Faith, Hope, and Charity in the 1840s -- lie to the east. The Scott Road was really a settler trail named after Felix Scott, Jr. (1829-1879), who pioneered a wagon trail/road over the Cascades northeast of McKenzie Bridge. This route, part of which is a maintained trail into the Three Sisters Wilderness, proved to be almost impassible for wagons.

Dee Wright Observatory: Plan on an hour to tour the observatory and walk the 1/2-mile Lava River Trail.

Windy Point Viewpoint: At an elevation of 4,909 feet, Windy Point offers a picturesque view of the lava flows and volcanic peaks. Although little vegetation grows on the lava fields, as you make your descent from the summit of the McKenzie Pass, a mixed conifer forest returns, eventually giving way to ponderosa pines at the lower elevation.

East Portal and Sisters: The Santiam Pass Route begins at the Sisters Portal, heading north at the junction of Highway 126/20 and 242.

: Black Butte is the prominent composite cone north of the highway. Black Butte is older than many of the dissected High Cascade peaks. The U.S. Forest Service still operates a lookout on the top.

Mount Washington Viewpoint: For a quick stop, this roadside pull-off offers a spectacular view of the volcanic peak and basin.

Sahalie Falls : The McKenzie River surges over a 70-foot-high basalt cliff called Koosah Falls. From here you can hike for an hour on the Waterfalls Loop trail that connects this site with Sahalie Falls (or drive to the site).

How could you pass up a drive like this? Get packing today, and point your car in the direction of the the McKenzie/Santiam Pass Scenic Byway.

The Santiam Wagon Road, which once served as a dominant access route over the Cascade Mountains to the Willamette Valley, operated from 1865 until 1939. A segment of this road traverses the Fish Lake Historic Remount Depot on Highway 126, an early roadhouse for wagon road travelers, where lodging, food, and hay were purchased for less than one dollar in 1890. Today, vintage pre-1940 vehicles and horse-drawn wagons can travel from here to Tombstone Pass by permit.