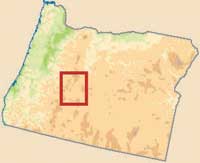 The Cascade Lakes Scenic Byway climbs into the Deschutes National Forest, where fishing, hiking, rafting, and other outdoor sports are plentiful. This area is also a winter playground; for example, Mount Bachelor Ski and Summer Resort is filled with snow through June.

As you drive by many bodies of water along the route, it is easy to see why this route was named after the Cascade Lakes. Some of the lakes that you encounter include Todd Lake, Sparks Lake, Cultus Lake, and Crane Prairie Reservoir.

As you can imagine, this is an angler's paradise. Anglers can spend hours at the banks of these lakes, fishing for Atlantic salmon and other freshwater fish. Waterfowl and many species of plants thrive here as well.

The history of how this area was formed is preserved at the High Desert Museum, along with displays and artifacts of the area's Native Americans and original cowboys. Also on display are remakes of prehistoric dwellings.

This same scenic drive was once traveled by early mountain explorers Kit Carson, John C. Fremont, and Nathaniel J. Wyeth. In the days of horse and buggy, this was a well-worn 100-mile dirt road called the Century Drive.

The Lava River Cave, Oregon's longest uncollapsed lava tube, tells the tale of the area's once-active volcanic past. However, it is closed during winter months, and warm clothing is

advised when touring the other times of the year. The Lava Lands Visitor Center and Lava Butte also supply good sources of information on volcanic cones and formations.

The geology of the Cascade Lakes Scenic Byway is especially significant. The volcanic Cascade Mountains (unique to the Pacific Northwest) are part of the Ring of Fire volcanic mountain chain that borders the Pacific Ocean. Nowhere else in the country (and possibly in the world) is there ready access to such a great diversity of volcanic features.

You can see stratovolcanoes, shield volcanoes, cinder cones, sheets of pumice and ash, sheets of ashflow tuffs, maars, caves, and several kinds of lava flows and domes. Volcanism and glaciation formed more than 150 small and large lakes for which this region is well known.

This area is also featured in geology textbooks and was used as a training ground for the Apollo moon missions in the 1960s. In 1971, astronaut Jim Irwin (aboard Apollo 15) placed a rock from Devil's Lake (a lake along this byway) on the lunar surface -- the only Earth rock on the moon!

The Cascade Lakes Scenic Byway also traverses through the drier forests that include lodgepole pine and older ponderosa pine. And 262 species of birds and animals reside here, including two threatened species: the bald eagle and the northern spotted owl.

View Enlarged Image This map will guide you along Cascade Lakes Scenic Byway.

You'll find many recreational activities along the Cascade Lakes Scenic Byway. Due to elevation differences and compact geography, six months out of the year you can ski in the morning and hike, fish, bicycle, or kayak in the afternoon.

Cities it runs through: Bend

Considerations: The best time of year to drive the Cascade Lakes Scenic Byway is from June through October. Winter snowfall closes a portion of the byway from mid-November until late May each year. When parking for more than a few hours near trailhead markers, expect to obtain a permit and pay parking fees.