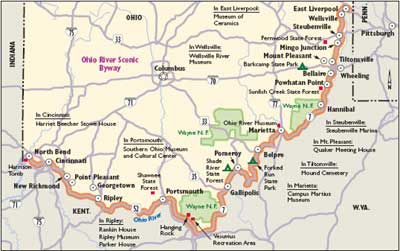 The Ohio River Scenic Byway follows the Ohio River, so you can enjoy majestic river views for the entire drive. The Ohio River is a historical American icon. Native Americans and early European settlers used it heavily, especially to access the West. It marked the boundary between the North and South during the slavery era and was later the gateway to freedom for many slaves. The river was also the means of progress for industrialists and merchants.

Several archaeological sites and museums are found along the Ohio River Scenic Byway. These include several Native American cultural sites in Tiltonsville, as well as the Mound Cemetery.

The town of Portsmouth, which hosts the Southern Ohio Museum and Cultural Center, is where many travelers learn about the history of this area. There are also Native American cultural sites near here.

The Ohio River has been a center of human activity for centuries and, therefore, is a cultural hotbed. Academic and historical organizations recognize this fact and have made the river and the immediate area the focus of their cultural studies. One such organization is the University of Kentucky's Ohio River Valley Series. This intercollegiate project specifically studies how the state's history has been affected by the social use of the Ohio River.

The region's rich history includes the migration of people along the river into the states that border it, as well as the those states that are located within the river's basin. The industry and technology of the area were important to the river as well. They changed the river's influence on the region through the development of steamboat travel and shipping, the creation of locks and dams, the establishment of industries such as steel and coal plants and their associated landing docks, and the development of large chemical and electrical power generating facilities.

This byway contains many natural features that surround both the Ohio River and the forests along the byway. Many native animals and plants add to the scenic quality of the byway. Natural sites along the byway include Fernwood State Forest, located near the Mingo Junction on State Route 151; the Quaker Meeting House, located near Mount Pleasant on State Route 647; and Bark-camp State Park. This park has historical significance and is located by a lake just off the byway turning from Bellaire on State Route 149. Campsites are available.

Several state forests and parks along this byway offer opportunities for outdoor recreation. Camping is available at the Bark-camp State Park, in the Forked Run State Park near Belpre, and in the Shawnee State Forest near Portsmouth. The Wayne National Forest begins near the town of Gallipolis and ends near Hanging Rock along the byway. You can camp at the Vesuvius Recreation Area in the forest as well.

Considerations: Although flooding along the Ohio River is a rare event, it is most likely to occur between November and April, and the byway route could be affected. In addition, short sections along the route may experience annual or biannual flooding, including the portion of U.S. 52 east of Cincinnati known as Eastern Avenue. Snowstorms are possible, particularly from mid-December through mid-March, and can cause road closures.