The construction of the Ohio and Erie Canal in 1825 drastically changed the people and pace of this region, as did the Canalway Scenic Byway. Many byway visitors travel this route to learn about the development of the pre- and post-canal eras. The route also offers an impressive display of historical sites, along with many opportunities for hiking, biking, and water sports.

The CanalWay Ohio Scenic Byway boasts more than 500 archaeological sites; seven are listed on the National Register of Historic Places. One site, Irishtown Bend, is located in Cleveland Flats. This is where an early settlement of Irish canal workers lived. While visitors can't see very much at this site because the house foundations that have been semi-excavated have been covered up for protection, the findings at this site are significant.

The influences on area culture can be classified into four elements: the resilience of farming communities, life during the canal period, the gumption of immigrants, and the accomplishments of wealthy industrialists.

Farming is still important to area culture, and the strength of past and present farmers is reflected in the sturdiness of the farms themselves: Many farms from the mid-19th century are still standing and working. The village of Zoar, which was founded in 1817 by a German religious sect, the Zoarites, is still working according to many of its old agricultural practices.

The sway of the canal era on area culture is apparent because its flavor is still potent in the historic cities of Clinton, Canal Fulton, Boston, and Peninsula.

The neighborhoods that immigrants developed retain their special foreign flavor, creating small pockets of spice along the byway. These National Register historic neighborhoods near Cleveland are based on Archwood-Dennison Avenue, Broadway Avenue, Ohio City, and Warszawa.

The ambitions of early wealthy industrialists are represented in the homes they built. Some of the more notable are the Stan Hywet Hall (Goodyear Rubber Company founder Frank A. Seiberling's home) and the Anna Dean Farm (Diamond Match founder O. C. Barber's estate).

Replete with continuous high-culture events, the larger cities on the route (Cleveland, Akron, Barberton, and Strongsville) retain several historic and well-known venues. The area's culture is manifested in locally produced festivals and entertainment.

People have lived in the CanalWay Ohio area for nearly 12,000 years. The area was an important transportation route for American Indians, and it was deemed neutral territory so that all might travel safely from the cold waters of the Great Lakes to warmer southern waters. European explorers and trappers arrived in the 17th century, and immigrants slowly moved in to farm over the centuries. The modern catalyst for area development was the Ohio and Erie Canal, which gave way to the area's industrial era. The CanalWay Ohio Scenic Byway takes you through places that still show evidence of the early inhabitants and the effects of industrial development.

The countryside north of Dover consists of wooded ravines and hillsides. It is separated by tilled croplands and isolated farms. This setup comes from early settlement of the Pennsylvania Germans and the Moravians.

The newly constructed Indigo Lake Visitor Shelter is a stop on the old railroad. Here, visitors can fish in the adjacent lake, access the canal towpath, or walk to Hale Farm. This farm is a 19th-century farm, presented to visitors through a full program of living history.

Towns such as Dover, Bolivar, Navarre, Barberton, Canal Fulton, and Clinton show the influence of the canal with their early 19thcentury architecture, original canal-oriented street patterns, locks and spillways, and towpath trails along the historic canal route. Tours on the St. Helena III Canal Boat in Canal Fulton give visitors firsthand experience of canal life. The Canal Visitors Center is housed in an 1852 canal tavern.

Waters from the area's lakes provided the cooling needed for the industrial rubber boom, which created the prosperous Akron of the 1920s. Brick factories illustrate life in industrial-era Akron.

The CanalWay Ohio Scenic Byway is a biological crossroad because it transects three regions: lake plains, glaciated plateau, and unglaciated plateau. This results in a great diversity of plants and animals, textbook examples of forest communities and habitats.

The primary trees in the glaciated plateau region are beech-maple (the most common), oak-hickory, and hemlock-beech. Ice Age hemlock-beech forests are found in ravines, while oak-hickories are found atop ridges and in drier areas. The Tinkers Creek Gorge National Landmark has a rare settlement of hemlock-beech on the moist valley floor.

Rolling hills and steep valleys characterize the unglaciated plateau region. Oak-hickory is common in this southern part of the route. Many of these lands are held and preserved by public agencies.

There is plenty to do along the CanalWay Ohio Scenic Byway. Towpath Trail near the Ohio and Erie Canal is extremely popular; more than three million users enjoy the trail in a typical year. Other recreation includes skiing, golfing, picnicking, hiking, fishing, and boating, and water excursions are available along the rivers as well. Also, the route passes through several entertainment districts.

Considerations: Riverview Road in south Cuyahoga County is occasionally closed due to flooding. This happens only during major storms and does not last for very long. Fort Laurens, Towpath, and Dover Zoar Roads also lie in the flood path. 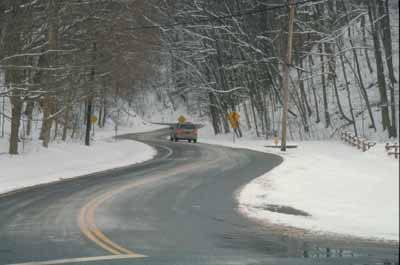 Canalway Ohio scenic byway is a lovely drive during all seasons.

The scenery found along the CanalWay Ohio Scenic Byway is interestingly diverse. It ranges from the heavy industry of the Cleveland Flats (and the resulting immigrant neighborhoods) to rolling hills and farmland. You can also see the remnants of the towns and villages associated with the canal, as well as samples of 200-year-old architecture.

This itinerary takes you through Cuyahoga Valley National Park and into Akron. Although it does not cover the entire distance of the byway, it gives you a taste of how you can drive a portion of this road.

Cuyahoga Valley National Park: Start with a dawn picnic breakfast at the Cuyahoga Valley National Park (CVNP). The CVNP is on the byway, and its entrance is about eight miles south of Cleveland. In this gorgeous 33,000-acre region, you can do just about anything outdoorsy (hiking, golfing, bicycling, horseback riding, and so on). Admittance is free. After breakfast, go biking along the Towpath Trail, which runs through the park for about 44 miles; historical structures, canal locks, and wayside exhibits are added features of this trail. Take an hour or two to enjoy a bike ride along any part of the trail.

Hale Farm: For another two (or three) hours before lunch, stop at Hale Farm, which is at the southern end of the CVNP. There is an admittance fee for this living-history farm, where you can wander the grounds and talk to the artisans who make the impressive wares for sale there. The glass blowers, candlemakers, potters, and blacksmiths demonstrate the industries of the mid-1800s. The buildings and history here are fascinating. Eat lunch and head south to Akron.

Akron: Akron is a buzzing city with much to do. One possibility is to stop at the Akron Art Museum. Admission and parking here are free for visitors, and the museum always has engaging exhibits.

Cascade Locks Park: After your visit at the museum, go to the Cascade Locks Park (also in Akron). Admittance is free here as well. This park has 15 canal locks in a one-mile stretch (all necessary to climb over the Continental Divide), and you can follow them along on a trail; signs along the trail explain the locks and the history of the canal. There are also two historic buildings to visit in this park.

The story of immigrant life, industrialization, and American innovation can be told along the CanalWay Ohio Scenic Byway.