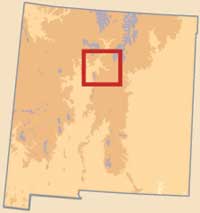 Back roads often lead to glorious scenery and great discovery, and so it is with the Turquoise Trail. When you leave the freeway and venture onto the scenic and historic Turquoise Trail, you get a chance to see 15,000 square miles of central New Mexico from a bird's-eye view atop Sandia Peak, the magnificent summit of the Sandia Mountains that rises 10,378 feet. From here, you can venture into Sandia Mountain Wilderness and hike through aspen glades and across flowering meadows, coming upon one spectacular view after another.

You can also visit the ghost mining towns of Golden, Madrid, and Cerrillos, towns now with great arts, crafts, theater, music, museums, and restaurants. In addition, the Museum of Archaeology and Material Culture in Cedar Crest exhibits a 12,000-year timeline that tells the story of North America's earliest inhabitants and goes chronologically through history until the Battle of Wounded Knee in 1890.

Archaeological Qualities of the Turquoise Trail

Over thousands of years, many people have inhabited the area along the Turquoise Trail. Pottery shards, ancient mining quarries, and pueblos are just some of the evidence ancient inhabitants left behind. Prehistoric Native Americans relied on many features of the area for their economy, such as the rich deposits of turquoise and local lead, which were used for decoration and glazes in their pottery.

The Tijeras Pueblo, an archaeological site located near the ranger station of the Cibola National Forest, once housed several hundred people. These people lived in the area more than 600 years ago.

The San Marcos Pueblo offers limited tours (by appointment) and serves as a research site that provides archaeological field experience for students at the University of New Mexico. Many adobe and masonry pueblo structures remain intact at the San Marcos site, and estimates are that the pueblo had between 3,000 and 5,000 rooms. During the 1300s and mid-1400s, the pueblo was also a center for pottery making.

One of the oldest dwellings in the area may be Sandia Cave. Evidence surrounding the cave's earliest occupants remains controversial, but excavations from the cave suggest that people lived in the cave during three different time periods. Pre-Colombian Pueblo-style artifacts; hearths and tools of nomadic hunters; and Folsom spear points used on bison, giant sloths, and horses have all been found in the cave.

The early pueblo inhabitants of the area surrounding what is known today as Cerrillos Hills Historic Park worked on many turquoise pits, quarries, lead (galena) mines, refining areas, workshops, hearths, and campsites. Most of the activity here occurred between A.D. 1375 and 1500, but grooved axes, mauls, picks, and American Indian pottery are all that is left. These mines were critically important to the people in the area because they supplied valuable turquoise that allowed decoration of pottery, jewelry, and other items.

Cultural Qualities of the Turquoise Trail

New Mexico's vibrant history has permeated modern society and left cultural treasures throughout the area. Retaining the flavor of the Southwest, local artisans have saved several of the region's ghost towns and transformed them into artistic communities.

Along the Turquoise Trail, you will find shops and galleries filled with paintings, sculpture, pottery, leather goods, jewelry, furniture, beadwork, toys, art wear, and antiques. Some of the old company stores and houses have also been refurbished as restaurants and bed-and-breakfasts.

Qualities of the Turquoise Trail

Native Americans were the first people to extract gold, silver, lead, zinc, and turquoise from the hills. Indeed, the turquoise found near the Turquoise Trail is considered by some to be the finest in the world. Usually sky blue to light greenish blue, turquoise can also be white, dark blue, jade green, reddish brown, and even violet. In the early 1900s, Tiffany's of New York helped to popularize the shade known as robin's egg blue.

When the Native Americans began their mining efforts, the mineral deposits were in pure veins. Early digging implements included stone hammers, chisels, and files. After the minerals had been removed, the native miners would carry the ore and rock outside the mine in reed baskets or buckets made of hide. Spanish explorers estimated that native miners had removed 100,000 tons of rock, based on huge tailing piles and 400-year-old pinon trees growing from the piles.

Although some mining occurred during Spain's (and later Mexico's) ownership of the land, the majority of mining appears to have been done during the territorial expansion of the United States.

Golden began with humble beginnings during the 1825 gold rush, the first gold rush to occur west of the Mississippi. Here, two mining camps were created to mine placer gold (gold extracted from streams or rivers). In 1880, several mining companies moved into the area and renamed the two camps "Golden" to match their high hopes of profiting. However, these hopes faded by 1884, and the population of Golden steadily decreased.

Another popular New Mexico mining community, Cerrillos, hit its peak in the 1880s, due in part to the arrival of the railroad. The early 1880s quickly expanded the local mines, with more than 2,000 land claims filed on only a few square miles of land.

Madrid was founded in the oldest coal-mining region of the state and gradually grew to become the center of the coalmining industry for the region. Under the direction of the superintendent of mines, employees were to donate from 50 cents to one dollar a month for community causes and were also required to participate in town events such as the Fourth of July celebrations and Christmas light displays. In fact, Madrid became famous for its Christmas light displays.

However, the town's Christmas celebrations ended in 1941 with the start of World War II. Eventually, people began choosing natural gas in favor of coal, and the mines near Madrid closed in the early 1950s, causing the town to be abandoned.

Natural Qualities of the Turquoise Trail

Proud of its natural legacy, New Mexico has preserved many vibrant natural wonders that can be easily accessed along the Turquoise Trail. In the byway's short length of 61 miles, you're whisked through forests and mountains that are home to a dazzling array of wildlife. Depending on the terrain, you can observe desert wildlife or woodland creatures. Many of these animals make their homes among the juniper, pine, and spruce-fir forests.

But the natural treasures on the Turquoise Trail began forming millions of years before roads were constructed anywhere in the area. Between 24 and 34 million years ago, the Cerrillos and Ortiz Mountains along the Turquoise Trail were dikes, or branches, of magma that solidified thousands of feet underground.

By the time early Native Americans began to settle these areas, these dikes were exposed and began to crack. This erosion process soon made the area famous for its rich supply of minerals, including gold, silver, lead, zinc, coal, and a wide assortment of turquoise. Today, fossil hunters sift through the outcroppings of shale, hoping to find one of the many fossils of prehistoric life hidden there.

Part of the byway travels into the Cibola National Forest. Here, the climate varies with elevation, which ranges from 5,000 to more than 11,300 feet. Snow can be found in the timberline until June, and some of the higher elevations become very cold at night.

The high points of a visit to the Turquoise Trail, however, are Sandia Peak and the Sandia Mountain Wilderness, which offer a view of the sublime. Long considered sacred by some Native Americans, they provide a welcomed respite.

Follow this map of the Turquoise Trail to see the range of terrain in New Mexico, from colorful deserts to the Sandia Mountains.

Recreational Qualities of the Turquoise Trail

The Turquoise Trail has numerous opportunities to enjoy recreation. Built in 1966, the Sandia Peak Tramway is the longest continuous jigback tram in the world, which means it has one car going up while another is coming down, and it has the third longest clear span in the world. It is the only place in the United States where visitors traveling on an artificial transportation system are virtually surrounded by a nationally designated wilderness area.

The pristine Sandia Mountain Wilderness is a natural, scenic, and recreational wonder located adjacent to metropolitan Albuquerque. More than 100 miles of recreational trails in the wilderness area offer a wide variety of terrain.

Considerations: If you're venturing into the mountains, take a coat or jacket. Snow may cause a chain rule and/or four-wheel-drive requirements to be in effect between October and March.

Highlights of the Turquoise Trail 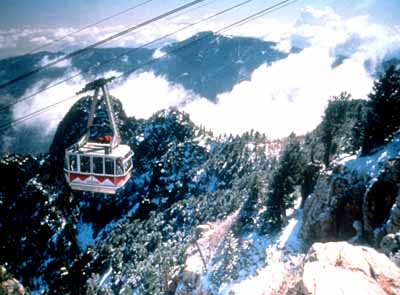 A highlight of the Turquoise Trail is the tram ride up to Sandia Peak where you can get a bird's eye view of the magnificent landscape below.

The Turquoise Trail offers many miles of unspoiled natural beauty. Mesas, deserts, and grasslands teem with wildlife and provide a home for horses, cattle, and even an occasional llama or ostrich.

A unique quality of the Turquoise Trail is the weather. The arid desert climate makes the scenic drive possible in all four seasons. During the summer months on the byway, you see fast-moving clouds and hundreds of lightning bolts electrifying the sky. In contrast to these wild storms, you may be inspired by the multicolored sunsets in a calm evening sky.

Some of the most enjoyable scenery found along the byway was created by humans. You can view tailings from historic coal mines, representing the only location in the nation where both anthracite and bituminous coal were found.

The best way to experience the nature of the Turquoise Trail is to stop at the small towns along the byway and speak with the folks who live there. Here's a sampling of places you may want to stop.

Tijeras Pueblo: Between 1948 and 1976, excavations in this area helped scientists learn about the Tijeras Pueblo, a large nation believed to have been in existence between A.D. 1300 and 1600. Many remains are on display at the Maxwell Museum of Anthropology at the University of New Mexico in Albuquerque. The pueblo itself includes 200 rooms, a dozen small buildings, and a kiva. After excavation was done, the area was covered again with soil to preserve it.

Sandia Peak Tramway: Continue north on 14 out of Tijeras, and turn left on Highway 536 heading toward Sandia Peak. While at Sandia Peak, be sure to stop at the Museum of Archaeology and Material Culture and the Tinkertown Museum. Continue on to the Sandia Peak Tramway. After the tram, continue to the highpoint of the road and take a quick tour of the Sandia Cave -- with your flashlight!

Madrid: Head back down Highway 536, turn left, and continue north on Highway 14. Drive toward Madrid. Expect to spend some time here enjoying the Old Coal Mine Museum and the Engine House Theatre. This town, after being deserted due to a mine shutdown, was listed for sale in the Wall Street Journal in 1954 for 250,000 dollars. No one bought it, but the town has been revived since the 1970s by artisans.

Cerrillos: Just north of Madrid and before Cerrillos, be on the lookout for a unique art display. Animal bones and glass are the tools of artist Tammy Jean Lange. A few miles up the road is Cerrillos. Thomas Edison is reported to have stayed here briefly while conducting studies with the area's minerals. The Cerrillos Turquoise Mining Museum is a special feature of the town. Don't leave Cerrillos without a stop at the What Not Shop.

From stunning views high atop Sandia Peak to quaint towns offering an array of unique artwork, the Turquoise Trail has it all.