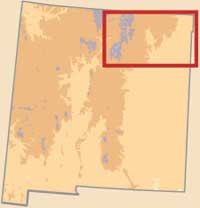 The Santa Fe Trail was the first of America's great trans-

Mississippi routes. The trail, including the Mountain and Cimarron routes, traversed more than 1,200 miles from Franklin, Missouri, to Santa Fe, New Mexico.

From 1821 to 1880, it was an important two-way avenue for commerce and cultural exchange among Spanish, American Indian, and American cultures. The area around the Santa Fe Trail boasts more than 20 historic districts and 30 individual sites that are recorded on the National Register of Historic Places.

The Santa Fe Trail offers many archaeological sites, including some with early excavations. From 1915 to 1927, Pecos was the subject of one of the first organized excavations of a Southwestern ruin.

Pioneer American archaeologist Alfred V. Kidder analyzed the stratigraphy (the sequence in which the archaeological remains of the pueblo were deposited). He noted changes in the artifacts, especially the pottery, from the lower, older layers of occupation through the upper, younger layers. Kidder used the relative ages of the pottery remains to establish relative dates of occupation at Pecos. Based on that information, he and his colleagues devised the Pecos Classification, a sequence of eight prehistoric cultural periods that applied to sites throughout the Southwest.

In 1965, Congress and the president authorized the establishment of Pecos National Monument. In the summer of 1966, National Park Service archaeologists began excavation of the church and convent; their findings not only cast new light on the history of the Southwest but also substantiated reports of 17th-century writers whose words had been held suspect.

Both the church and the convent were puzzling. The 17th-century ecclesiastics had described the church as being large, splendid, magnificent, and of unusual design, but the remaining adobe walls are of a church that had none of those characteristics. However, it was discovered that the convent was much larger than a church of modest size.

In the summer of 1967, the project archaeologist discovered stone foundations resting on bedrock and fragments of burned adobe walls. Under and around the ruins of the known church, further excavations uncovered the foundations of an earlier church that was nearly 170 feet long, 90 feet wide at the transept, and 39 feet wide inside the nave. The building was typical of the fortress churches of Mexico. It had bastioned nave walls and subsidiary chapels in thick-walled, cruciformlike (cross-shaped) arms near the sanctuary. Only 18 such structures were known in the Americas until the Pecos find, and none were north of Mexico City.

It is now clear that the large church and convent were constructed in the 1620s and later destroyed during the Pueblo Revolt of 1680. The convent was then reconstructed, and a new church was built following the Reconquest, probably in the early 1700s.

The archaeological survey now in progress is designed to locate small sites showing evidence of activities on which the Pecos livelihood was based. Evidence of agriculture field systems, including check dams, farming terraces, and overnight houses, has been uncovered. Rock art and hunting camps have also been identified, including Apache tipi ring sites that verify historical reports of Apache encampments for trade with the Pecos people. Some evidence suggests that the Pecos area may have been at least a marginal site for human occupation for several thousand years.

Recent excavations have uncovered two large semi-subterranean houses on the grassy flats south and west of monument headquarters. These pithouses, the first to be reported from the Upper Pecos River area, were built in the 9th century. They were probably part of a village that may have been occupied on a seasonal basis. The architecture is similar to that of both the Anasazi people of the Rio Grande Valley and the Mogollon of southern New Mexico.

The Santa Fe Trail was the first trail of commerce between the Southwest and the United States. From 1821 to 1880, the Santa Fe Trail was an important two-way avenue for commerce and cultural exchange among Spanish, Native American, and American cultures. You can see evidence of this abounding culture in many of the events and activities on the byway.

The Santa Fe Trail was the first international trade route, carrying needed materials from Missouri to northern Mexico and taking back silver, furs, mules, and wood to Missouri.

As early as the 1700s, Pueblo and Plains Indian trade fairs at Pecos and Taos introduced Spanish residents to native products. Yet trade between New Mexico and other settlements throughout the West was banned because New Mexico was a colony of Spain and could trade only with the mother country.

Beginning in 1810 and succeeding in 1821, uprisings in Mexico gave New Mexico freedom to trade with anyone. November 16, 1821, is recognized as the start of legal international trade between New Mexico and the United States; this date also marks the beginning of the Santa Fe Trail.

The Santa Fe Trail passed through the territories and ranges of many Native American nations, including the Pawnee, Arapaho, Cheyenne, Comanche, and the Kiowa, so American Indian traders used it as a commercial route.

After the Mexican War (1846-1848), the Jicarillas, Comanches, Kiowas, and other nations became increasingly threatened by the traffic on the trail. With the American promise to the people of New Mexico to subdue the various American Indian nations, an intermittent war began that ended in the mid-1870s. The American Indian nations of New Mexico were then confined to reservations.

After the Mexican War (and with New Mexico a U.S. Territory), the trail became mainly a military road. It supplied goods to the large contingent of troops in the Southwest, and mercantile goods were still carried into Mexico and New Mexico. After the Civil War, railroads began laying tracks to the West. By 1879, the first locomotive reached Las Vegas, New Mexico, and in 1880, the railroad reached Lamy, essentially ending wagon traffic across the 900 miles of plains.

The Santa Fe Trail offers an array of flora and fauna. Vegetation ranges from small pockets of tall grass prairies to the buffalo and blue grama grass found on the short grass plains east of the Sangre de Cristos Mountains.

South and east of Las Vegas, the trail enters the pinon pine and juniper vegetation zones as the elevation increases in the mountains. Antelopes, coyotes, elks, and bears are prevalent in the area. Bird life is profuse, including small mountain bluebirds, hawks, bald eagles, and golden eagles. Many species of reptiles also inhabit the area, including the prairie rattlesnake and the western diamondback rattlesnake.

From its easternmost point at Old Franklin, Missouri, the trail traveled west to Cimarron, Kansas, where it split into two routes. The original trail, the Cimarron Route, headed southwest across Colorado, Oklahoma, and New Mexico. The Mountain Route headed west into Colorado and then went south to New Mexico. The routes joined again at Watrous.

The Cimarron National Grassland near Elkhart, Kansas, contains 23 miles of the trail's Cimarron Route, the longest trail segment on public land. A 19-mile companion trail, a mowed swath across the prairie, parallels the actual trail route. Point of Rocks, a large outcropping of rock that rises above the prairie, was visible for long distances from both directions along the trail. Today, you can drive to the top to enjoy this view.

A short distance east of Point of Rocks is Middle Springs, a small oasis on the prairie where water rises from an ever-flowing artesian spring. It was the only reliable watering spot for 30 miles each way along the trail. This welcome resting spot along the trail now has a picnic area and walking trail for your enjoyment.

The winding ribbon of the Cimarron Route crosses the Kiowa National Grassland 15 miles north of Clayton, off Highway 406. Time, weather, and erosion have not erased the deep wagon ruts stretching across two miles of this grassland.

The Mountain Route coursed northwest after splitting from the main trail at Cimarron, Kansas. Along its length, it unraveled the Aubry Cutoff a few miles east of the Kansas/Colorado line and the Granada Fort Union Road just west of the state line.

As it continued its westward path, the Mountain Route curved to the north, tracing what is now Route 50. Here, the changing horizon from plains to mountains was a major milestone on the journey, surely causing great excitement among the travelers. The mountains may have also produced apprehension as travelers anticipated having to climb with heavily laden wagons.

You'll find many recreational activities along the Santa Fe Trail, including fishing, camping, skiing, mountain biking, and hiking. Several state parks and recreational areas are located in northeastern New Mexico. As a matter of fact, outdoor recreation is one of the top four reasons people visit New Mexico.

Considerations: The best time to drive the Santa Fe Trail is in the early spring through late fall.