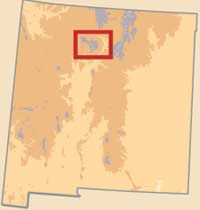 The Jemez (pronounced HAY-mez or HAY-mus) Mountain Trail is begins north of Albuquerque, near the unspoiled village of San Ysidro. San Ysidro is a village where you can find the work of local artisans and view the restored Spanish adobe church.

Many of these pueblos were established centuries ago; the Taos Pueblo, for example, is thought to have been continuously occupied for close to 1,000 years. Each pueblo has its own government, traditions, and ceremonies and is a sovereign and separate entity. The pueblos typically welcome visitors, especially during specific dances and feast days.

A people of great faith, the early Spanish settlers arrived in 1607 with scores of Catholic priests. Just as the Spanish created houses of worship from an adobe mix of mud and straw, they built villages and towns in the same architectural fashion.

Like adobe architecture, art forms practiced by early Spanish settlers were shaped largely from resources they found in their natural environment. Using native aspen and pine, paints derived from natural pigments, and other local materials, they created utilitarian goods and religious objects to adorn their homes and churches.

At first, the work echoed the traditional artworks and motifs they had carried with them to the New World from Mexico and Spain. But in time, native artisans developed styles and techniques that were unique to New Mexico alone. Ranging from santos (carved images of saints), furniture, and textiles to works in tin, iron, silver, and straw, the art of the Spanish colonial era remains the art of many Santa Fe-area families.

Meanwhile, other artists have carried their ancestors' legacy to new levels of excellence by working in more modern media, including sculpture, photography, painting, jewelry, and literature.

Jemez State Monument and Bandelier National Monument are popular places to discover more about the history of the area. Both monuments have exhibits and self-and ranger-guided tours.

You'll find many wonders along the Jemez Mountain Trail. For example, the history of the Jemez Mountains goes back one million years to a volcano's eruption. The eruption created an area of mountains, mesas, and canyons the size of a small eastern state.

Dominating the western half of the Santa Fe National Forest, the Jemez Mountains resemble a wagon wheel on a topographic map. The hub is formed by the giant Valles Caldera (a crater created by the volcano's violent explosion), and the spokes are made by the mesas built of volcanic tuft. Elevations in the range from 6,000 to 11,000 feet. One of the legacies of the volcano is the canyons' Swiss cheeselike rock cliffs and strange cone-shaped tent rocks.

The towering volcanic plug of Cabezon (meaning big head) is famous in Navajo folklore. The volcano has a trail leading to its 8,000-foot summit. In addition, one mile north of the Jemez State Monument at Soda Dam is an unusual geological formation where, over thousands of years, minerals from a natural spring have created a dam that blocks the Jemez River. The river pours through a hole in the dam, forming a waterfall. Soda Dam has become one of the most popular swimming holes in the Jemez Mountains.

Also along the byway is Battleship Rock, a sheer cliff that rises suddenly above the river like the prow of a ship. A few miles past Battleship Rock is the parking lot for Spence Hot Springs, an accessible and scenic place for a long soak in hot mineral waters.

For the adventurous, Battleship Rock in the Jemez Mountains provides challenging terrain and an intriguing landscape: The trail is covered in shiny black obsidian created from volcanic eruptions five million years ago.

Before you journey onto this trail, take a look at the next page for a suggested tour.

Considerations: Highway 126 is not paved and is generally closed in the winter due to snow. Different sections of the Jemez Mountain Trail have various accessibility and safety issues. Travelers should be aware of several fire precautions. Call any U.S. Forest Service Office for hazard updates.

Highlights of the Jemez Mountain Trail

Los Alamos: Your trip through the Jemez Mountains begins in Los Alamos, famous as the home of the Los Alamos National Laboratory for its work and historic role in the Manhattan Project and the development of the atomic bomb. The Bradbury Science Museum offers a great deal of information.

Valle Grande: After that, travel east and follow the signs to Valle Grande, the remains of a volcano that erupted 1.4 million years ago. Hot springs and recreational opportunities abound here.

Cuba: After Valle Grande, continue north to Highway 126. This road, all the way to Cuba, is not paved but is well traveled. However, a four-wheel-drive vehicle is recommended for better safety.

Cabezon: After a rest in Cuba, travel south along Interstate 550. A quick detour off of the byway heading west on 197 will take you to Cabezon, a ghost town that was a flourishing city until the 1940s. Back on Interstate 550, head south through the national forest and down toward the many American Indian pueblos. The Zia and Jemez Pueblos have wonderful opportunities for learning and adventure. (Note that the Jemez Pueblo is not open to the public, except on festival days.)

You're sure to be wowed by all the cultural, historic, and scenic wonders there is to discover along New Mexico's Jemez Mountain Trail.

Jemez Pueblo, about five miles from San Ysidro, is located at the gateway of the majestic Canon de San Diego. There are more than 3,000 Native Americans here, most of whom reside in a single Puebloan village known as walatowa -- the Towa word meaning "this is the place." Enjoy traditional Jemez foods and arts and crafts available at roadside stands in the beautiful Red Rocks area. Jemez Pueblo also offers recreation areas where you can picnic, fish, and enjoy the great outdoors.