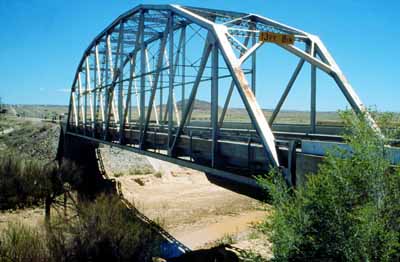 One of the sites you'll see as you take Historic Route 66 across New Mexico is this scenic bridge across the Rio Puerto.

Historic Route 66 is unique in that it embodies plains, grasslands, vistas, mountains, deserts, and virtually every kind of terrain available in New Mexico. The beautiful and varied desert landscape along the byway, coupled with unique Southwestern architecture, provides an exceptionally scenic drive. The sunsets and sunrises on the byway are spectacular, and you can see for miles in any direction in most places along the route.

Historic Route 66 is a truly amazing visual experience. Orange rock dotted with green plantlife rests dramatically against a turquoise-blue sky in summer, creating a postcardlike desert scene. Yet, a few miles down the road, a forest surrounds a bright blue lake, with a waterfall cascading down the dark rock. You'll often find this contrast in this unique geological area: Six of the seven life zones identified on Earth are found in New Mexico.

As you approach cities, you'll notice that the distinctive architecture of the cities also embodies Southwestern flavor. The stucco and brick buildings are often colorful and particular to the pueblo style. This style is apparent in the downtown shops, outdoor markets, and residential areas. Even new construction keeps the traditional style alive with colorful buildings of stucco and landscape of cacti and yucca.

Acoma Sky Pueblo: The first stop along this section is just south of McCarty's, off of exit 96. The Acoma Sky Pueblo offers a unique view worth seeing -- a city atop a 400-foot mesa. The people of the Acoma Pueblo ask that visitors respect the posted warnings and signs and be respectful of residents. Always ask permission to take photos.

Also, if you are fortunate to visit on a celebration day or during a dance, remember that dances are prayers and require concentration. Please do not talk to the dancers, walk on the dance plaza, or applaud when a dance ends.

Interpretive signs were placed at the site describing the cultural history of the Chacoan Anasazi and the features present at Casamero. The Bureau of Land Management restabilized Casamero Pueblo in 1986, replacing eroded mortar and loose stones. The Casamero Pueblo Ruins is fenced to keep livestock and vehicles from disturbing the site. A parking lot is provided along McKinley County Road 19 for visitors.

Gallup: The Route 66 Drive-In in Gallup makes a great stop for lunch in keeping with the theme of the drive. Don't forget the Red Rock Museum at Red Rock State Park, just east of Gallup. Also, while in Gallup, finish your trip along western Route 66 by inquiring about ongoing activities at the Gallup McKinley County Chamber of Commerce.

I-40: The modern Route 66 is essentially Interstate 40, although it detours slightly through Tucumcari and Santa Rosa. This section caused quite a lot of trouble back in the early days of Route 66, when the road was narrow and dangerous. This 40-mile stretch of road heading into Tucumcari was poorly maintained and was full of potholes. Driving long hours through this flat countryside often caused motorists to doze off; hitting an unexpected pothole would cause them to lose control. Many people died in collisions on this narrow road. In fact, some of the older residents in the area will tell you that there were "only six inches and a cigarette paper between you and death on 66." Today, I-40 is wider, safer, and well maintained.

Tucumcari: Once in Tucumcari, take exit 335 into town. Historic Route 66 continues along Tucumcari Boulevard. While in Tucumcari, you can easily spend the day shopping or visiting the Blue Swallow Motel (one of the oldest motels in town and one of the most famous along Route 66), Mesalands Dinosaur Museum, and Tucumcari Historical Museum.

Conchas Lake State Park: At the end of Tucumcari Boulevard, you can choose one of two routes. This tour takes you north on Route 54 toward Conchas home to Conchas Lake State Park, one of New Mexico's largest lakes. The park has a wide variety of water activities, and onshore exploring offers the potential of finding ancient rock formations and American Indian dwellings.

Santa Rosa: Heading farther west along I-40, you pass through Cuervo, and head on to Santa Rosa. The Route 66 Auto Museum is a must-stop for anyone taking in the true spirit of Route 66. The more adventurous will most likely enjoy a dip at Blue Hole, an 81-foot deep clear, natural artesian spring famous for its scuba diving opportunities. A stop at nearby Santa Rosa Lake State Park and Sumner Lake State Park will give the recreationally minded plenty of choices.

Capture the character of Route 66 by traveling along this historic portion of it in New Mexico. With scenery that can't be beat and some interesting cultural and historical tidbits along the way, this is a drive you'll never forget.