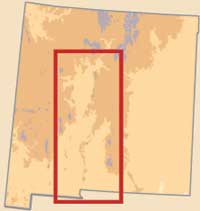 El Camino Real is one of the most important historic trails in New Mexico. It is not only the first European road in what is now the United States, but for many years it was also the longest road in North America.

The northern portions of El Camino Real followed the Rio Grande Pueblo Indian Trail, which existed for centuries before the Spanish explorers arrived. The land along El Camino Real has been a meeting ground of peoples and a haven of cultural diversity through the centuries.

El Camino Real follows the Rio Grande River from the U.S.-Mexico border to Santa Fe. It traverses a land rich in history and culture. The scenic beauty of El Camino Real is as varied and colorful as its culture, history, and people. From the low-lying flatlands of the south to the soaring peaks of the northern mountains, the terrain climbs 10,000 feet in altitude, creating a landscape of dramatic contrasts.

Many archaeological attractions are found along El Camino Real in New Mexico. Kuana Pueblo was one of the Rio Grande Valley villages visited by Francisco Vasquez de Coronado in 1540. He called this region the Tiquex Province because its inhabitants spoke a common language, Tiwa. Abandoned before the 1680 Pueblo Revolt against Spanish rule, this large and important site, called the Coronado State Monument, has been excavated and partially restored.

The San Miguel Mission in Santa Fe was established in the early 1600s. Records of its early history were destroyed during the Pueblo Revolt, but the adobe walls were left unharmed. In the early 1700s, the mission walls were reinforced with stone buttresses. An audio presentation is available for visitors.

More than 15,000 petroglyphs have been carved into the lava rock that covers the mesa west of the Rio Grande. The earliest of these rock drawings were made by prehistoric inhabitants almost 3,000 years ago. Many others were added by Pueblo peoples, and more were added later by Spanish explorers and settlers. This gallery of ancient art is interpreted at Petroglyph National Monument.

The cultural landscape along El Camino Real includes a rich variety of people and places. A number of American Indian Pueblos played a significant role in the history of El Camino Real, particularly in establishing trade routes before the arrival of the Spanish.

Some pueblos are open to the public year-round and encourage tourism and recreation. Others are open only by invitation during special events (such as feast day celebrations and dances). In addition, the cultural history of New Mexico and El Camino Real can be enjoyed at a number of museums throughout the byway, including the Maxwell Museum of Anthropology in Albuquerque and the Geronimo Springs Museum in Truth or Consequences.

El Camino Real is one of the most important historic trails in New Mexico. The northern portions of this byway followed the Rio Grande Pueblo Indian Trail, which existed for centuries before the Spanish explorers arrived. This route allowed the Pueblo Indians of New Mexico to have interregional trade with the pre-Columbian Indian civilizations of Mesoamerica. Throughout the byway, you'll discover many historic places to visit.

The Lower Sonoran life zone covers much of the southern quarter of El Camino Real. At an altitude below 4,500 feet, these arid flatlands support cholla, prickly pear, creosote, and yucca, along with cottonwood, olive, and cedar trees.

The Upper Sonoran life zone, ranging in elevation from 4,500 to 6,500 feet, encompasses the northern two-thirds of New Mexico. As in the Lower Sonoran, cacti and desert grasses thrive, but pinon and oak trees replace the yucca and creosote. In Santa Fe, the Transition zone (6,500 to 8,500 feet) consists of ponderosa pine, oak, juniper, spruce, and Douglas fir.

You'll find many natural features along El Camino Real, including the Sandia Mountains and other mountain ranges, many national forests, and several national wildlife refuges.

Enjoy mountain scenery, visit historical American Indian sites, and explore some of the beautiful cities of New Mexico as you follow this map of El Camino Real.

El Camino Real provides a wealth of recreational sites and facilities for visitors to enjoy. Recreational sites lure many outdoor enthusiasts to the Land of Enchantment. Elephant Butte Lake State Park, the largest lake and park in New Mexico, hosts more than a million visitors every year. It has more than 200 miles of shoreline.

Considerations: During the winter, there are frequent snowstorms. An especially dangerous area during a snowstorm is La Bajada, located south of Santa Fe en route to Albuquerque. As you travel farther south and the elevation decreases, the temperature increases on a year-round trend.