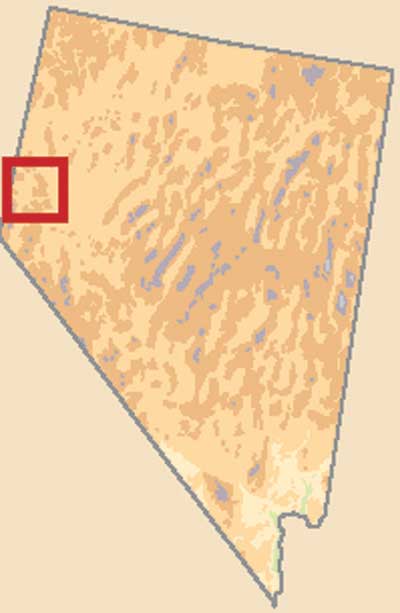 The Pyramid Lake Scenic Byway is a bright jewel in the arid Nevada landscape. Fish, animal, and plant life are sustained by its 300-foot-deep waters and by the fresh water flowing in the Truckee River. In addition to the cui-ui fish, an indigenous species found only in Pyramid Lake, the lake is known for the Lahontan cutthroat trout that the Native Americans manage through their fisheries program.

The mountains surrounding the lake support deer, antelope, and bighorn sheep. The lake is also a resting place for a variety of migrating waterfowl. Anaho Island, a National Wildlife Refuge, is the breeding ground for a large colony of American white pelicans. It is also home to a variety of other shorebirds.

The tufa formations found at this lake are some of the lake's most distinctive natural features. These formations are calcium carbonate deposits formed by precipitation over hot springs. They include the Pyramid (which gives the lake its name) and the Needles.

Since time immemorial, the Northern Paiute people comprised many bands that occupied northwestern Nevada and southeastern Oregon. By roaming in small, family-centered groups, these remarkable people developed an ingenious technology that made life possible in a high desert environment. One band centered its territory around Pyramid Lake and were called Kuyuidokado, or cui-ui eaters.

On display at the Pyramid Lake Visitor Center are tools and artifacts that reflect the ancient culture that was essential to these peoples' survival. Much of the collection has established a timeline for archaeologists in determining when these tools were used.

The Pyramid Lake Paiute nation is governed by ten council members who are elected biannually in December and on staggered two-year terms. The majority of enrolled members, numbering around 1,700 people, reside on the Pyramid Lake Indian Reservation, and approximately 12 percent of this membership live in other areas throughout the western United States.

There are strong cultural ties between the lake and the Kuyuidokado. Unfortunately, the cui-ui fish are endangered.

So are the Lahontan cutthroat trout, which are also indigenous

to Pyramid Lake and Truckee River. The Kuyuidokado feel it is their duty to save these two fish species because they consider themselves the keepers of the lake.

Hundreds of years before settlers traveled through Nevada, the Paiute Indians lived near Pyramid Lake, then called Coo-yu-ee Pah. Their traditional culture was centered around the lake. The Paiute depended on the cui-ui fish to survive.

Unfortunately, in 1859, the Paiute Indian Reservation was formed, giving only a fraction of the land to the Paiute people. They continued to live as they had been and create a culture rich in history and family.

The present name of the lake was given by John C. Fremont in January 1844. The first band of explorers stumbled upon the lake after a difficult journey through the harsh desert that lasted several weeks. They pitched their camp near a striking 400-foot-high rock island outcropping. Fremont wrote in his journal on January 14 and suggested a name for the fascinating lake: Pyramid Lake. The explorers were also captivated by the stone needles, pinnacles, and steaming sulfur springs, which the Paiute people still hold sacred today.

The present-day vision of Pyramid Lake took millions of years to form. It is the remnant of an inland sea, Lake Lahontan, which covered more than 8,000 square miles about 11 million years ago.

Today, Pyramid Lake is 26 miles long, 4 to 11 miles wide, and 350 feet deep at its deepest point. It has been called the world's most beautiful desert lake and presents a range of colors from turquoise to emerald green to deep blue.

Because Pyramid Lake used to be part of an inland sea, it is a very alkaline lake, the type found in semiarid or arid environments. Visiting the lake is almost like going to the beach. Unlike the beach, however, Pyramid Lake has a number of interesting formations scattered around and throughout its waters. The lake is also home to a variety of wildlife that visitors usually don't see at the beach.

Tufa needs just the right kind of conditions to form, and Pyramid Lake is the world's largest producer of tufa rock. It is created when the following environment is present: a stable lake, a source of calcium, high water temperatures, and a stable bedrock or substrate. When all of these conditions are present, all that is necessary is a branch or rock around which the carbonate can form.

Pyramid Lake demonstrates its age through the tufa formations. Changes in color and texture of the rock, as well as primary silt level changes, also indicate what kinds of weather Pyramid Lake has survived, including winds, droughts, floods, and glacial activity.

Other tufa formations attract attention, too. The primary area, the Needles, is located at the northwest end of the lake, in the hot springs area. This area of continuing geothermal activity contains more tufa deposits than anywhere else in the world.

Other types of formations exist around the lake, such as the Stone Mother and her basket. The basket is actually a rounded, hollowed rock, but a legend exists about the Stone Mother that goes like this: In the ancient days, a mother had four sons. They could not get along and were forced to leave. Their mother, in terrible grief, sat in the middle of the desert and cried so many tears that they filled the lake. She was in such despair she just dropped her basket beside her, and then the mother and her basket turned to stone.

Anaho Island, located in Pyramid Lake, is a National Wildlife Refuge that is one of only eight nesting grounds for white pelicans in North America. As many as 9,500 pelicans nest on the island in the spring, so both the federal government and the Paiute people carefully protect the island from intruding boats or visitors.

The best place to view the pelicans is from the southeastern or southwestern shores with binoculars; the best time of year to see them is March through October. Numerous other types of birds -- including double-crested cormorants, California gulls, blue herons, golden and bald eagles, rock wrens, owls, falcons, snowy egrets, and California quail -- draw bird-watchers.

Because the nature of the lake is so well protected and preserved by the Paiute, an uncommon amount of wildlife lives undisturbed at Pyramid Lake. Not only do many birds live here, but also burros, bighorn sheep, bobcats, wild horses, mountain lions, pronghorn antelope, coyotes, and jackrabbits. There are few spots in the county where visitors can see such a range of wildlife.

Pyramid Lake offers all kinds of opportunities to enjoy the surrounding nature. You can hike, rock climb, ride horseback, backpack, and so much more. And, after a full day of activity, hot springs at the north end of the lake among the needle rocks allow you to relax while enjoying Pyramid Lake's famous tufa formations.

The lake itself draws the most recreationists; it is a favorite of anglers, who throughout the history of the lake have gone from fishing as a means of survival to fishing as a business venture to fishing for sport.

Fishing at Pyramid Lake is an experience all its own. The water is unlike most lake water and is a startling pastel blue. The surroundings are pure desert, with little vegetation.

After some practice, many fishers have discovered that the best way to catch fish in Pyramid Lake is from the top of a five-foot ladder or other tall object. The fish come into the shallows, and the added altitude gives anglers a better view, as well as a longer casting range. Be careful, though. While you can see the fish, the fish can also see you. Fish often roam the edges of the lake near a series of ledges or drop-offs. If you stand on a tall object and wear polarizing lens, you can actually see the fish take the fly ten feet away.

Pyramid Lake has also been known for the size of its fish, especially the cutthroat trout. In 1925, a Paiute named Johnny Skimmerhorn caught the world's record cutthroat -- a 41-pounder. Photographs from the '20s and '30s show celebrities such as Clark Gable struggling to hold up a pair of massive cutthroat. Another photograph shows a group of Nevadans peeking out from behind a line of shimmering fish that stretches eight feet long from a day's catch. Unfortunately, the fish are no longer as large due to extensive fishing, but five-to ten-pounders are not uncommon.

Cities it runs through: Sparks

Considerations: Many of the road shoulders are sandy, and vehicles can get stuck easily. The best place to fill up with gasoline is in Wadsworth, near I-80.