Highlights of The Las Vegas Strip 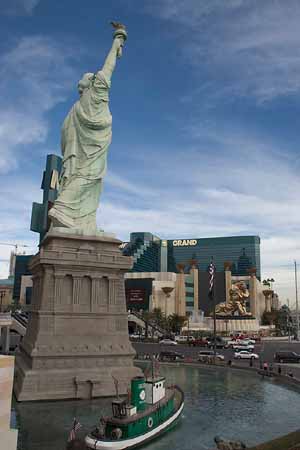 New York, New York is one of many casinos off the Las Vegas Strip.

The Las Vegas Strip is one of the most geographically isolated major cities in the continental United States, providing visitors with an extraordinary visual experience. The matchless Las Vegas Strip serves as the gateway to a host of memorable experiences that are distinctly Las Vegas. The strip's incredible array of resorts are constructed around themes that transport visitors to different exotic realms, including a medieval castle, the Parisian Eiffel Tower, a lakeside Italian village, and a pyramid in ancient Egypt. Day or night, the Neon Trail provides a fascinating foray past spectacular resorts that offer a variety of visual delights to pedestrians and motorists alike.

The Southern Las Vegas Strip Walking Tour begins at Las Vegas Boulevard and Russell Road, although you can go the opposite way by reading this list from the bottom up.

Mandalay Bay: Park the car at the free parking garage at Mandalay Bay (most of the large hotels offer plenty of covered free parking). Explore the tropical-themed hotel, including a fun sand and surf beach. Mandalay Bay is one of the newest hotels on the strip (built in 1999), and that makes it a popular attraction.

Luxor: From Mandalay Bay, you can walk north to Luxor, the great black glass pyramid. (If you prefer, hop on the free tram that takes you right to the front doors of Luxor -- you may want to save your energy for later in the trip.) While at Luxor, don't miss the King Tut Tomb exhibit, an exact replica of the ancient Egyptian pharaoh's tomb. A rotating IMAX film experience is also a popular attraction here. This unique hotel is amazing and has one of the largest atriums in the world.

Excalibur: After spending time at Luxor, hop on the tram that takes you over to Excalibur. This is the place for an exciting dinner and show. The majestic castle offers adventure at its Fantasy Faire Midway, an arena of games appropriate for everyone in the family.

New York: After spending time at the medieval castle, cross the over street walkway into 1930s- and '40s-inspired New York-New York. Billed as "the Greatest City in Las Vegas," New York-New York has attractions that are all themed to the New York life. Park Avenue shopping, a fast-paced Manhattan roller coaster, and Greenwich Village eateries help keep the theme intact.

Monte Carlo: It's not time to stop yet. The Monte Carlo, just north of New York-New York, is just as classy, but with a purely European twist.

Bellagio: After a jaunt to Monte Carlo, walk farther north, getting close to the halfway point. The big lake and fantastic fountains are part of Bellagio, a hotel that strives for utter perfection. Check out the art gallery here; it houses some fantastic pieces. The gallery has original paintings by van Gogh, Monet, Renoir, Cezanne, and other masters.

Paris: Now, at Flamingo Road, cross the street to the east -- over to Paris. This is the midpoint of the tour, and this area is full of places to sit and rest or to grab a bite to eat. While at Paris, tour the Eiffel Tower. This is an exact replica, in half scale, of the original in France. The plans for the original were lent to the developers of the hotel so they could be as accurate as possible. There's also a two-thirds-scale replica of the Arc de Triomphe near the hotel entrance -- complete with Napoleon's victories inscribed on it.

MGM Grand: Head south to the next stop on this tour, the MGM Grand. This very large hotel strives to make visitors feel like stars. Elegance abounds at this hotel. Don't miss the Lion Habitat here: a walk-through tour that showcases beautiful lions, some of which are descendants of Metro, the MGM marquee lion. The only thing separating you and the lions is a glass wall on both sides.

Tropicana: Just south of the MGM Grand is the famous Tropicana, home to the longest-running show on the strip: Folies Bergere.

Glass Pool Inn: After the Tropicana, cross the street again and take the tram from Excalibur to Mandalay Bay. At Mandalay Bay, get back in your car and cross the street to see the Glass Pool Inn. This motel was originally called Mirage Motel but sold the rights to its name to the much larger entity many years ago. The motel features an unusual above-ground pool with portal windows that has been featured in many movies.

Strip: Finish off the tour of the Southern Las Vegas Strip by driving north back past the Tropicana and MGM Grand and beyond. The drive provides amazing views that you may have missed on the walk.

As you can see, you don't have to be a gambler to enjoy the Las Vegas Strip.