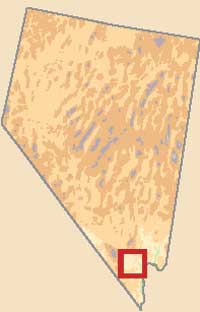 The Las Vegas Strip is often referred to as the Jewel of the Desert because of its reputation as the entertainment vacation capital of the country. The Las Vegas Strip -- at the heart of this playland -- sparkles like no other place on Earth.

More than 35 million visitors from around the world are drawn to the lights of the strip each year to experience its unique blend of exciting entertainment, scenic beauty, and lavishly landscaped resorts. An array of theme resorts can transport you to various exotic realms, from a medieval castle to a Parisian sidewalk cafe, a lakeside Italian village, or a pyramid in ancient Egypt.

The Las Vegas Strip hosts thousands of motorists a week; after you arrive on the strip, however, you may be surprised to find that it's also a very enjoyable walking environment.

The strip is the only byway that is more scenic at night than during the day. In fact, 365 days of the year, 24 hours a day, the Neon Trail offers a fascinating foray past spectacular resorts featuring a variety of visual delights. Whether it's pirates plundering, fiery volcanoes spouting, or tropical gardens luring the weary, the Las Vegas Strip offers a variety of fascinating visual experiences that enchant and mesmerize visitors of all ages. The many facets of this corridor make it truly a one-of-a-kind destination.

While Las Vegas is perhaps best known for its gaming culture -- the popularity and influence of which have spread to cities all over the world -- the Las Vegas Strip possesses many other outstanding cultural amenities. The diversity and magnificence of the architecture of the hotels and resorts along the strip are certainly worth noting. Some of the world's most talented architects have created complex fantasylands all along the strip. Just a few of the more recent projects include reproductions of the streets of New York, a bayside Tuscan village, the canals of Venice, and a replica of the Eiffel Tower and the Arc de Triomphe.

Many of the resorts on the Las Vegas Strip also feature world-class art galleries full of paintings by world-renowned artists, such as Renoir, Monet, and van Gogh. Other resorts hold galleries of unique items, such as antique automobiles or wax figures. The Guinness World of Records Museum offers an interesting array of the unusual, and the World of Coca-Cola Las Vegas features an interactive storytelling theater.

Various hotels on the Las Vegas Strip feature a variety of top-caliber theatrical and dance shows. Several hotels and casinos host world-class sporting events and concerts featuring top-name entertainers. And no matter where you go on the strip, you are bound to run into the dazzling light displays that permeate the area. The magical re-creations found along the byway are the symbols of our society's most fantastic dreams of luxury.

Qualities of The Las Vegas Strip

The Las Vegas Strip, world-renowned for its neon glitter, possesses an equally colorful historical past. The unique history of Las Vegas is undeniably entwined with the culture of gaming.

Gambling was legalized in Nevada in 1931, and the first casino opened downtown that same year. Competition was intense, and casino builders soon were looking at land outside the city limits just south of downtown along Highway 91 (the Old Los Angeles Highway), which is now known as the Las Vegas Strip.

Most of the Las Vegas Strip is not really located within the Las Vegas city limits, but along a corridor of South Las Vegas Boulevard located in unincorporated Clark County. The area was sparsely developed until 1938, when the first resort property was built four miles south of downtown Las Vegas at the corner of San Francisco Avenue (now Sahara) and Highway 91 (South Las Vegas Boulevard). Reportedly, city officials had denied licenses to certain businesspeople with questionable connections who had applied to build a casino downtown. Undaunted, they decided to build outside the city limits, just south of the downtown district.

In 1940, construction began on El Rancho Vegas resort at the corner of San Francisco Avenue and Highway 91. The original El Rancho Vegas introduced a new style of recreation and entertainment to the Nevada desert by combining lodging, gambling, restaurants, entertainment, shops, a travel agency, horseback riding, and swimming in one resort.

El Rancho Vegas was followed a year later by the Last Frontier Resort Hotel and Casino. The well-known Little Church of the West was originally constructed in the resort's Frontier Village. Listed on the National Register of Historic Places, the small chapel has survived four moves on the strip.

One of the strip's more colorful (and infamous) characters, Ben "Bugsy" Siegel (reputed hit man for New York mobster Lucky Luciano) oversaw the construction of the fabulous Flamingo Hotel, the third major (and most extravagant) resort to be built on the strip.

Although Siegel met his unfortunate demise soon after the resort's 1946 opening, his prophecies for the future of Las Vegas came true. This new popular playground of Hollywood stars prospered, with the Flamingo setting the stage for the many luxurious resorts yet to be imagined.

As the 1950s began, only four major resorts stood along the strip, but three more major players were about to hit the scene. The Desert Inn, the Sahara, and the Sands all arrived on the strip in the early 1950s, further enhancing the strip's image as a self-contained playground by featuring elaborate tennis courts, an 18-hole golf course, larger casinos, and fabulous showrooms with Broadway's and Hollywood's brightest stars.

Las Vegas has continued to build on this legacy, developing newer and more elaborate resorts often to make certain that Las Vegas retains the image of the most fabulous playground on Earth.

Qualities of The Las Vegas Strip

The simplest and easiest recreation on the strip is strolling and sightseeing along the boulevard. Intriguing arrays of fantasylands in lush surroundings welcome you to the strip. But the excitement only begins with sightseeing. From comfortable and plush hotels to exciting displays of lights and fountains, Las Vegas creates a dreamlike environment with color, sound, and light all combined to make the experience on the strip memorable.

For the more adventuresome, roller coasters featured at several hotels provide rides that twist, loop, and turn for your delight. Other resorts provide 3-D ride films appealing to the senses of sight, sound, and motion. Many of these rides feature the latest technologies for extra thrills. Most of the resorts along the strip offer displays of grandeur for every visitor to enjoy. Anyone driving the byway can stop to see erupting volcanoes, dueling ships, dancing fountains, circus acts, and lush tropical gardens.

In addition to a variety of theatrical and dance shows, the resorts have varied spectator sports, such as boxing matches. There isn't a resort on the strip that doesn't offer visitors every amenity imaginable. World-class spas, pools, and exercise rooms are as enticing as the casinos. When you aren't searching for slot machines, you may choose to browse through the many stores and boutiques each resort has to offer. You will find everything from designer fashion to specialty candies to Las Vegas souvenirs. Whatever you choose to do, you can find it in Las Vegas.

Time to allow: From half an hour to several hours

Cities it runs through: Las Vegas

Considerations: The Las Vegas Strip is usually fairly crowded and congested. Nighttime is busier than daytime, and holidays are especially busy. This is a pedestrian-rich environment, so be on the alert when driving. Consider driving the byway once each direction. This way, you will be able to view all the sites that line both sides of the street and catch some that you may have missed.