Plenty of western trails cut through Ogallala on the eastern edge of the Western Trails Scenic and Historic Byway -- including the Oregon Trail, Mormon Trail, Pony Express, Union Pacific, and Texas Trail -- providing a wealth of frontier history. Gamblers, cattlemen, and fur traders gathered in the romping rollicking town of Ogallala in the late 1800s where liquor flowed freely across the bar, riches flowed freely across the gambling tables, and once in awhile a young cowpoke's blood flowed freely across the floor as his luck ran out at the local saloon. Originally an outpost for fur trappers from St. Louis who were able to get along with the nearby Pawnee Indians, pioneers followed as the western trails came through. But it was the coming of the Union Pacific Railroad that dramatically changed the destiny of Ogallala. Massive cattle drives from Texas drove the economy during the summer months in the latter part of the 19th century, with ten to twelve herds, each with 2,500 head of cattle, locating south of town. Various "service" industries came in each summer also, bringing a temporary population of floaters, gamblers, trades-people, and dance hall hostesses. A less rowdy town now, Ogallala encourages visitors to experience some of the frontier frolics in local attractions and to enjoy spectacular outdoor recreation just outside city limits at Lake McConaughy.

As the Western Trails Scenic and Historic Byway travels west, it follows the Oregon and Mormon Trails. More than simply pathways to the state of Oregon, they were the only practical routes to the western United States. In a 25-year period more than a half million people went West via this corridor. The wagon ruts of these intrepid voyagers are still visible at Ash Hollow. Natural features of the western Nebraska landscape provided landmarks for Native Americans and pioneers as they traveled these trails. Chimney Rock is the landmark most often noted by the pioneers on the trails and one of the most famous features of the American West. Courthouse and Jail Rocks were landmarks for the pioneers but were also used by Native Americans for sending smoke signals and camping. The story of the people and the places of the past is told at the Oregon Trail Museum at Scotts Bluff National Monument.

View Enlarged Image This map will guide you along Western Trails Scenic and Historic Byway.

Pioneers, rowdy cattlemen, and Native Americans weren't the only ones to travel along this region of the Great Plains. Western Nebraska has been sustaining life since prehistoric times. Ash Hollow State Historical Park is home to the remains of ancient rhinoceros, mammoths, and mastodons, and Agate Fossil Beds National Monument is an important source for 19.2-million-year-old Miocene mammals with interactive displays for visitors of all ages.

States it runs through: Nebraska

Cities it runs through: Scottsbluff, Ogallala

Considerations: Roads are occasionally closed in the winter due to blizzard conditions. 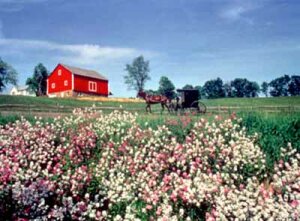