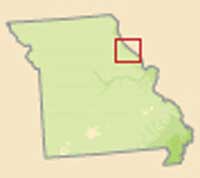 The Little Dixie Highway (also called the Mississippi Flyway Byway) is home to a culture expressing a unique Southern flair. Accents of the South are revealed in the area's Victorian-era streetscapes and plantation-era mansions. This touch of the South has earned the region its nickname, Little Dixie.

As you may expect from a region with such a diverse history, the Little Dixie Highway can boast equally varied and rich cultural qualities. Although the issue of slavery and the Civil War divided the nation, the cultural heritage of the United States proved remarkably resilient. The same can be said about Pike County, where churches and fraternal organizations helped to create a close-knit society that rebuilt itself after the war.

Clarksville's crafters have taken an active role in preserving this town's cultural heritage by restoring its historic commercial district, which is listed on the National Register of Historic Places. Artisans have performed the work necessary for the historically accurate restoration of this Victorian-era commercial district. A network of artists, artisans, and galleries, called the Provenance Project, takes an active role in promoting towns from Clarksville to Hannibal.

Perhaps more than anything else, the Mississippi River has provided this entire nation with stories. Mark Twain probably would have agreed that no single geological feature in the country could claim to be the father of a historical and cultural offspring as rich and colorful as the Mississippi River.

During the early 1800s, the river served as the edge of the West, the barrier dividing civilization from the wild frontier. As the young nation continued its growth and expansion, clashes continued between new settlers and the native peoples. Eventually, the river proved no longer to be a barrier to the frontier, but a starting line for settlers' hopes and dreams.

Missouri was a state whose role in the slavery debate proved pivotal. The plantation homes and Southern-style architecture that marks the landscape throughout the length of the byway stands as a testament to that time. As travelers look out over the Mississippi River and see the shores of Illinois just across the mighty river, they are also reminded of the fact that freedom for the slaves always lay tantalizingly close.

The stories of the struggle for justice and freedom soon turned into tales of triumph and renewal. New struggles for a new kind of justice and freedom accompanied the hope ushered in by the Emancipation Proclamation. As the nation attempted to rebuild, so, too, did the residents of Pike County work to repair the damage caused by slavery and the Civil War. The county's buildings provide evidence of the prosperous society that overcame the ravages of division.

There is nothing quite like strolling along the banks of the Mississippi. The calm waters of the giant stream seem to stretch across for miles and provide habitat for an abundance of plant life and wildlife. This particular region of the river is an important bird habitat.

A flyway is simply a path for migrating birds. The Mississippi River provides a flight corridor for approximately 40 percent of all North American waterfowl, making this a prime spot for bird-watching. In addition, the Missouri Audubon Society has documented about 39 species of migratory shorebirds in the area, such as the killdeer and the sandpiper. As if that weren't enough, the area also serves as habitat for eagles.

The Little Dixie Highway runs parallel to the area's major source of recreation, the Mississippi River. Recreational opportunities related to the river include some river islands open to the public; great opportunities for fishing, hiking, and cycling; a few wildlife reserves; two boat launches; the Eagle Center in Clarksville; a pair of riverfront municipal parks; Lock and Dam #24 at Clarksville; and a variety of scenic overlooks.

Time to allow: One hour or more

States it runs through: Missouri

Cities it runs through: Clarksville, Louisiana

Considerations: Snowfall in January and February can close the highway until snow plowing can occur.