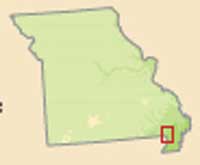 Crowley's Ridge Parkway, characterized by sand, gravel, and deep gullies, has formed a primary route of transport and commerce for the people of this region for centuries. Various peoples have used the ridge to escape the swamps and wetlands. A combination of land travel on the ridge and connecting rivers provided a means of subsistence over a vast corridor.

The earliest recorded cemetery in the New World is found in Greene County, Arkansas, on Crowley's Ridge. Excavated in 1974, the Sloan Site was both home and burial ground for a small group of Native Americans who lived here approximately 10,500 years ago. Living in small bands in semi-permanent villages, they established the earliest documented cemetery in North America.

The Mississippian site of Parkin is now the Parkin Archaeological State Park in Cross County, Arkansas, and provides a museum, visitor center, walking tour, and research station. This site features a rectangular planned village of 400 houses, with a plaza surrounding mounds and evidence of a large population that interacted with the de Soto expedition.

Crowley's Ridge, with its heavy clay and gravel, proved to be a focal point for the historical and cultural events that shaped the region around it. From the unique plant life of the ridge to the lowland swamps, this region is a story waiting to be told.

The first known Native Americans were known as the Mound Builders. They date from A.D. 900 to 1500 and were agriculturists who lived in permanent villages. They made ceramic pots and various utensils, some of which remain on and below the surface today. Sizable collections of these artifacts can be found in the small museums throughout this region. Huge collections also exist at Arkansas State University and Southeast Missouri State University. However, these mounds are being challenged by the migration of a rice-planting culture and the disastrous raids of illegal collectors and artifact thieves.

The early European immigrants to this region were German, Scots-Irish, and English. Many of them came from Virginia, Tennessee, Kentucky, and Mississippi, and they brought African-American slaves with them. The byway intersects many of these ethnic islands that have shaped the history and culture of the region. The migration of the cotton culture brought a lifestyle that continues to influence local food, architecture, family values, and religion. Midwestern barns and Southern homes and churches can be found as well.

There continues to exist in this region what the residents call the Chalk Bluff Trail. This trail extends from Cape Girardeau, Missouri, to Helena, Arkansas, and runs along the high ground of the ridge. The trail was originally used by Native Americans as they moved through the region on hunting expeditions. European settlers used the trail as they migrated to the West: it was the only safe way to travel through the swamps in order to capitalize on the 19th-century opportunities that existed in what is now the great American Southwest. Crowley's Ridge was the only all-weather access for settlers to transport trade items. In the 1850s, a plank road was built from

Gideon to Portageville, providing the first east-west avenue to Mississippi River ports. The ridge became a vital highway during the Civil War, used by both Union and Confederate troops. On May 1-2, 1863, an engagement known as the Battle of Chalk Bluff occurred on the banks of the St. Francis River where it crosses Crowley's Ridge in a narrow gap. Small by most Civil War measures, the event was nevertheless significant to people in this region. Local cemeteries contain graves of both Union and Confederate soldiers.

Following the Civil War, many changes occurred in this area, including a restructuring of agriculture and technology that provided for increased farm size. New plows, threshers, seeders, and shellers allowed farmers to work more acres and increase yields per acre. This put more pressure on transportation and further changed the region. The importation of cotton added to the region's transformation. Cotton farmers from the deep South came into the region as they tried to escape the boll weevil, which had temporarily devastated their lands and crops. Droughts in the 1930s withered those crops, however, and brought government programs to the area. In 1933.Congress passed the Agricultural Adjustment Act, which sought to stabilize agriculture. Soil conservation acts also impacted the region and reflected the changing nature of the times. Those benefits that came into the area generally went to the large planters, while little went to the growing number of sharecroppers and tenant farmers.

The land on and around Crowley's Ridge was generally worked well into the 20th century by sharecroppers who lived at the poverty level. The Southern way of life that existed in this area meant that there was little in the way of a middle class. African-Americans in the region were almost entirely in the sharecropper class. This system was widespread across the South in the aftermath of the Civil War, but was especially rigid in the new cotton lands of southeast Missouri. This situation led to one of the greatest stories to come out of Missouri in the 20th century, the story of the sharecropper strike of 1939.

The problems that plagued farmers in this region are still the same today in southeast Missouri. The large farm operator, through increased mechanization, has been able to survive and prosper, while the small farmer (and there are many in this area) has had little economic success. As farms continue to grow larger, owners of small farms have been forced to abandon both their land and their hope. Many have moved to larger cities or taken employment outside the farm. The area around the ridge continues to decline in population while land values increase.

This map will guide you along Crowley's Ridge Parkway.

Crowley's Ridge begins south of Cape Girardeau near Commerce, Missouri. It moves west in an arc, coming back to the great river near Helena, Arkansas. The last period of glaciation, some 15,000 years ago, caused massive buildup and melting of the glaciers that resulted in great floodwaters beyond modern imagination and created the Ohio and Mississippi Rivers as marginal ice streams. The Mississippi was west of Crowley's Ridge, the Ohio River to the east. The old route of the Mississippi may have followed the course of what is now the St. Francis River. Following the last ice melt, the Ohio joined the Mississippi River just south of the Thebes Gap at Cairo, Illinois. The narrow band of uplands known as Crowley's Ridge is the only remaining remnant of this story. The current river system moved to the east and left Crowley's Ridge.

Crowley's Ridge is a unique landform that is effectively isolated like an island in the middle of a small ocean of land. Plants and animals that inhabited the ridge were isolated and cut off from their natural migratory patterns, so a number of rare or endangered plants and animals are indigenous to the ridge. Of the various natural communities on the ridge, the rarest are the plants that occur along the seeps, runs, and springs. Nettled chain fern, yellow fringed orchid, umbrella sedge, black chokeberry, and marsh blue violet are some examples of these rare and exquisite plants.

The natural changes that happened in the landscape affected not only plants and animals but humans as well. Some historians contend that Hernando de Soto was the first white explorer to reach Crowley's Ridge. If he did so, it remains unclear exactly where he made his first entrance into what is now Missouri. If and when he crossed the Mississippi River above Memphis, it is likely that he and at least some of his men followed American Indian and animal trails to the high ridge into present-day Dunklin County, Missouri.

As other immigrants from all parts of northern Europe moved west, they generally moved down the Ohio, crossed the Mississippi, and landed on the Missouri shoreline. This landing usually occurred at Norfolk Landing, located south of Cairo, Illinois. From there, immigrants would cross the alluvial "prairie" swamps and head to the high ground of Crowley's Ridge. As early as the 1850s, there was discussion and even plans to drain the great wetlands. However, it was not until the early 20th century that the Little River Drainage District was formed and systematic and extensive drainage occurred.

Lumber companies moved into the region after 1913 when the massive log drives on the Mississippi were stopped by the Keokuk Dam. Soon, the region was a timberless, uninhabitable swamp. The Little River Drainage District did the rest. In what is the greatest land transformation in history, southeast Missouri was moved from natural wetland to field and farm in less than half a century.

Time to allow: 30 minutes or more

States it runs through: Arkansas, Missouri

Cities it runs through: Campbell, Malden

Considerations: Plenty of services are available along the route for any special needs; however, watch your engine temperature so that you notice if it begins to increase.